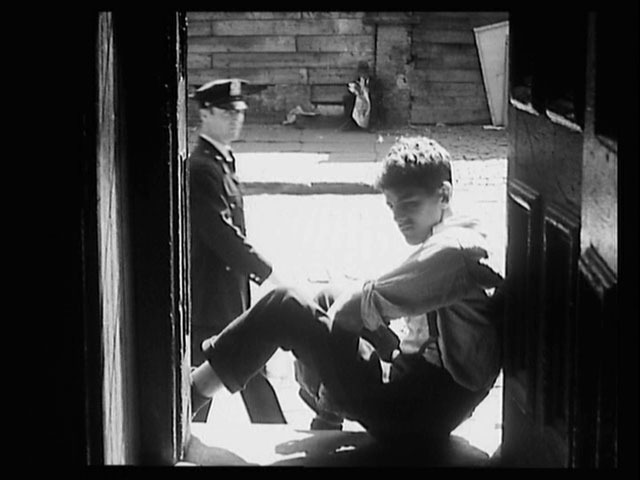 This plea to reduce the growing numbers of imprisoned youths, with its warning from the celebrated warden of Sing Sing prison, is drawn from the October 1, 1934, issue of Hearst Metrotone News. The segment’s dynamic visuals, on-camera personal appeal, and extended length make the story atypical for a newsreel, but the form’s usual breathless pace is applied to a cautionary fable: the too-frequent “road” of youth from school through unemployment, homelessness, and crime and on to the gates of the penitentiary.

In 1934, the Depression showed few signs of abating, and the federal government estimated that some 3 million young men and women between 16 and 21, or more than a quarter of those in that age span, were out of school and unemployed. About 60,000 in that age group had been incarcerated for some period over the course of 1934—the “flood of youth to prison” that menaces the nation in the film’s opening title.

Sing Sing, at the time New York State’s largest prison, housed some 2,400 inmates. Its location on the banks of the Hudson River about 35 miles north of Manhattan led to the euphemism of being sent “up the river.” The imposing layout of Sing Sing’s original four-story, 500-foot-long cell block was the source of another incarceration euphemism: being sent to “the big house.”

To a degree difficult to imagine now, Sing Sing’s warden, Lewis E. Lawes (1883–1947), was a multimedia star, and audiences for this film would have recognized his name, reputation, and voice. Prison life in the early-Depression, late-Prohibition years was more fully a part of popular culture than at perhaps any other time. Alcatraz had opened two months before this film was released, with Al Capone among the headline-grabbing prisoners. Both The Big House and Up the River were titles of major Hollywood films in 1930. The latter, directed by John Ford, featured Warden Lawes’s nine-year-old daughter, Joan, whom Ford had spotted playing comfortably among the prisoners when Fox Films shot the nonfiction short A Day in the Life of Sing Sing earlier that year.

Lawes had been appointed to the maximum-security facility in 1920 after overseeing a “prison without walls” for youths—the New York City Reformatory for male juvenile delinquents—and found himself at the end of his first week at Sing Sing having to supervise an electric-chair execution. His understanding of criminal psychology and social innovations—including Sing Sing’s celebrated baseball and football teams, the Black Sheep—brought criticism from New York judges, who lectured him about making things “too easy” on inmates. But his position, which he kept through 1941, made him America’s best-known authority on penal reform, and he used it to speak out against capital punishment and express his bedrock philosophy that prisons themselves were evidence of society’s failures. FBI director J. Edgar Hoover, never one for rivals, sneered at Lawes for presenting “the convict as a ‘human being.’”

Lawes’s views were first publicized in the prison’s widely circulated newspaper, the Sing Sing Bulletin. Time magazine put Lawes on its cover in 1929, and the best known of his four books, 20,000 Years in Sing Sing, was the May 1932 Book-of-the-Month Club selection. The book was adapted very loosely the same year by Warner Bros. as a prison drama with Spencer Tracy, but Lawes didn’t mind the distortions if the movie led audiences “to think more about the inequalities of capital punishment.” Lawes was most intimately known through the weekly NBC radio series 20,000 Years in Sing Sing, which began its six-year run early in 1933. Most episodes opened with Lawes inviting us into his office, where he introduced a dramatization of a crime, and ended with his return to draw the moral in the punishment.

When Lawes brings us into his office for A Call for Help from Sing Sing!, he warns that we “may be shocked” by the age of the convicts (in their identity-protecting but ludicrous masks), and indeed, boys as young as 16 were at that time incarcerated there. The Hearst newsreel narration presents the film as a warning to “every father and mother in the nation,” but Lawes is also arguing for the government’s responsibility to provide employment, beyond the other New Deal programs he mentions.

Lawes had a light, populist touch and enjoyed the comic appropriateness of his name for his job. In 1933, he had made a little public event out of joining the International Itinerant Workers Union—otherwise known as the Hoboes of America. He received his membership card after reciting its oath in support of youths: “I pledge myself to assist all runaway boys and induce them to return to their homes and parents.”—Scott Simmon