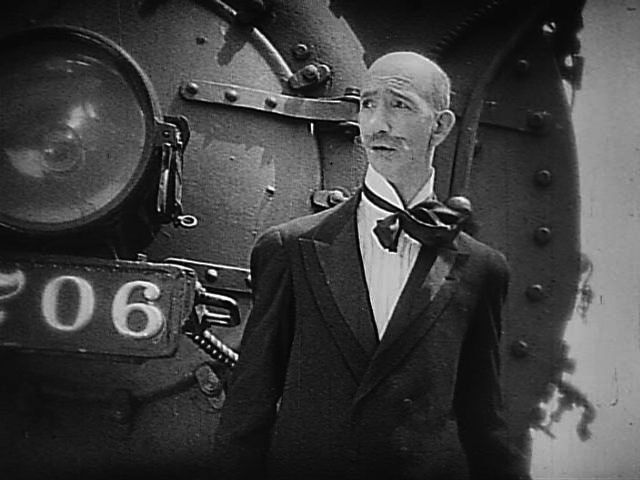 Released the day before the 1924 U.S. presidential election, the two-reel comedy Andy’s Stump Speech follows the presidential campaign of an unlikely candidate: funny-paper favorite Andy Gump, the clueless husband at the center of The Gumps, the comic strip about an ordinary family created by Sidney Smith for the Chicago Tribune in 1917. In the long-running strip, Andy bid for office in nearly every election between 1922 and 1958, providing an everyman’s satire on the political process. While not the first cartoon character to run for president—a distinction claimed by Augustus Mutt, later of Mutt and Jeff—he was the first to become a multimedia celebrity and cleared the path for Alfred E. Neuman, Zippy the Pinhead, and others.

The Gumps was an early continuity comic, with elaborate story lines extending over many individual strips. It was immediately popular and by 1919 syn-dicated across the nation, creating a built-in audience for the first series of Gump movies (all now lost), one-reelers released between 1920 and 1921, which combined live action with brief animated cartoons. The Gump family moved up in 1923 to two-reel, entirely live-action comedies for Universal Pictures, with Joe Murphy, one of the original Keystone cops, as the bald, chinless lead. Pioneering movie comedienne Fay Tincher, who had run her own production company in the late 1910s, played Andy’s long-suffering wife, Min, routinely summoned to his rescue with the yell of “Oh Min!” Jack Morgan took the role of Chester, their son. Wealthy skinflint Uncle Bim does not appear in Andy’s Stump Speech, although as evidence of a planned “economical administration” Andy offers a campaign promise that Uncle Bim will be appointed secretary of the treasury. (He is in Uncle Bim’s Gifts [1923]—the first of Universal’s 49 Gump films—also previously thought lost and preserved through this New Zealand project.)

Smith had drawn Andy running for Congress in the election of 1922 (on the “Laundry ticket, of 105% Americanism”) and had him step up for his first presidential bid in 1924. Also issued for fall 1924 was Smith’s book Andy Gump: His Life Story, a campaign biography. Andy’s Stump Speech takes the presidential hopeful from his vacation retreat to his first campaign whistle stop. Clothes-hungry goats, a train collision, a clog-dancing competition, bees in trousers, a demolition blast—few candidates today could stand up to the obstacles thrown in Andy’s way. But the “People’s Choice” floats above it all, thanks to the comedic timing of Murphy and direction from 25-year-old Norman Taurog, later at
the helm of eight Jerry Lewis movies in the 1950s and nine Elvis Presley ones in the 1960s.

Newspapers running The Gumps in 1924 continued the fun, printing campaign articles purportedly penned by Andy (who, on receiving the nomination, wrote that “tears welled from my eyes as cheer upon cheer rose from the throng”), holding debates, and even going so far as to file campaign expense reports. Chambers of commerce sponsored campaign stops, where Andy was usually impersonated by locals. (In Seattle, reported a national newspaper, a doctor playing Andy was greeted by the mayor and given a “triumphal pro-cession…proceeded by a delegation of city leaders in autos which bore signs bearing the words of Mr. Gump’s slogans.”) No doubt 1924 voters were starved for comedy. President Calvin Coolidge, dubbed “Silent Cal,” was never known for his wit. A New York Times headline, after Al Jolson visited the White House, read “President Almost Laughs.” “Keep Cool with Coolidge” was his laidback reelection slogan, and Andy was often on fire. In Andy’s Stump Speech he’s singed twice—in a smokehouse and by dynamite.

As the election neared, things were looking good for Andy, at least among moviegoers. In a straw poll taken of audiences in Chicago’s La Salle Theater during the last week of October, he lost to Coolidge by only 10 votes (with 1,637 votes for the current president; 1,627 for Andy; 1,215 for Robert La Follette, the Progressive Party candidate; and an unreported number for the Democratic nominee, John W. Davis of West Virginia). In another poll at the Randolph Theater in Chicago, Andy and Coolidge were dead even. The joke wasn’t meant to be carried to the ballot box, but when 1924 election results were tallied, more than 100 voters had written in Andy Gump. —Scott Simmon

About the Preservation
A complete 35mm nitrate print of Andy’s Stump Speech was received by the New Zealand Film Archive from Morris Jackson. Thanks to a gift from Turner Classic Movies, the comedy was preserved by Film Technology Company, Inc., under the direction of UCLA Film & Television Archive. The film is part of the NFPF’s Save America’s Treasures project.