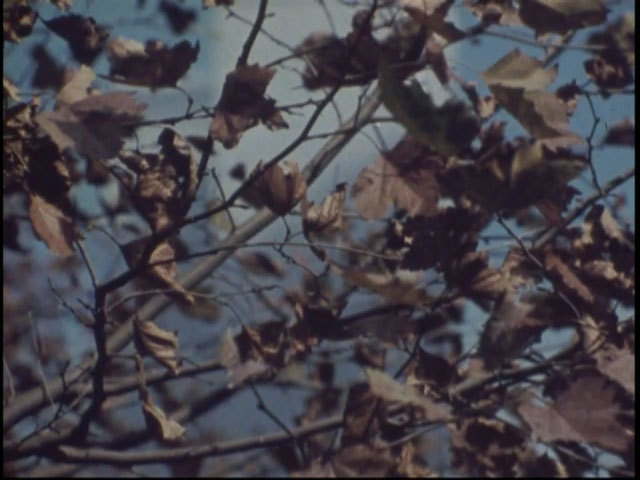 Abstract portraits of New York go back to Manhatta (1921), arguably the first American avant-garde film. The “City Scapes Trilogy,” from artist Richard Protovin and photographer Franklin Backus, extends the genre through the filmmakers’ distinctive union of docu­mentary and experimental animation. Battery Film, completed in 1985, is the final panel of the trilogy, which begins with Manhattan Quartet (1982) and Southern Images (1983). Each evokes textures of a particular place and day within a hauntingly unpeopled New York City.

A wintry portrait dated “Thursday, January 19, 1984,” Battery Film is even more evocative in the post 9/11 world. It explores a portion of Battery Park, on the southernmost tip of Manhattan. Through rack-focus shifts, the wordless film plays cold nature against gray monoliths: the twin towers of the World Trade Center and the eight marble pylons of the park’s East Coast War Memo­­rial, on which are carved the names of every soldier, sailor, and flyer who died in the North Atlantic waters of World War II. A massive American eagle sculpture stands guard over the memorial. The barren trees, the cinematography’s pale colors, the white-background line animation, and the Asian-inflected music become increasingly ghostlike. Battery Film evokes something lost by documenting the world that remains.

Franklin Backus (1940–88) developed his eye for photography from schooling in architecture and work in textile and book design. Richard Protovin (1945–91), a widely exhibited painter, established the animation program at New York University, where he was an influential teacher in the 1970s and 1980s. —Scott Simmon

About the Preservation
Battery Film is the most recent film in this anthology. Its need for publicly funded preservation reflects the larger challenge to save the works of a generation of independent artists who died young from AIDS. The New York Public Library’s Donnell Media Center collaborated with Richard Protovin’s heirs in 1999–2000 to preserve the “City Scapes Trilogy” as well as his Fan Film (1985) with funding through Treasures of American Film Archives.

About the Music
Battery Film’s score is by the Chinese American violinist and composer Jason Kao Hwang, whose recent compositions for film include the score for China: Born Under the Red Flag (1997) and source music for Martin Scorsese’s Kundun (1997). He was in the original cast of M. Butterfly, performing music he co-arranged. Available CDs from his ensemble, the Far East Side Band, include Caverns (1994) and Urban Archeology (1996).