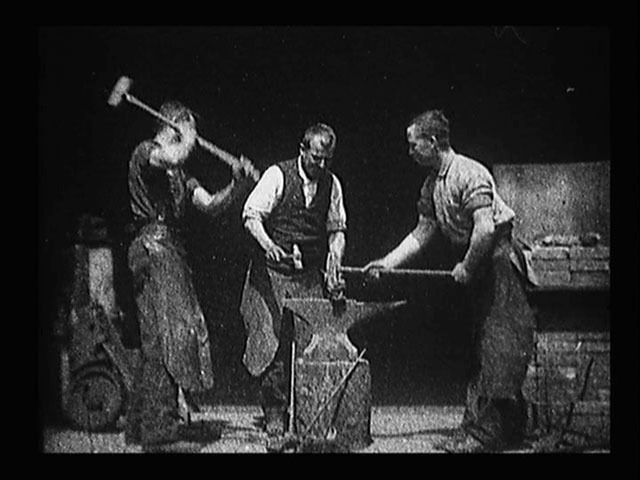 Although no one person "invented" the movies, Thomas Edison—along with his key employee W.K.L. Dickson—can claim credit for refining experimental ideas into patents that controlled the first decade of moviemaking in America.

Blacksmithing Scene, photographed by Dickson in Edison's newly constructed New Jersey studio in late April 1893, was the first film of more than a few feet to be publicly exhibited. On May 9, 1893, following a lecture at the Brooklyn Institute of Arts and Sciences, audience members lined up before Edison's viewing machine, dubbed the kinetoscope, to watch this and a second (now lost) film depicting horseshoeing. As the Brooklyn Daily Eagle reported the next day, "it shows living subjects portrayed in a manner to excite wonderment." Both films employed the newest technology to showcase traditional work—and a break for beer in Blacksmithing Scene. Because the three "blacksmiths" are impersonated by Edison employees, this is not a documentary but the first instance of screen acting. It is also the earliest surviving complete motion picture on film. Remarkably, the format chosen for Blacksmithing Scene—about 35 millimeters wide, with four vertical sprockets per frame—has remained standard, so that new preservation copies of this earliest film can still be screened by modern projectors.—Scott Simmon

About the Music
The music is based on a segment of the famous "Anvil Chorus," originally sung by a band of gypsies in Verdi's Il trovatore (1853) as some of them hammered in time to the music. The popularity and rhythmic exuberance of this music—and perhaps the fame of Edison's early film—led to its inclusion in many silent film music anthologies, often under the heading of "blacksmith" or "anvil." But this film's brevity and purely masculine point of view call for a gruff, more open-ended treatment than was ever imagined by Verdi.—Martin Marks

About the Preservation
A nitrate print of Blacksmithing Scene was found at the Henry Ford Museum and Greenfield Village, Dearborn, Michigan, and loaned in 1989 to the Museum of Modern Art for preservation copying.

Further Reading
For a history of Edison's and Porter's early filmmaking, see Charles Musser, Before the Nickelodeon: Edwin S. Porter and the Edison Manufacturing Company (1991, Univ. of California Press).