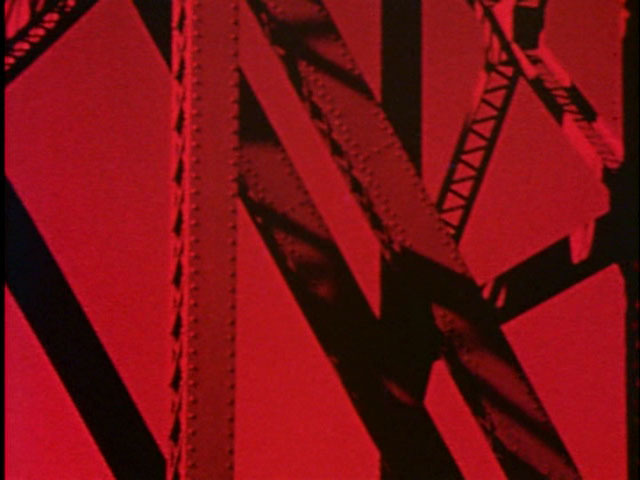 Filmmaking is an expensive art, too expensive for most artists working on their own. Struggling for a way to pursue their interests, some independents, such as Shirley Clarke (1919–97), Pat O’Neill, and Alexander Hammid, sought a creative outlet within the film industry. Sponsored films—works whose production and distribution were underwritten for a corporate purpose—proved a hospitable berth. Bridges-Go-Round grew from just this sort of commercial project.

Clarke had not planned to be a filmmaker. Born into a wealthy New York family, she aspired to become a dancer but met parental disapproval. With trust funds freed after her marriage in 1944, she pursued her dream and brokered home moviemaking skills into the production of a dance film, Dance in the Sun (1953). A series of critically acclaimed shorts brought an invitation from veteran documentarian Willard Van Dyke to collaborate on motion pictures for the 1958 Brussels World’s Fair. Also on the team were Richard Leacock, D.A. Pennebaker, and Francis Thompson.

For the exposition, the State Department commissioned a series of vignettes illustrating the American way of life. Drawing from a list of acceptable subjects, the group produced some 25 rapidly edited color “loops,” each two-and-a-half minutes long, for continuous screening in the United States Pavilion. Among the Americana showcased were Churches, County Fair, Drive-Ins, Marti Gras, Ready to Eat, Shopping Center, and The Town. The filmmakers managed to inject a degree of personal expression into their assignment. Clarke made Melting Pot and edited many of the others.

Bridges-Go-Round was crafted by Clarke from leftover project footage. In her hands, the monumental bridges spanning New York Harbor dissolve into flattened abstractions that seem to sway with the music. The dream-like quality is intensified by the vivid color, which was achieved by “bi-packing,” a process in which certain colors of the film original are altered by running the strip through the printer with a second piece of film. When rights issues threatened the use of the initial music track by Louis and Bebe Barron, who had composed the groundbreaking electronic score for Forbidden Planet (1956), Clarke asked jazz producer Teo Macero to develop a replacement. She liked them both and often screened the two versions back-to-back, as they are presented in Treasures IV DVD program.

Clarke went on to work for UNICEF and in public television before turning to cinema vérité–style features such as The Connection (1961), The Cool World (1963), and her celebrated documentary Portrait of Jason (1967). In 1962, in the firm belief that audiences would “go” for “truly creative films” if they had a chance to see them, she helped found the innovative nonprofit distribution organization the Film-Makers’ Cooperative.

More Information
Lauren Rabinowitz’s Points of Resistance: Women, Power, and Politics in the New York Avant-Garde Cinema, 1943–71 (University of Illinois Press, 2003) devotes a chapter to Clarke. Film Quarterly 13, no. 4 (Summer 1960) features a discussion with the filmmaker and Amos Vogel. Prints of Clarke’s films are available from Canyon Cinema and the Film-Makers’ Cooperative.