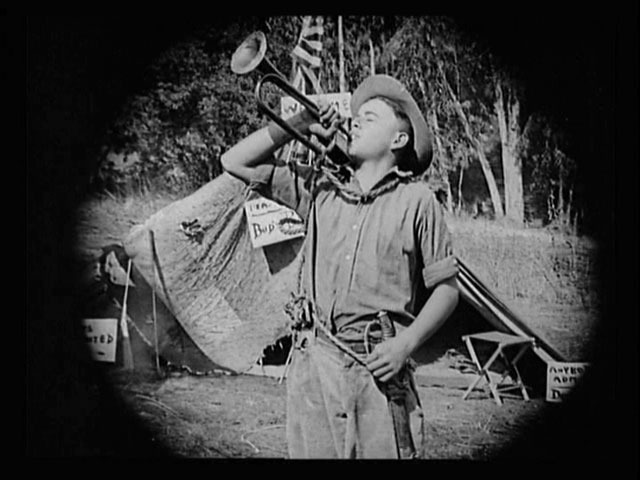 This two-reel home-front story, the earliest surviving film from King Vidor, is a pointed World War I tale about a boy who sets a patriotic example for his family. It is also the first film from the Boy City Film Company of Judge Willis Brown, former Utah juvenile court justice and founder of “Boy Cities” for the homeless. The goal of the company, which ran a studio and homeless shelter in Culver City, California, was to make “clean, wholesome, and highly entertaining stories in which the captivating humor of boy life plays a prominent part.” The films were rapidly produced, with the Vidor directing at least ten in early 1918. Except for this one, all included the judge.

Although Bud has molded neighborhood kids into a fighting unit, he must struggle bring his family into line. His effete draft-age brother shirks military duty. His mother is annoyed by Bud’s disruption of her “Peace Society” meeting and refusal of dinner on “a meatless day.” Voluntary “Meatless Mondays” were a way around wartime rationing and promoted self-sacrifice through posters like the ones displayed in the film. (Vidor’s World War I masterpiece, The Big Parade (1925), opens with a similar doting mother and her initially slacker son. But seven years had given Vidor, and America, time to come to a darker understanding of the price exacted for patriotism.) Of the Judge Brown series, Vidor wrote, “I deeply believed in these films and I put my heart and soul into making them.”—Scott Simmon

About the Preservation
Bud’s Recruit was preserved by the UCLA Film & Television Archive from an original print donated by Terry B. Lent. Funding was provided by Society of Cinephiles and the Silent Society of Hollywood Heritage Inc.