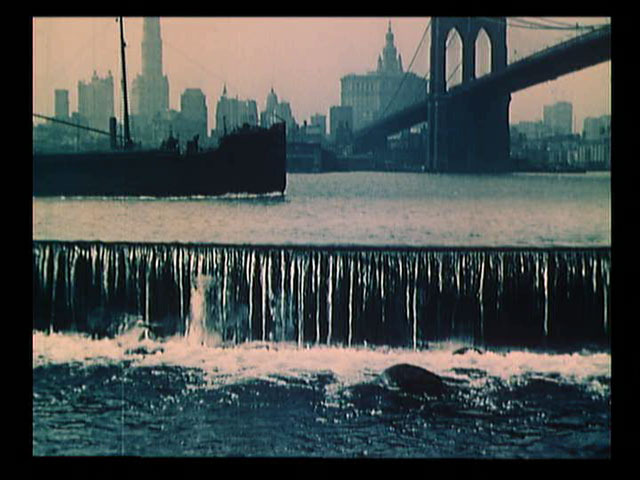 Cockeyed, which manipulates city scenes of New York into visual fantasies, is a segment from Pathé Review, a one-reel U.S. weekly begun in 1920 and promoted as “the Magazine of the Screen.” Pathé distinguished its weekly newsreel (“all news all the time”) from its lighter Review (“the best obtainable…scenics and the like”).

Subtitled Gems from the Memory of a Nutty Cameraman, Cockeyed appears to have gotten many of its effects through inventive laboratory printing techniques, although others may have been accomplished in the camera. The “nutty cameraman” was Pathé’s special effects staff photographer Alvin Knechtel, whom the company credited with “inventing” a “multiple image” camera and printer, “the sensation of the past few months in technical circles.” The “projection printer,” as the optical printer was then called (essentially a stop-motion projector mounted to shoot directly into a camera, with special lenses and masks between) had been around since at least 1902, when it was first used for reverse-motion tricks. But only in the mid-1920s did filmmakers such as Knechtel construct refined versions. Cockeyed is one of the Pathé Review “Mystery Pictures” put together by Knechtel, whose subsequent career as a special effects photographer for feature films was cut short by his death at twenty-eight. With its witty visual surprises, Cockeyed hints at how a commercial novelty can approach surrealism.—Scott Simmon

About the Music
The score for Cockeyed is by Brian Robison, an MIT colleague with a flair for things humorous, offbeat, and hip. His inventive soundscape has a thumb-your-nose spirit worthy of Dada. Here is how Robison describes the work:

“The music for Cockeyed nearly wrote itself. The film’s period and playful spirit inspired a ragtime idiom, and its fascination with the technological marvels of ships, planes, trains, and automobiles invited the use of multitracked electric guitar. Some images prompted musical quotations or paraphrases, but more helpfully for me, many of the filmmaker’s visual manipulations instantly suggested musical parallels. For example, there’s a segment in which cars travel along the same road simultaneously at two sharply different speeds; the image prompted a presentation of the musical theme combined with itself at two different tempos. The compositional devices were simply means I used toward the goal of creating music that would have sounded modern in the 1920s, but also fun.”—Martin Marks