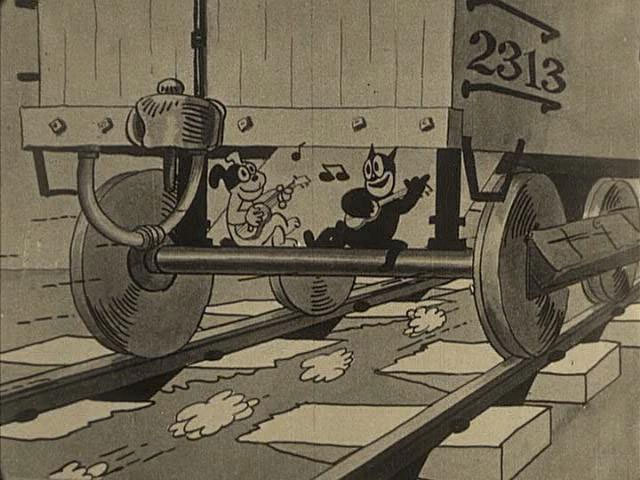 Animated cartoons weren’t produced with any frequency until 1914, but within little more than a year they became an expected part of every movie program. To meet demand producers introduced such shortcuts as printed backgrounds, transparent celluloid, and tracing paper.

The master of assembly-line animation methods came to be Paul Terry (1887–1971), best remembered for his sound-era Terrytoons but already such a success in the 1920s that a rival labeled him the first animator “to really make money in the business.” Terry had witnessed the invention of several animation time-savers during an unsatisfying year in 1916 at the Bray Studios, before he set out to produce cartoons independently, only to have that effort interrupted by army service in World War I.

By the 1920s, however, he was churning them out. Happy-Go-Luckies is one of seven of his Aesop’s Fables released in November 1923 alone, and one of more than 50 in that series from 1923. Indeed, for more than seven years beginning in May 1921, Terry and his team of animators managed to turn out one Fable each week before slowing slightly in the last years of the silent era. In all, he produced some 450 Fables in the 1920s, and they were widely distributed, thanks to a deal with the nationwide Keith-Albee theater chain. (Another lost Fable was also recovered through this New Zealand project: Henry’s Busted Romance [1922].) In a career extending into the 1950s, Terry produced some 1,300 cartoons!

Subtle wit was not a Terry strongpoint, but the animation skills on display in his Aesop’s Fables are impressive, especially considering that release pace. (Walt Disney’s earliest ambition was to produce animation of the quality of the Fables.) Each episode followed a pattern, generally centered on the high jinks of animal characters, initially under the chaotic care of “Farmer Al Falfa,” whom Terry had created back at Bray Studios. Each Fable ended with an aphorism—what the studio labeled a “sugar coated pill of wisdom”—attributed to the ancient Greek storyteller Aesop. These “morals,” as they were also called, had only the loosest of connections to the preceding story, and Terry claimed that that was part of their appeal: “The fact that they’re ambiguous makes ’em funny.”

In Happy-Go-Luckies a pair of ukulele-strumming railroad hoboes fake their way into a dog show and make off with the prize loot. “Two heads are better than one” is the moral. To modern eyes, our trickster duo may look like two dogs—in the show they pretend to be one long dog—but audiences of the ’20s would have recognized a dog-and-cat team. The black body, white face, and sharp ears would have been most familiar from the greatest jazz-era trickster cat, Felix. Dogs and cats—much easier to animate than humans—were everywhere in silent cartoons. Terry, like most early film animators, had begun as a newspaper cartoonist, and his first strip, working with his brother as a teenager for the San Francisco Call, was about the adventures of a dog named Alonzo.

Newspapers remained essential to the promotion of the Aesop’s Fables in the 1920s. The story lines of the films, rhymed ditties, and single-panel cartoons signed by Terry appeared in print across the country weekly, linked to each film release. The newspaper rendition of Happy-Go-Luckies identifies our “two merry musicians of the roadway” as “Henry Cat and Fido Dog,” who get their inspiration to roll up in a carpet to impersonate some new variety of dachshund after watching “the Frankfurter Brothers (just over from Germany).” This dog-and-cat team reappear often in the Fables, and their tricks were regularly recounted in newspapers through couplets signed by “Aesop, Jr.”—such as “Blithe Fido Dog and Henry Cat/And Milton Mouse all lingered at/A butcher shop. With craft they took/Some sausage links from off the hook,” and onward in the same spirit.

At the time Happy-Go-Luckies was made, Terry employed at least 15 animators at Fables Pictures, and several would contribute to each cartoon. As he described their methods, “Each animator is assigned scenes requiring the type of characters which lend themselves best to his talents.” The sole “cartoonist” credited on Happy-Go-Luckies’s title card is Terry, but for those who know their styles, at least two and possibly three collaborators can be tentatively identified: Frank Moser (whose distinctive moments include the showering “Water Spaniel” and the man pushing the baby carriage from which he removes the huge bottle-drinking dog), Jerry Shields (whose pieces include the dancing “Vaudeville Hounds” and the jumping crowds at the prize ceremony), and perhaps Milt Gross (who had left Fables Pictures by late 1923 but who looks to have animated the man bringing the “Frankfurter Brothers” dogs into the show). Paul Terry’s own style is evident in the “Angora Puzzle-Hound” and elsewhere. (For these educated guesses, big thanks to Tom Stathes, David Gerstein, and particularly Charlie Judkins.)

Such cartoons were seldom noticed in print, but one Maryland reviewer singled out Happy-Go-Luckies as “a very funny” entry in the Fables series. —Scott Simmon

About the Preservation
Happy-Go-Luckies was preserved by George Eastman House from a nitrate print received by the New Zealand Film Archive through Noel Pearson. The work was completed by Colorlab Corp. with funding from a Save America’s Treasures grant awarded to the NFPF.