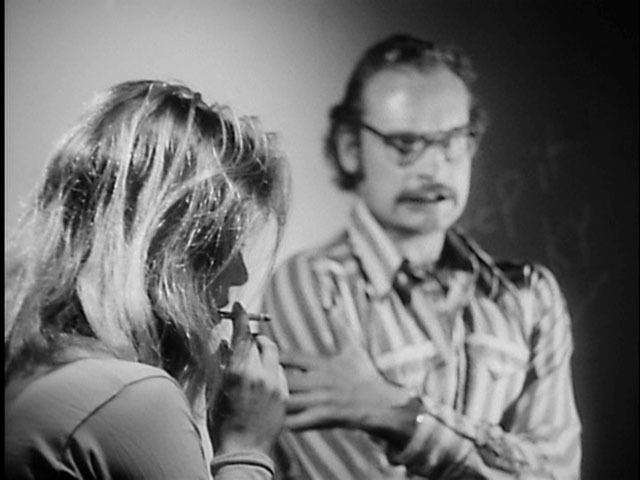 While many in the avant-garde railed against Hollywood cinema, some embraced it. George and Mike Kuchar (b. 1942) exemplify this stance. For the twin-brother filmmakers, the outrageous coincidences in melodrama, the crazy impossibilities in science fiction, and the Technicolor grandeur in costume epics were the very stuff of movies.

The Kuchars began moviemaking before their teens. Improvising props and costumes from whatever came their way, they filmed friends and neighbors in 8mm epics inspired by the Hollywood features they loved. Their nonexistent budget required imaginative solutions. George Kuchar remembers being punished for making a film starring a transvestite. His mother, he explained, “didn’t realize how hard it is for a 12-year-old director to get real girls in his movies.” Undeterred, the brothers climbed to the roof of their Bronx apartment to film an Egyptian spectacular.

While studying commercial art in high school, they tried showing their productions at a local 8mm moviemakers club, but the films were banned. Determined to find an audience, they took an assortment, including I Was a Teenage Rumpot (1960), to an underground screening at filmmaker Ken Jacobs’s loft. The films became an immediate hit and validated the camp style that became their hallmark.

“Camp taste,” writes Susan Sontag in “Notes on ‘Camp,’ ” is “a mode of enjoyment, of appreciation…. [It] is a kind of love.… People who share this sensibility are not laughing at the thing they label as… ‘camp,’ they’re enjoying it.” Extravagant and celebratory, camp films find value in the banal and unearth the comedy buried in the solemn. Perhaps no body of films epitomizes this definition as jubilantly as the works of the Kuchar brothers.

Teaching filmmaking at the San Francisco Art Institute, George Kuchar insisted that each class collaborate on a project. I, An Actress shows him in action. Student Barbara Lapsley had wanted a short film to launch her acting career, and the class obliged by staging a classic Hollywood screen test. By the time the crew was ready to shoot, only ten minutes of class time remained. In I, An Actress, Lapsley launches into her monologue, an appeal to her philandering lover—played by a draped post, topped by a wig—to abandon “rich widows with their sparkling rhinestones.” Kuchar initially gives direction off-camera but finally rushes into the scene to demonstrate what he wants. The student cannot summon up the hysterical excess of her director but finishes her screen test all the same. In Kuchar films, everyone gets a chance to be a star.

About the Preservation
George Kuchar deposited many of his films for safekeeping at the Harvard Film Archive. With the cooperation of the filmmaker and the HFA, the Pacific Film Archive created a preservation negative, a sound track negative, and viewing prints from the original elements of I, An Actress.

More Information
Jack Stevenson’s Desperate Visions: The Films of John Waters and the Kuchar Brothers (Creation Books, 1996) surveys the brothers’ work. The Kuchars tell their own story in Reflections from a Cinematic Cesspool (Zanja Press, 1997). Prints of the brothers’ films are available from Canyon Cinema and the Film-Makers’ Cooperative.