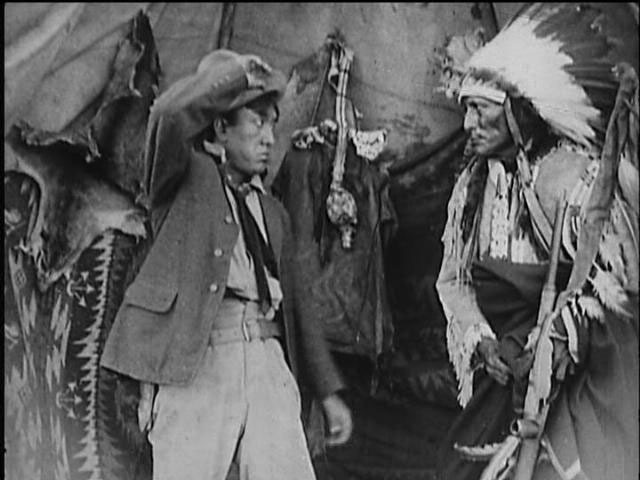 The most fascinating series of Indian Westerns remain those produced by Thomas Ince between 1912 and early 1915, of which the two-reel Last of the Line is itself one of the last. By the time of the film’s Christmas Eve 1914 release, the New York Motion Picture Corporation had become a curiously inappropriate name for a company whose films were shot primarily within sight of the Pacific in the Santa Monica “Inceville” studio and the hills above. One key to the films’ success was Ince’s hiring of skilled riders and authentic gear from the Miller Bros. 101 Ranch Real Wild West Show out of Oklahoma. More essential was the recruitment from their Pine Ridge Reservation in South Dakota of some 50 Oglala Lakota (Sioux), who play the tribe at the center of this tragedy of a chief and his white-educated son.

The first movie Westerns, made on the East Coast and off in Europe, had come to be mocked for their unconvincing Indian impersonations. As the industry trade paper Moving Picture World grumbled in 1911, “We have Indians à la Français, [and] ‘red’ men recruited from the Bowery.” But the paper’s review of Last of the Line could single out its lead: “The old Indian is fine. He has all the dignity and grandeur that one could want.” The actor, unidentified in the film’s publicity material (and sometimes misidentified as William Eagleshirt, another Lakota in the company), went by the name of Joe Goodboy. All but one other of his known films are now lost, including Ince’s The Patriot (1916), about which a reviewer noted, “Joe Goodboy drew tears from many an eye unused to weeping in the theater.” Said to be 80 at the time of Last of the Line, the actor apparently preferred not to reveal his exact age or history. Never again in Hollywood would Native Americans play themselves with such prominence and regularity as in Ince’s pre–World War I productions.

But the most surprising casting in Last of the Line is that of the chief’s drunken son, played by the Japanese-born Sessue Hayakawa. Although Hayakawa is best remembered for his Academy Award–nominated role as the prison camp commander in The Bridge on the River Kwai (1957), his remarkable career began more than four decades earlier when he rose rapidly to become one of Hollywood’s first superstars, with an international following rivaling those of Douglas Fairbanks and William S. Hart. (In 1916, the year after his star-making role in Cecil B. De Mille’s The Cheat, Hayakawa was ranked number one in a Chicago Tribune “favorite player” poll, right above Beatriz Michelena—the star of Salomy Jane, also featured in Treasures 5.) After emigrating to study economics at the University of Chicago, Hayakawa had begun stage acting when Thomas Ince signed him for the New York Motion Picture Corporation’s stock company, casting him in 1914 in two features and at least 15 shorter films, including Last of the Line. As recognized then and since, Hayakawa had a subtlety about his acting that made his costars seem even more melodramatic, and in this he shared the “restraint” praised also in Ince’s American Indian actors.

Hayakawa’s casting in the film might suggest all sorts of uncomfortable racial assumptions—by filmmakers and audiences alike—but one is reminded too of the end of Thomas Berger’s great 1964 novel Little Big Man, when its 111-year-old frontier antihero, Jack Crabb, is reduced to watching Westerns on television and continues that industry trade-paper complaint: “It gets on my nerves to see Indians being played by Italians, Russians, and the like, with five o’clock shadows and lumpy arms…. If the show people are fresh out of real Indians, they should hire Orientals—Chinese, Japs, and such like—to play them parts; for there is a mighty resemblance between them two, being ancient cousins. Look at them without bias and you’ll see what I mean.” Although that “without bias” is a nice touch, recent DNA research on the prehistoric origins of the first Americans lends support to Crabb’s notion. Playing the Sioux maiden whom Hayakawa’s character accosts at the riverbank in Last of the Line is another Japanese immigrant, Hayakawa’s real-life bride of six months, Tsuru Aoki. Ince reversed the casting in The Wrath of the Gods (1914), also starring Hayakawa and Aoki, where the Lakota play Japanese fishermen and villagers.

Last of the Line abandons the usual Indians-versus-cavalry story line for one in which the central conflict is within the tribe. One obvious criticism of the film is that it has its Indian chief accept the spiritual values of the conquering U.S. Army, which will perform the ritual of honor for his son. Against that, however, we are made to understand that the chief’s son has been ruined, before the film even begins, by two encounters with the white world with long histories of cultural devastation: the education of Native American children in government boarding schools and the introduction of alcohol into native families. Both topics made for popular silent film plotlines. The Selig Polyscope company’s Curse of the Redman (1911) had taken on the alcoholism of a Sherman Indian High School graduate, and later a string of features—notably Strongheart (1914), Braveheart (1925), and Redskin (1929)—played variations on the tale of a chief’s son lost to both cultures after years at the white man’s schools. Thomas Ince himself, who signed an agreement with the Bureau of Indian Affairs to be responsible for his Native American actors (in these years before the 1924 Indian Citizenship Act), issued threats to Santa Monica saloon keepers that he would prosecute anyone selling them liquor.

Ince’s paternalism extended to his long resistance to crediting production personnel, and Last of the Line was originally issued with no directing or acting credits. But thanks to Sessue Hayakawa’s fame just a couple years later, we have the reissue print seen here, with his name now above the film’s new title, which makes a dubious claim for the chief’s motivation in his Pride of Race.—Scott Simmon

About the Preservation
Only about 10 percent of Thomas Ince’s Westerns are known to survive. This Museum of Modern Art 35mm print of Last of the Line was struck in 2010 with support from the National Film Preservation Foundation.

Further Viewing and Reading
Oglala actor Joe Goodboy’s other known surviving film, the three-reel The Invaders (1912), is in More Treasures from American Film Archives. Ince’s two-reel The Indian Massacre (1912), with William Eagleshirt, can be seen on the Saved from the Flames DVD (Flicker Alley). The two-color Technicolor Redskin (1929) is in Treasures III: Social Issues in American Film. George Eastman House’s preservation of The Wrath of the Gods (1914) is available as an extra on the Milestone DVD of The Dragon Painter (1919), also starring Sessue Hayakawa and of interest in this context for its Yosemite Valley locations, which stand in for Japan.

About the Commentator
Stephen Gong is Executive Director of the Center for Asian American Media, which he joined in 2006 after many years as General Manager of the Pacific Film Archive and Deputy Director of the Berkeley Art Museum at the University of California, Berkeley. Stephen has also served as a media arts program officer at the National Endowment for the Arts and Associate Director of the American Film Institute’s National Center for Film and Video Preservation. He has taught in the Asian American Studies program at the University of California, Berkeley, and is featured in Arthur Dong’s documentary Hollywood Chinese (2007). Stephen contributed commentary to More Treasures from American Film Archives and Wayne Wang’s Chan Is Missing.