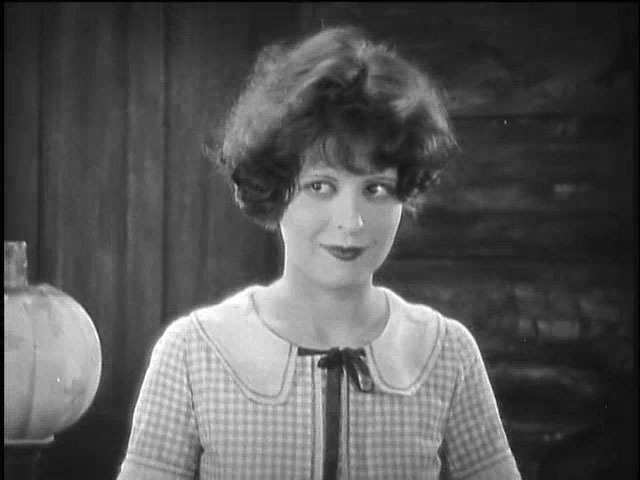 We’ve stretched the boundaries of the West to include this masterpiece of romantic comedy that transplants Clara Bow into the wilderness of central Canada. The wit and sexual energy of Mantrap are hardly diminished after 85 years. At release, reviewers savored its sophisticated play with expectations. “Whoever seized upon the chance to take the bunk out of Westerns is deserving of a gold gewgaw of some kind,” said Motion Picture Magazine; “the sponsors have worked on the premise that intelligence is abroad—that it stalks among the movie patrons now and then. As a result we have a clever take-off on the great open spaces.”

Mantrap transports urbanites into the backwoods, but it doesn’t exactly follow the comic tradition (from Shakespeare and beyond) of finding in the green countryside solutions to problems among men and women in the city. Such is, however, the anticipation of the two New Yorkers we first meet. A woman-addled divorce lawyer named Ralph Prescott (Percy Marmont) is taken in hand by a hosiery company manager, Woodbury (Eugene Pallette), to recharge his manliness through a camping trip into “the Great Outdoors” along the Manitoba-Saskatchewan border. (The fictional Mantrap River is played by Lake Arrowhead, 90 miles east of Hollywood.)

The film is based on a prestigious source, for which Paramount paid $50,000 (compared with $750 a week to Bow). Sinclair Lewis would be awarded the Nobel Prize in Literature four years later, no doubt in spite of, rather than because of, Mantrap. Lewis’s novel isn’t merely bad; it’s bad in a grumpy, misogynistic way. As in much male literary fiction of the 1920s, it’s solemnly concerned about modern threats to masculinity—which is just where the film finds its wellspring of comedy. Indeed the screenplay—credited to two women, Adelaide Heilbron and Ethel Doherty—is a brilliant example of how to adapt a barely filmable book. While keeping tightly to Lewis’s plotline, the film flips its spirit. There are hints even before Ralph meets Clara Bow’s transplanted Minneapolis manicurist, Alverna, that efforts to restore his manliness by immersion in the West may be a challenge. “Say, you look more Western than the hind end of the Covered Wagon,” Woodbury says encouragingly, as Ralph dubiously holds a six-gun in the camp outfitting store.

Woodbury’s line would also have reminded viewers of Paramount’s epic hit The Covered Wagon (1923). Paramount was in the mid 1920s the most highly regarded Hollywood studio, a judgment that still seems valid—although with 80 percent of Paramount’s ’20s features lost, it’s impossible to say with any certainty. The studio had a sideline in Westerns (which made up about 10 percent of its features in the ’20s), but it was best known for sophisticated dramas, among which were what one might call sorrows-of-the-flirt romances, where by the last reel flappers learned the errors of their freewheeling ways. Clara Bow herself was often cast by the studio in such films, including Dancing Mothers (1926) and Children of Divorce (1927) among those surviving.

Mantrap bounds past Paramount’s Westerns and its sorrows-of-the-flirt films by undercutting both types. Victor Fleming directed it with a light comic touch surprising if we remember him mainly as the single credited director of both of the most celebrated films of 1939: Gone with the Wind and The Wizard of Oz. But his work with Bow in Mantrap is closer to the knowing comic performance he elicited from Jean Harlow in Red Dust (1932), another story of erotic tension among urbanites marooned in the wilderness. Fleming, himself a Westerner (born in California in 1889), had started his career with satires about revitalized masculinity in Douglas Fairbanks’s modern Westerns, as cinematographer on Wild and Woolly (1917) and director of The Mollycoddle (1920), in which the over-Europeanized Fairbanks character proves his manhood on a Hopi reservation.

For Mantrap Fleming found support behind the camera from the versatile James Wong Howe, who would go on to shoot the noir Western Pursued (1947) and the CinemaScope Hud (1963). Among the cast, Charles Stevens, of Apache ancestry (he was Geronimo’s grandson), adds authenticity as the stealthy guide. As Woodbury, Eugene Pallette seems loud even absent his distinctive voice. Percy Marmont had starred for Fleming in the title role of Lord Jim (1925), and his qualms of conflicted honor there get a comic twist here as Ralph. Six-feet-four-inch Ernest Torrence could loom frighteningly, as in Tol’able David (1921), or comically, as in playing Steamboat Bill in Buster Keaton’s Steamboat Bill, Jr. (1928). Here he’s a giant without guile named Joe Easter who runs the trading post in Mantrap, where he has grown as weary of the male West as Ralph has of the feminized East: “I’m sick of this he-man country. My last thrill was in 1906—when I seen a girl’s ankle in Minneapolis.”

The film makes us wait 10 minutes for the entrance of Clara Bow, via her ankle, but after that she never lets go. It’s hard to disagree with the note she much later wrote to her sons on a package of production stills: “From Mantrap—the best silent picture I ever made.” Although she wouldn’t turn 21 until the week in late July 1926 that Mantrap was released, she’d been in more than 30 films over four years. This was her breakthrough. Variety opened its review this way: “Clara Bow! And how! What a ‘mantrap’ she is! And how the picture is going to make her!... Miss Bow just walks away with the picture from the moment she steps into camera range.” The Chicago Tribune’s variation was “That young sparkler, Clara Bow, almost puts your eyes out this trip! Scintillates all over the piece. She’s positively electric.”

On this disc are several women in the West who prove too much for their man, but nothing like Clara Bow’s character, who runs wild over two men. If Bow’s performance style is still underappreciated, that’s partly because distractions from her personal history can make it seem merely “natural.” In stills she looks attractive enough, but only the motion picture camera caught her magnetism. In Mantrap, with just a crooked finger, a sidelong glance, a snap of her waistband, she holds the screen like no one else.

A story line that pairs her in the backwoods with lovable lunk Joe Easter is comedy, of course, but something more too. The film rests on Bow’s emerging urban image as the ultimate party girl and flapper (she became the “It Girl” after the release of Paramount’s It the following year). Yet it helps to remember that Bow lived for two decades, from 1931, on a Nevada cattle ranch with husband Rex Bell, B-Western star and (in the 1950s) the state’s lieutenant governor. For all Alverna’s mercurial temperament, she proves the one in the film to best embody admirable Western traits: an unflagging optimism, adaptability, and willpower. Her physical strength and bravery are tested too on the forced hike through the wilderness after she and Ralph are stranded by their Indian guide. Sinclair Lewis punished his “rotten” flirt—Alverna is abandoned in the novel “sitting with her head bowed in trembling hands”—but we never much doubt that Clara Bow’s incarnation will keep her chin up.—Scott Simmon

Further Reading and Viewing
Clara Bow and Victor Fleming are both beneficiaries of keenly balanced biographies: Clara Bow: Runnin’ Wild (Cooper Square Press, 2000) by David Stenn, and Victor Fleming: An American Movie Master (Pantheon, 2008) by Michael Sragow, who provides the audio commentary here. The Bow film It is on DVD from Milestone, and Victor Fleming’s The Mollycoddle is on the Douglas Fairbanks: A Modern Musketeer DVD set from Flicker Alley.