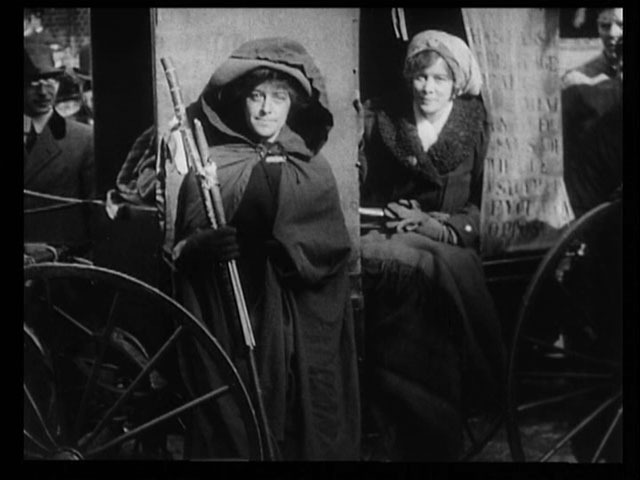 The single most effective American demonstration for female voting rights was the “Woman Suffrage Procession” in Washington, D.C., on March 3, 1913, the day before Woodrow Wilson’s inauguration as president. Accompanied by nine bands and 26 floats, at least 5,000 marchers paraded down Pennsylvania Avenue, led by women from countries with the female vote, followed by U.S. state delegations, and wrapped up by a contingent of men (who faced taunts of “Where are your skirts?”). The march was instrumental in shifting the debate into a national issue, one that would need to be resolved by a constitutional amendment rather than state referenda. By the end of the previous year, the state-by-state approach had reached something of an impasse, and the referendum in Michigan, evidently stolen by anti-suffrage forces, only reinforced the need for a national strategy.

A contingent from the New York State Suffrage Association is profiled in this segment from Universal Animated Weekly, issue 50, released in late February 1913 and perhaps the earliest American newsreel issue to survive. Universal Pictures produced the longest-lasting newsreel, running under various titles from 1912 through 1967. From the start of U.S. newsreels in 1911, suffragette marches made for frequent stories.

Here we see the start on February 12 in Newark, New Jersey, of a 180-mile walk in winter by 14 New York “suffrage pilgrims,” who timed their arrival into Washington for the pre-inaugural march. The two most prominent leaders are given a joint close-up, although not identified. Standing alongside the wagon is 29-year-old Rosalie Jones, known as “General Jones.” If not strictly the “millionaire heiress” she was labeled in the press, she did fund rights activities, and she would go on to earn a doctorate in law. Here she holds her pilgrim’s staff and wears the brown cloak that was a current suffragette uniform. Sitting in the wagon is 35-year-old Elisabeth Freeman, who had been jailed for suffrage activities in Britain.

As evidenced by Freeman’s visible breath in the newsreel, the march south from Newark began on a bitterly cold day, with an afternoon high of 22 degrees. With swollen and freezing feet, the women stopped for the first night at Metuchen after 18 miles. But the rest of the march went faster than planned. Hundreds of supporters joined to march part of the way and the publicity was vast, with front-page stories in every city. Anti-suffrage forces staged a few counterprotests, and Baltimore’s Cardinal Gibbins used the arrival in his city “to say a few words of unstinted praise in behalf of…true women, women who know their place.” A Cleveland Plain Dealer cartoon on the day the New York marchers arrived in Washington was captioned “Gen. Rosalie Jones Crossing the Delaware” in a deft mix of satire and admiration.

The Washington march itself was far from the routine political pantomime that we now expect of such events. At the start the women had to fight their way through rough manhandling and “indecent epithets.” Still, outrage over such treatment of women only increased the publicity and sympathy for the cause. “CAPITAL MOBS MADE CONVERTS TO SUFFRAGE” was the New York Tribune headline. Congress held hearings with testimony from 150 witnesses, and the District of Columbia superintendent of police was forced to resign. It would be seven more years before the ratification of the Nineteenth Amendment, but the tide was turning.—Scott Simmon

About the Music
On to Washington is one of two films in Treasures III that feature a choral accompaniment. Here the song is “Give the Ballot to the Mothers.” Singers could easily have performed during the 1913 trek shown onscreen, for, as in so many other movements for political change, songs were a vital means of rallying the troops and spreading the message. Many pro-suffrage songs were familiar patriotic ones given new words, making them simple to sing and to remember but also reinforcing that women no less than men deserved credit for building the American nation. Thus, suffragists transformed Henry C. Work’s “Marching through Georgia” into “Give the Ballot to the Mothers,” and the song’s shouts of “Hurrah!” took on a new forward-looking meaning.

The new words were written by Rebecca N. Hazard, an influential suffragist from Missouri. She expertly fit her lyrics to Work’s exuberant tune, and in some cases they even seem an improvement. After the newsreel ends and the screen goes black, the quartet repeats the phrase quietly, a cappella, as if to suggest that the march goes on. If you listen carefully, you may hear the voices (and feet) echoing still.—Martin Marks