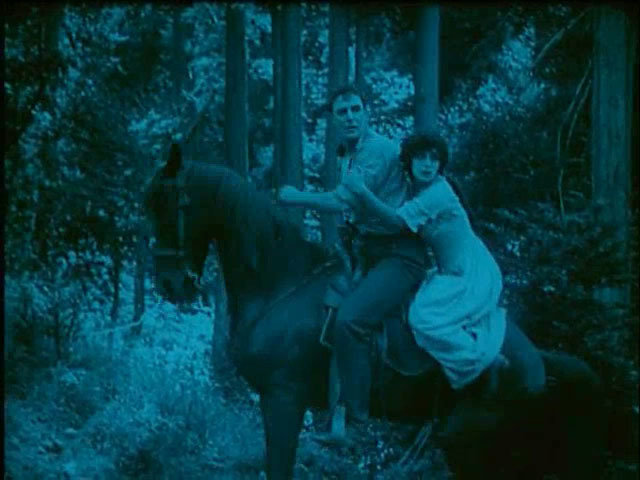 The visual beauty and directorial sophistication of Salomy Jane upend assumptions of what a first feature by an untried regional company ought to look like. In 1914, feature-length films were still novel, and the San Francisco boosters behind the formation of the California Motion Picture Corporation had not the slightest experience making movies. From such small companies formed that year in the West one expects the rough techniques of, say, the Los Angeles–based Oz Film Manufacturing Company or the San Antonio–based Buckhorn Film Company (see Ammunition Smuggling on the Mexican Border, also featured in Treasures 5: The West). Instead, Salomy Jane arguably surpasses the year’s best-remembered movies from mainstream studios.

Reviewers recognized something of this at the time, with admiration split between the film’s photographic splendor and its dramatic arc. Moving Picture World praised the “exceptionally fine photography” and also “the love story that becomes more and more interesting toward the close.” The Chicago Tribune labeled it “a picture of fire and beauty,” while Variety noticed that “The scenario is a model of clarity, despite its emphasis upon swift and frequent incident”—this at a time when writers were wrestling with longer film structure. The New York Dramatic Mirror summarized the film this way: “Unless nature betters her handiwork in the forests of California, it is difficult to see how producers are going to improve upon the scenic beauty of Salomy Jane…. Through a long cast, each character is made to stand out as a distinct personality…. Salomy Jane is in all ways a big Western drama, and soon audiences will draw their own conclusions about its most striking points. They may disagree on details but hardly on the essential fact—it’s a winner.”

That the film is forgotten is due primarily to all known complete prints and negatives from the California Motion Picture Corporation going up in flames in 1931 at its abandoned Marin County studio. A single projection print of Salomy Jane, found in Australia in 1996, was preserved by the Library of Congress and is seen here for the first time with its tinting colors re-created. (Tints appear only in the last three reels.) Happily, what survives is the original seven-reel version; it was cut down to as few as five in later screenings.

Like The Sergeant, this film promotes its locations in its full onscreen title: Salomy Jane, A Story of the Days of ’49, Produced in the Famous California Redwoods. In expanding Bret Harte’s 1898 story “Salomy Jane’s Kiss” into a four-act stageplay in 1907, Paul Armstrong borrowed characters from other Harte writings, filled in backstory hints, invented a vengeance subplot, and improved on the summary ending. Productions of the play were regularly praised for their ability to bring the outdoors in. “The wonderfully realistic sylvan…settings shared honors with the actors,” wrote a reviewer of one 1913 staging. The play was thus a natural for movie location shooting, and photographs from stage versions reveal that the film costumes were borrowed directly from them. The film acting too suggests how well a broadly theatrical style can work in early features, especially for the minor and comic types.

Although titled for its central character, Salomy Jane is a community story, set in the summer of 1852 in, appropriately, Hangtown (a California gold-mining settlement more welcomingly renamed Placerville in 1854). The film deftly interweaves older honor violence brought from the East (a feud from Kentucky and revenge for a wronged sister) with new Western threats (a stage robbery, quick-to-lynch vigilantes, and rivalries over Salomy as a rare young woman among the forty-niners). The film’s opening, somewhat confusing now, is taken up by a convention common only in the first couple years of feature-length films. Each major character is introduced through an emblematic moment, with all but Salomy’s taken from later in the film. Our introduction to such a large community expends half a reel.

Playing the title role is 24-year-old Beatriz Michelena in her first film. She’d been onstage since age 11, first alongside her father, a Venezuelan immigrant and opera tenor, and by age 17 she was promoted in lead soprano roles as “America’s Youngest Prima Donna.” In Salomy Jane, with a hairstyle evidently borrowed from Mary Pickford, she conveys the no-nonsense independence that soon made her America’s first Latina movie star.

Perfectly matched with her is British-born House Peters, the only cast member with experience in major features. His convincing presence as “the Man” (he reveals his name—Jack Dart—to Salomy in Harte’s story but not in the film) is reinforced by his return to Paramount-Lasky three months later to play essentially the same role in Cecil B. De Mille’s forty-niner film, The Girl of the Golden West (1915)—again as an outlaw secretly harbored by a tough Western woman. Playing the most smarmy of Salomy’s five suitors is William Nigh, who also codirected, the first of more than 100 features he directed. The film’s advanced look must be due partly to the company’s top-of-the-line equipment, including a $1,250 Bell & Howell camera that took two simultaneous negatives and was sometimes operated for this film (without credit) by 20-year-old Hal Mohr, later the winner of two Academy Awards.

The California Motion Picture Corporation had high ambitions to promote Northern California, especially through an arrangement to adapt several Harte works. It started out modestly enough with automobile ads for Michelena’s husband, George Middleton, and his Middleton Motor Car Company but by mid-1914 constructed a film lab and glass-enclosed studio as impressive as any at the time, in San Rafael, across the Golden Gate from San Francisco (and a few miles from where Lucasfilm’s Skywalker Ranch now stands). The company launched its Golden Gate Weekly newsreel (none of whose issues is known to survive) and then plunged into Salomy Jane. Locations for the feature were spread along the Bay Area coast—standing in for the Sierra foothills—as far north as the Russian River near Monte Rio (for the stunt leaps into the water and the final chase) and south to the San Lorenzo River near Santa Cruz (for the stage robbery). Closer to the studio was the Lagunitas Creek location for the final kiss under the arching tree, which frames Mount Tamalpais.

The gala October 8, 1914, premiere of Salomy Jane at San Francisco’s St. Francis Hotel led off with the Golden Gate Weekly, including a segment on Ishi, “the last wild Indian,” then living on the University of California’s San Francisco campus. In just two years, however, the California Motion Picture Corporation would be defunct, a victim primarily of the growing stranglehold on the distribution of features by vertically integrated production companies with theater chains. Salomy Jane survives to give vivid witness to the flourishing of the regional feature film in the years just before the conglomeration of Hollywood.—Scott Simmon