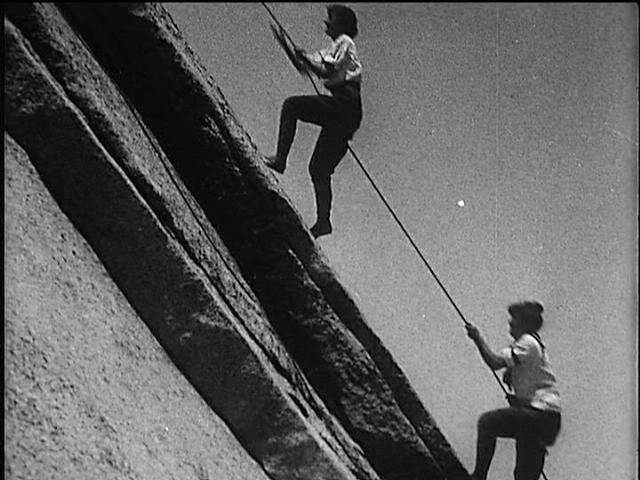 Crowds are already in evidence at the national parks in this 1916 Yosemite film. The last known original print of Seeing Yosemite with David A. Curry partly deteriorated before it was preserved. Our excerpts open with David A. Curry, the larger-than-life manager of Yosemite Valley’s Camp Curry and a legend for his booming voice, announcing the arrival of a motor bus loaded with happy campers. Camp Curry had been in operation since 1899 and offered canvas-walled cabins and meals in 1916 for about $3 a day, versus about $5 at the valley’s hotel. (As Curry Village, it still undercuts the hotels’ rates.) What might be thought of as crowds only really arrived in Yosemite after 1907, when a rail spur to within 10 miles of the valley replaced stagecoaches. Automobiles were permitted in 1913, and in 1916, the year of this film, the steep Tioga Pass Road from the east was opened to cars, and the new National Park Service issued its first “automobile guide maps.” We see an apparently endless line of enthusiastic hikers making the extremely strenuous climbs up Half Dome and 13,000-foot Mount Lyell, the park’s highest peak. (The Lyell Glacier they cross was twice the size it is today.) The valley saw about 40,000 visitors that year, and this film’s unique intertitles, with their texts ostensibly shouted by Curry, suggest that most of the visitors could hear his calls to meals. The Vallejo Daily Times reported that his “stentorian farewell follows you like the note of a foghorn down the valley,” and indeed variations on “farewell!” seem to be his repeated shout in the intertitles.—Scott Simmon