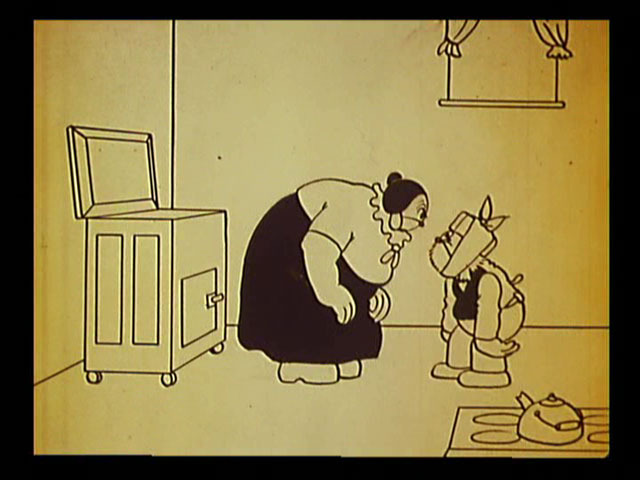 The title of this 1919 cartoon puns on the historical epic of four years previous, The Birth of a Nation. But its subject is tied precisely to its year and, indeed, to its release on June 29. Lobbying by the Anti-Saloon League had brought congressional enactment of an ostensibly temporary “wartime” national prohibition law, which came into effect on July 1, 1919. Hence the cartoon opens with flipping calendar pages: “June 30” with its drawing of a beer stein and “July 1” with its raspberry float. With the Eighteenth Amendment coming into force in January 1920, the prohibition era was effectively under way.

Badly affected by this ban is the dog-faced character Judge Alexander Rumhauser—Judge Rummy to his friends—who began life in a 1910 newspaper cartoon strip called Silk Hat Harry’s Divorce Suit, written and drawn by “Tad,” the pen acronym of Hearst sports columnist and cartoonist Thomas A. Dorgan. In The Breath of a Nation the judge is under the literally withering gaze of his wife, who proposes him as the “horrible example” for a temperance lecture called “The Horrors of Drink.”

The film was directed by twenty-seven-year-old Gregory La Cava, a former political cartoonist who had overseen all the animated cartoons at the International Films Service studio in New York ever since its founding in 1915. The Breath of a Nation’s gag-filled wit and full-body drawing style is due also to La Cava’s friend from his Art Institute of Chicago days, Grim Natwick, who animated the leggy bar girl and probably much else in the film. (In his long career, Natwick’s most memorable creation was Betty Boop.)

About the Music
The ensemble here consists of Mark Harvey, leader and trumpet; Peter Bloom, flute; Phil Scarf, saxophone; John Funkhouser, string bass; Harry Wellott, drums; and Tim Ray, piano. Harvey, who teaches jazz studies at MIT, is the founder, music director, and principal composer for the Aardvark Jazz Orchestra. He and the other musicians, also from Aardvark, improvised this score by doing what jazz musicians so often do—jam and have fun. They took as their point of departure a topical 1919 ditty by Carl Zerse, “I’ve Got the Prohibition Blues (for My Booze).”—Martin Marks