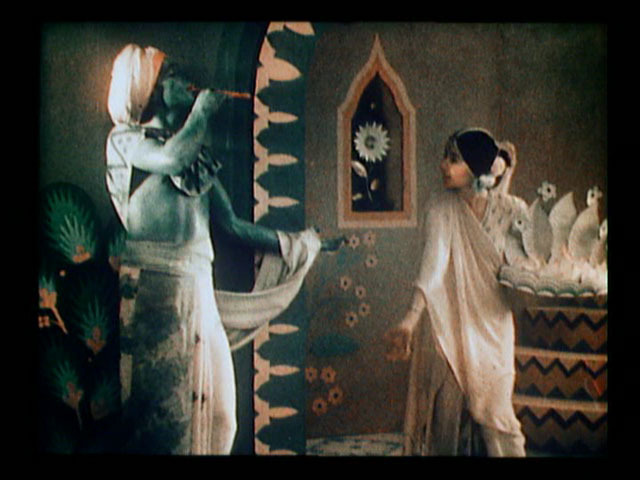 This film documents an early work by Martha Graham, the most innovative and influential American-born choreographer of modern dance. Immediately before her New York debut as an independent choreographer, Graham taught dance in the 1925–26 academic year at the Eastman School of Music at the University of Rochester, where this film was shot, probably in May 1926. George Eastman’s donations had led to the Eastman School’s foundation in 1921, and his connection helps explain how this film came to be produced in experimental color by Eastman Kodak.

To replicate the full visible spectrum on black-and-white film, three records (documenting red, green, and blue) are needed. In the silent era the most viable experiments employed complex optical engineering to capture two of the records (red and green), as seen here.

Throughout the 1925–26 year, Graham would arrange short dances for the Eastman Theater as parts of public programs that would integrate staged drama and end with a feature film. The May 9, 1926, Eastman Theater program announces the “first performance anywhere” of The Flute of Krishna. It is danced by five of her Eastman School students and draws from Hindu mythology. The god Krishna (literally “dark as a cloud,” and depicted in art with dark blue skin) was in his youth a cowherd whose flute music would tempt women to dance with him in the forests. Graham’s dance has Krishna (Robert Ross) calling four women, including his most devoted lover, Radha (Evelyn Sabin). In Indian devotional tales and lyric poetry, their love unifies the human with the divine. Graham’s choreography and content is still heavily influenced by the orientalism that pervaded her earlier years with the Denishawn company (and specifically by Ruth St. Denis’ Radha, 1906) but is finding its distinctive style through more rapid movements and Sabin’s collapsing into what became known as the “Graham fall” toward the end of the piece.

Graham had come to the Eastman School of Music at the invitation of twenty-eight-year-old Rouben Mamoulian, the head of the School of Drama, who collaborated with Graham on almost all of the Eastman Theater presentations that year. Mamoulian would leave Rochester in the summer of 1926 to begin his brilliant career as a director of Broadway theater and then of sound films. Graham also left that summer to take up a career in New York City.—Scott Simmon

About the Music
The score was created by George Ruckert, who studied with the renowned sarod master Ali Akbar Khan for many years and teaches world music at MIT. He was joined by flutist V.K. Raman and tabla player Nitin Mitta.

Ruckert offers these comments: “The amorous boy-god Krishna is the subject of many stories and dances in India. Krishna is metaphorically the bridegroom to us all, but symbolically wooer to the gopis, the cow-maidens of Vrindaban, who continually seek his attention. This vexes Radha, who is naturally jealous of these rivals. As in this vignette, Radha always triumphs. The music of Kathak is generally played by a stringed instrument and tabla (drums). More elaborate productions may feature other instrumentalists—in this case a flute, since Krishna is often depicted as the divine flute player whose music charms the maidens. The introduction to our score is without meter and played mostly by the flutist. The tabla and sarod enter with the gopis, and the music and rhythm of their first dance movement is traditional. After that, the flute accompanies Radha to the steady pulse of a sixteen-beat rhythm cycle on the tabla. The sarod freely interprets the movement of the gopis. At the end of the dance the flute sings expressive phrases, telling of the raptures of Radha united with Krishna.”—Martin Marks