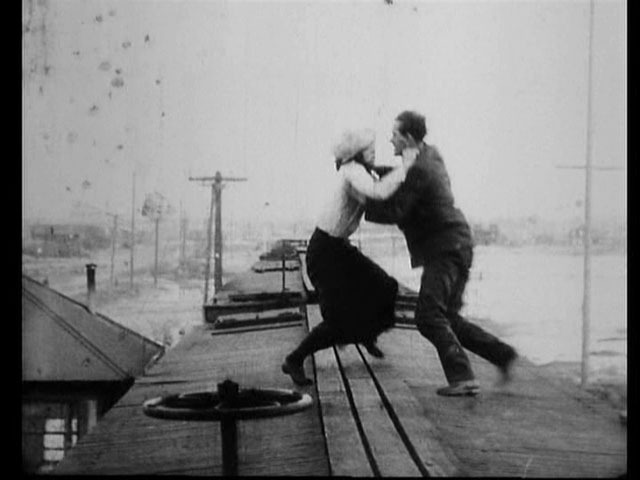 More than any other series the 119-episode Hazards of Helen (1914–17) was an adventure of the workplace, conveying a no nonsense feminism amid action stories about a woman’s capacity to do her job—and then some! It consisted of relatively self-contained episodes unified by Helen’s role as a railroad telegraph operator at a remote western depot, where she was usually the only woman in a man’s world. As if caught in some Sisyphean time warp, Helen began each episode with the men around her presuming that she was too weak and incompetent to do her job, and then proving herself the company’s fearless savior. A week later, she would take up her post again, all previous heroism forgotten.

In America women had worked as telegraph operators from the 1840s. In 1915, there were about 12,000 female telegraphers—about 20 percent of the total—but fewer than 3 percent of railroad operators were women. These served largely at remote locations not desired by male employees.

Helen is played by 22-year-old Helen Holmes. About the expectation to perform dangerous stunts, she said, “If we do not go ahead and do them, what would the pictures be like?” She also co-directed this episode and Moving Picture World added, “Miss Holmes is managing the company…. She writes scripts and does most of the work.” In a revealing parallel with the way that her character’s abilities were forgotten weekly, Helen Holmes’s production roles go unacknowledged in the credits.—Scott Simmon

About the Preservation
This episode of The Hazards of Helen was restored by the Library of Congress in 2006 from the two known surviving original prints, one found in Canada, the other in Britain. The Canadian copy was badly deteriorated at the end of the reel; the British copy showed most damage at the opening. Together they allowed for a virtually complete reconstruction.