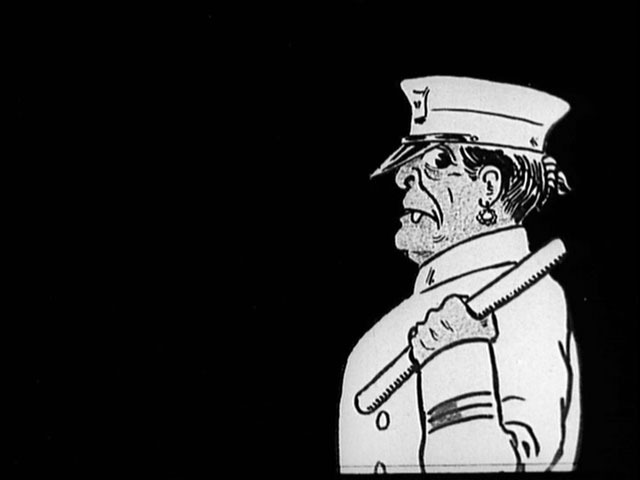 For a few years, beginning around 1909, the campaign for women’s voting rights seemed everywhere onscreen. In 1913, Writing the Photoplay told students who sought “political themes” that any “good suffragist story…would sell.” The film cycle waned by 1915, even though it wasn’t until 1920 that the Nineteenth Amendment gave women the vote nationwide. Perhaps as the movement gained support and women served on the World War I home front, suffragettes were no longer such an easy target for mocking comedy—the tone of almost all the suffrage films except for the few produced by women’s groups. Although the suffrage cycle is now almost entirely lost, we can sample it through this simple cartoon and the three titles that follow.

At the close of the nineteenth century, women had won full voting privileges in just four sparsely populated western states, and there would be no further progress for more than a decade. However, between 1910 and 1912, thanks to new leadership and more activist tactics by the women’s movement, five more states passed voting statutes. As documented in On to Washington, the 1913 newsreel story on this disc, suffragettes took to the streets—and provoked open backlash. The battlegrounds included newspaper editorial cartoons, the spirit of which was carried into such animated films as this one. The Strong Arm Squad of the Future originated within the early newsreel The Mutual Weekly and survives only as an undated fragment.

Suffragettes inspired two distinct types of caricature, both incorporated in The Strong Arm Squad of the Future. The “new” suffragette type, drawn as a lovely Gibson Girl, is only glimpsed in the film—the third in its little parade of six uniformed women—and she is statuesque enough here to have to step down into the frame. In newspaper cartoons such caricatures were seen, for instance, seducing rough frontiersmen into granting voting rights at the time of the 1911 California referendum. The other women in The Strong Arm Squad of the Future, however, are mannish and grotesque, especially the truncheon-wielding fifth woman with her odd wandering eyeball. That older caricature tradition paralleled attitudes still expressed, as in a 1912 Brooklyn Citizen editorial informing its readers that “the strong-minded and hard-featured woman, as most suffragettes are, repels the male.”

The uniforms worn by the cartoon’s parade of women might imply the benevolent charity of the Salvation Army, but in combination with the cartoon title, the uniforms turn more menacing. The phrase “strong-arm squads” had been applied in the press to “militant” British suffragettes who threw “meetings into disorder” and physically attacked government officials. The phrase also then referred to “strong-arm police squads” who themselves committed crimes in their official pursuit of criminals. This grim little cartoon comments on the present by foretelling a future under gender-inverted militias—which take power thanks to the punch line: “VOTES FOR WOMEN.”—Scott Simmon