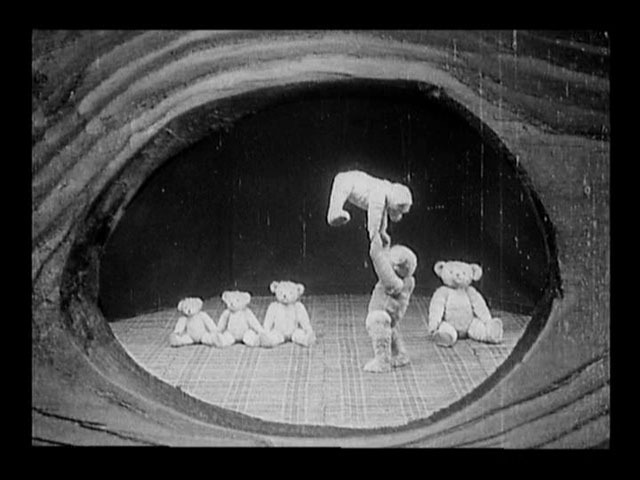 In a sense, this film asked its audience to provide its unity. Many early films relied for full comprehension on viewers’ knowledge of preexisting stories and popular fashions. But this one stretched the audience to the limit, asking for knowledge of the English fairy tale “Goldilocks and the Three Bears” and an the incident in President Theodore Roosevelt’s life as a hunter that led to the Teddy bear craze in the first place. According to the story, Roosevelt had gallantly refused to shoot a small wounded bear during a 1902 hunting trip. His “sportsmanship” led political cartoonists to draw “Teddy” Roosevelt alongside increasingly cute bear cubs, and toy stores began selling cuddly stuffed bears, with button eyes and movable joints, as Teddy bears.

The film begins by asking only for detailed memory of the fairy tale, as the Goldilocks character intrudes into the three bears’ home to find the too-hot, too-cold, and just-right bowls of porridge and the too-hard, too-soft, and just-right beds. In this film version, the three bears (played by costumed actors) have their own Teddy bears, and Goldilocks spies through a knothole upstairs a group of six stuffed bears, which perform synchronized acrobatics. The amusing animation in the minute-and-a-half shot shown here was photographed a frame at a time and took Edwin S. Porter a full week of eight-hour days, according to Moving Picture World’s believable report. The animation is made even more complex by being combined into the separately photographed “knothole.”

The care taken with that shot underlines how the whole production was more elaborate than all but a few films made during this period, when full reels would typically be turned out in a day or two. One exhibitor offered stuffed Teddy bears to “every lady attending” a special screening. After its theatrical run, the film was shown in a New York department store as a merchandising tie-in to further sales of Teddy bears.

In the film’s conclusion, provided by its satiric retelling of the story of Teddy Roosevelt and the spared bear cub, it is Goldilocks who saves Baby Bear by pushing away TR’s rifle after he has shot Mama Bear and Papa Bear. The deaths come as a shock after the domestic scenes. As a political satire, there may be more than a hint of manifest destiny hubris shown in the film’s closing shot back at the bears’ home, to which TR hauls his leashed captive and where he helps Goldilocks to plunder an overflowing armload of Teddy bears. Variety praised the “acrobatic antics” of the animation but not the conclusion: “Children will rebel against this portion. Considerable comedy is had through a chase in the snow, but the live bears seemed so domesticated that the deliberate murder…left a wrong taste of the picture as a whole.”—Scott Simmon

About the Music
The animation sequence is accompanied by a popular instrumental piece, from 1905: Die Parade der Zinnsoldaten (The parade of the tin soldiers) by Leon Jessel. It has often been used to accompany novelty acts, of which this sequence is certainly one.—Martin Marks