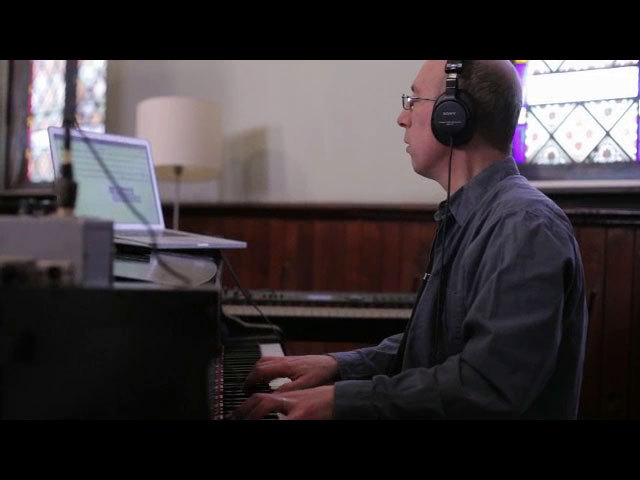 About the Score, by Donald Sosin

When I first read about the discovery of Upstream, I was instantly intrigued. Le Giornate del Cinema Muto, Italy’s famed festival of silent film, agreed to have me play for its European repremiere in October 2010. Our quartet (myself, along with violin, bass, and drums) jammed on half a dozen character themes I wrote for the occasion. At subsequent performances in Bologna, New York, San Francisco, and elsewhere in the United States, I added tunes and expanded the ensemble to a sextet. I wrote a new tune for witty lyrics by my wife, Joanna Seaton, that she sang during the opening titles and a few places in the film. Her performance accompanies the end credits on this DVD.

In our live performances we also incorporated a few standards—including George M. Cohan’s 1904 hit “Give My Regards to Broadway” and the 1911 “Oh, You Beautiful Doll,” by Seymour Brown and Nat D. Ayer—that we felt the characters would have known, and would be in keeping with John Ford’s practice of using tunes familiar to his audience. And of course “Auld Lang Syne,” whose lyrics are shown onscreen. When offered the chance to record Upstream for the NFPF, I spent many weeks watching the film and fleshing out the tunes and improvisations in a much more detailed way. We recorded in March 2013 in Henry Hirsch’s superb Waterfront Studio in Hudson, N.Y., with Peter Breiner overseeing the production. I played Steinway and Gaveau pianos and had three great musicians, Marshall Coid, Rob Jost, and Brook Martinez. We recorded the old-fashioned way, on analog tape, mixing down to two-channel stereo before converting everything to digital media. Joanna recorded her vocal in our home studio as she listened to the Waterfront backup tracks. I then edited everything on my MacBook and sent it to Chace Audio by Deluxe for mastering. We hope you will enjoy the results as much as we did creating the music for this lovely film, whose characters have become a welcome part of our family.