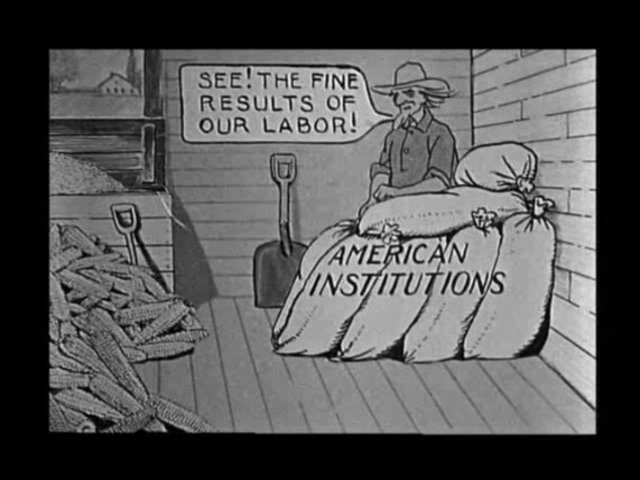 This savage little political cartoon reflects a capital-labor battle flaring out when it was made, probably in 1919 at the height of the first “Red Scare” in America.

A farmer Uncle Sam guards “THE FINE RESULTS OF OUR LABOR” from a rat labeled both “BOLSHEVIKI” and “I.W.W.” Such a link of the Industrial Workers of the World with revolutionaries was not entirely unfair. “It is the historic mission of the working class to do away with capitalism,” declared the IWW’s 1905 constitution, which foresaw labor strikes as leading the way to total social transformation. The IWW was a small union, never representing more than 5 percent of unionized workers, but it organized the less skilled, the lower paid, and immigrants ignored by other unions and found some successes during the 1910s in eastern textile mills and western logging camps, mining towns, and migrant farms. Known affectionately among its members as the Wobblies, the IWW was lampooned in the mainstream press as an acronym for “I Won’t Work,” “I Want Whiskey” or during the first World War, “Imperial Wilhelm’s Warriors.” The October 1917 Bolshevik revolution in Russia, which spread briefly to Hungary and Bavaria, helped feed a hysterical repression of the IWW in the United States, by western vigilantes and the federal government. The 1918 conviction under the new Espionage Act of more than 100 IWW leaders for “conspiracy” to hinder the wartime draft stripped the organization of its force, although it maintains a formal existence to this day.

The cartoon’s angle on all this is revealed by the signature at the end: “Animated by Ford.” The cartoon would originally have been seen as part of one or more of the many “educational” shorts produced at the time by the Ford Motor Company. The year after the war, 1919, saw the largest number of strikes in American history—involving 4 million workers or about 20 percent of the industrial labor force—and Henry Ford would have smelled a rat somewhere. “The labor union is a great scheme to interrupt work—it speeds up the loafing” was one of Ford’s gentler comments about unions, which he contrived to keep out of his plants until 1941. The corporate “Animated by Ford” signature also usurped credit from any of the cartoon’s individual animators, whose names remain unknown.

Because Henry Ford paid his autoworkers relatively high wages and was receptive to shortened hours, he considered himself the workingman’s partner and condemned “this habit we have of talking about ‘labor’ as if it was a class apart from the others, as if ‘labor’ and ‘business’ were two antagonistic opponents.” In this film, that’s just what they are.—Scott Simmon

About the Music
For this 40-second cartoon, Brian Robison created a musical war between two worlds of sound. On one side is farmer Uncle Sam, accompanied by the country fiddle tune “Turkey in the Straw” (originally published in the 1830s as “Zip Coon”); on the other side is a Bolshevik rat, accompanied by an offscreen chorus singing the socialist (later Soviet) anthem, the “Internationale.” But this is a one-man musical war: That is, all the music and sounds were performed, manufactured, and recorded by the composer himself.

It is worth going into some detail about how this music was created, to illustrate how intricate even a “simple” film score can be. Brian designed “Turkey in the Straw” as if it were being played by a country jug band of a jaw harp, spoons, two guitars, a “bass,” and a “mandolin.” The “bass” is really a guitar line that has been electronically lowered an octave. The “mandolin” is really a series of high four-note guitar chords that have been electronically duplicated, with one version detuned and delayed, to imitate the effect of paired strings. The chorus has three parts (two “sopranos” and one “alto”), but Brian actually sang each part three times and electronically raised them all an octave—thus creating a nine-voice choir or, in his words, a “virtual USSR: the Union of Soprano and Sopranino Rodents.” He turned the song’s Russian text into doggerel (“Vstavay, proklyat’yem zakleymyonniy” becomes “Stuff I poor class, exactly money”), and he backed up the rats with an “orchestra” of two kazoos and some prerecorded percussion. The shovel effect is a cowbell that has been electronically duplicated and transposed to create an augmented triad. Finally, with Uncle Sam’s line about Bolsheviks, we hear “a real live antique cymbal (no electronic fakery).” All clear? Hit it, boys!—Martin Marks