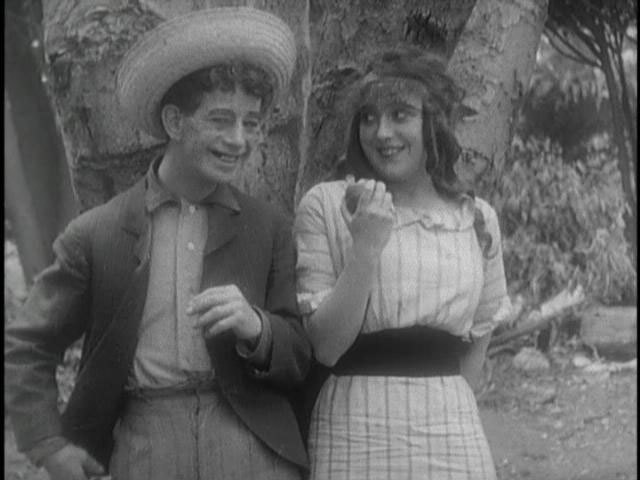 Won in a Cupboard, another stunning find in this New Zealand project, is the earliest-surviving film directed by Mabel Normand, the movies’ first great comedienne and woman comedy writer-director. Titled Won in a Closet at its release on January 22, 1914, it is the second directorial effort from the 21-year-old, who had already appeared as an actress in nearly 150 films. (Her first directed film, Mabel’s Stormy Love Affair, released two weeks earlier, remains lost, as is her third, Mabel’s Bear Escape, released a week later. Because most of her next films were probably co-directed, it’s not until Mabel’s Busy Day, released in June, that we have another of her solely directed films.)

Normand had worked her way through the two most commercially and artistically successful studios of the time. She had started at Vitagraph in 1910 and moved to Biograph in 1911, where she appeared initially in D.W. Griffith dramas but increasingly in comedies directed by Mack Sennett. When Sennett left Biograph in mid-1912 to found Keystone—a company that would channel its unrestrained spirit into comedy—Normand went with him and was in virtually all of the company’s early output. By December 1913, Keystone films—and Mabel herself—had become so popular that Sennett announced an expanded release schedule: at least three one-reelers and a two-reeler every month, from new production units, one under Normand’s direction. She made Won in a Closet over 12 days in December at Keystone’s studio in the northeastern suburb of Los Angeles then known as Edendale. The same month Charlie Chaplin would start his career in films there, with many of his first ones under her co‑direction.

Short comedies were, along with newsreels, the most numerous film type in the silent era. By 1913 virtually every movie program would have as part of the bill “the comedy”—and it was often more of a draw than the feature. Short comedies came in two lengths: one-reelers such as this one, running about 15 minutes, and two-reelers (such as Andy’s Stump Speech) running twice as long. Keystone’s one-reelers in particular were never strong on story lines, which tended to be something on which to hang action and gags.

Moving Picture World categorized Won in a Closet as “a nonsense number,” but its minimal narrative has become even more confusing than it would have been originally because footage is missing at the opening of this sole surviving print. (A new main title has been re‑created in the style of Keystone films of the period.) Essential to making sense of things is that we have two pairs of single parents and children. Mabel’s father is the local “constable” (played by Charles Inslee; the actor in the role is misidentified in some filmographies as Edgar Kennedy). He is smitten with the mother (Alice Davenport) of the boy Mabel imagines “her ideal” (Charles Avery, who often played a Keystone cop). The young couple’s romance is disrupted first by two rival “cut ups” (Hank Mann, who offers Mabel apples at creekside, and Rube Miller, with the goatee, who fails similarly with flowers) and then by misapprehension that a “tramp” is hiding in a closet at the mother’s home. In reality, the mother herself takes refuge in the closet to escape the constable’s attentions. After he joins her there, their fear of “scandal,” if they are found together, leads them to stay hidden. The kids call for help from neighbors and cops—and comic chaos builds….

One upside of Keystone’s reliance on physical comedy over intertitle language is that the company was unusually successful with worldwide audiences and distributed some two-thirds of its prints abroad—which helps explain why this print turned up in New Zealand. The film was titled Won in a Cupboard for the British Commonwealth market, probably to prevent an ambiguous or suggestive title. (Only in North America does “closet” mean primarily a wardrobe tall enough to enter. For the rest of the English-speaking world, a closet would also be a small, private room or—from “water closet”—a room with a toilet.)

When Normand made this film at the end of 1913, women directors were a rarity. There had been just two major figures over the previous two decades of U.S. filmmaking: Alice Guy Blaché and Lois Weber. Indeed, Won in a Cupboard seems to be the first surviving U.S. film directed by any woman other than those two. (Earlier in 1913 Grace Cunard began co-directing, with Francis Ford, and Jeanie Macpherson made one film, but those remain lost.) For all its “nonsense,” Won in a Cupboard has touches that show a singular cinematic talent in the making. Especially innovative is the way film-form exaggerations are used for comic effect: Split-screen panning shots merge when the two young lovers meet (“as if by magic,” reads the intertitle), and the rack focus in the previous two shots brings both lovers into amusingly dreamy close‑ups. Normand is doing something common enough now but entirely new then—becoming a Hollywood hyphenate, a woman actor-director (and writer too, although the writing credit for this film is uncertain).

The first film comediennes had played on their physicality. They were generally gangly and gaunt (such as John Bunny’s acting partner, Flora Finch, at Vitagraph) or large and heavyset (such as Marie Dressler at Keystone later in 1914). Roughhouse comedy from actresses also faced censorship—with elimination of “scenes of women bumping into men” among the demands from Chicago censors in 1914. Mabel Normand was the first female comedy star to find great success by linking a wild knockabout style to beauty and charm—and in that she’s the forerunner of every screwball comedienne. By June 1914, Photoplay readers voted her their favorite film star. In Won in a Cupboard the two sides of Mabel’s character—the charming and the roughhousing—are still split. Indeed, her slightly schizophrenic characterization divides the film at its midpoint. Relatively demure in the first half, she has eyes only for her ideal while shrugging off the two “cut ups.” But after she spots the tramp, she goes wild, loses her senses, and eggs on the antics and pratfalls of the bumbling neighbors as they manhandle the wooden closet in which father and mother are by then hopelessly trapped. Before she left Sennett in mid-1915, Normand would bring these sides into a more unified character. She would provide, as Photoplay put it that year, “the sugar on the Keystone grapefruit.”

About the Preservation
This early Mabel Normand film was preserved by the Library of Congress from a 35mm nitrate print received by the New Zealand Film archive from Jack Murtagh and Tony Osborne. The preservation work was completed by Colorlab Corp. with support from the NFPF.