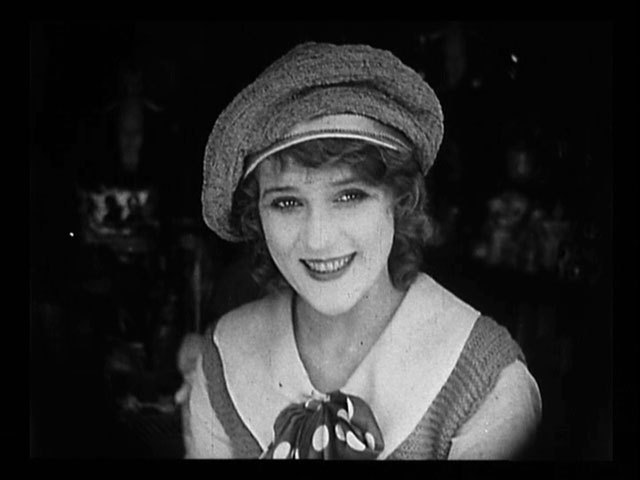 The World War I bond campaign on the home front benefited from a new discovery: the political muscle of movie stars, especially in fund-raising. The very notion of a “movie star” was itself only a few years old. Before 1912, it was rare for films even to credit actors, but by the time of America’s entry into the war five years later, the Hollywood star system was unstoppable.

By 1918, the biggest star of them all was Mary Pickford. 100% American is her contribution to the series of 35 one-reel shorts produced by all the major studios for release in September and October 1918 to promote the fourth of the Liberty Loan campaigns. The week after 100% American was released, its production company, Famous Players–Lasky, took out a full-page New York Times ad to reprint a letter of thanks from treasury secretary William Gibbs McAdoo, creator of Liberty Loans, under a banner trumpeting “The Silent Salesman of Liberty—motion pictures!”

In the eight years since her title role in Ramona (available on the NFPF’s Treasures III: Social Issues in American Film, 1900–1934), Mary Pickford had more than any other actor demonstrated the power of the movie star. When she started out with D.W. Griffith at the Biograph Company less than a year before Ramona, she had been his toughest-bargaining actor. She demanded and received $10 a day, with a $40-a-week guarantee—a salary Griffith asked her to keep secret lest others make similar demands. By 1918, at age 26, she was earning at least $30,000 a week at Famous Players– Lasky, with additional profits. At that rate, her donated time for 100% American was itself a significant war contribution. Readers of the new fan magazines would also have known that she had purchased several hundred thousand dollars of Liberty Bonds herself, and they could also read that she was expecting to pay close to $300,000 in supplemental “war revenue” taxes in 1918 alone.

Two of Pickford’s recent features had made World War I patriotism central to their plots: William Desmond Taylor’s Johanna Enlists (1918) and Cecil B. De Mille’s The Little American (1917). Pickford’s character in 100% American is also referred to as the “Little American,” and even in this simple propaganda short one can glimpse the charm that made her a star. “Mayme” is introduced as a “typical” and “thriftless” American, and her transformation is an argument not only for the purchase of Liberty Bonds but for self-sacrifice at home, to prevent rationing and reduce inflation. Initially Mayme laughs off an amusement-park speech, with its call for sacrifices, but it so troubles her conscience that she forgoes an ice-cream sundae and walks home to save a nickel toward “Liberty Bond Day.” (These dates were often declared state holidays; one couldn’t claim not to have time to participate.) Few Americans—and no war-era moviegoer—could miss hearing a speech like the one that gets to Mayme. Another of the home-front projects of George Creel’s federal Committee on Public Information was enlisting some 75,000 ordinary citizens as “Four-Minute Men,” who by Creel’s estimate gave more than 7 million patriotic speeches of about four minutes each from outlines provided by the committee. Many such speeches were given at movie theaters during reel changes.

In the live-action cartoon that concludes 100% American—when Mayme gets the amusement-park fun she skipped at the start of the film—the German emperor, Kaiser Wilhelm (so familiar a caricature that he didn’t need a label), attempts to walk the narrow retreat plank of the “HINDENBERG LINE” (the 100-mile German fortified trench) from “FRANCE” back to “GERMANY” (“WORLD DOMINION” has been scratched out) while weighed down with such baggage as “MILITARISM,” “ATROCITIES,” “BRUTE FORCE,” and the “CLOWN PRINCE” (his playboy son, Crown Prince Wilhelm III). Pickford’s Mayme knocks the Kaiser into the soup with an all-American baseball labeled “4th Liberty Loan.”

The story line itself ends with Mayme able to head off with her unexpectedly returned soldier to a “100% American dance,” open to military personnel and civilian buyers of Liberty Bonds. The term “100% American” had its ugly side, being used increasingly to cast suspicion on so-called hyphenated Americans, especially German Americans, and on any foreign influence on American life. Congress overrode President Wilson’s veto in 1917 to create the first English literacy test for would-be immigrants. In this “100% American” movement, one sees the end of the era when the country warmly welcomed newcomers. One 1917 poster read, “Are You 100% American? Prove It! Buy U.S. Government Bonds.”

There is thus a certain irony that Mary Pickford, known as “America’s Sweetheart,” was officially a resident alien—a Canadian citizen. Canada wasn’t ready to give up its claim on her, and when 100% American was shown there to help sell its own war bonds, the film was retitled 100% Canadian.—Scott Simmon

About the Music
100% American presents a winning heroine who takes control of the screen and sweetens the war message. For Mayme’s theme, who could resist “Sweet Sixteen” by George West? In his Film Folio No. 1: Moods and Motives for the Movies (Boston Music, 1920), West recommends playing the piece “for ingénue or pleasant scenic views.” Without question, Mayme is both. The theme greets her first close-up and returns in variations suggesting her changing thoughts and feelings. When Mayme and her friend visit the ice-cream parlor, for example, the theme gets a perky dotted rhythm to suggest their high spirits. This reworking of “Sweet Sixteen” is followed by a song with a similar rhythm, “You Made Me Love You (I Didn’t Want to Do It)” (words by Joe McCarthy, music by James V. Monaco; Broadway Music, 1913), a wry comment on Mayme’s guilty pleasure in sampling ice cream. Even Mayme has her weaknesses!

Anticipating the melodic structure of “Sweet Sixteen” and helping to tie together the score is “The March Past of the Corcoran Cadets” (Harry Coleman, 1890), a lively piece by John Philip Sousa. The march’s first strain begins the film, and its second and third strains, in heroic battle mode, accompany the fairground speech in which the “Four-Minute Man” urges the buying of war bonds.

The score is 100 percent American, with two exceptions: the English ballad “Keep the Home Fires Burning” (words by Lena Guilbert Ford, music by Ivor Novello, 1915), heard when Mayme gives up her dance ticket, and the German song “Watch on the Rhine.” In the final fantasy sequence the German patriotic anthem does battle with that most American of songs, “Take Me Out to the Ballgame” (words by Arthur J. Lamb, music by Albert Von Tilzer; York Music, 1908). The American classic triumphs when Mayme “strikes out” the Kaiser and knocks him off his perch. The last word, however, must go to George M. Cohan’s “Over There” (William Jerome, 1917). Since the rousing World War I favorite is played complete in Bud’s Recruit (also showing now in the Screening Room), I felt it sufficient simply to quote the last line: “And we won’t come back till it’s over, over there!” With Mayme singing these words, we’d all buy war bonds!—Martin Marks

About the Preservation
100% American was donated by Mary Pickford to the Library of Congress, which struck a 35mm print.

About the Archive
The Library of Congress, the world’s largest library, is the research arm of the United States Congress. Founded in 1800, the Library mapped its course as a premier research institution with the purchase of Thomas Jefferson’s personal library. The collections include more than 29 million books and countless manuscripts, photographs, films, videos, sound recordings, and other materials. The Library is open to the public and welcomes researchers.

The Library’s motion picture holdings began in 1893 when Thomas Edison deposited paper copies of his early kinetoscope loops for copyright protection. Today the Motion Picture, Broadcasting, and Recorded Sound Division is home to a vast collection of films and television programs. The Library also runs its own film, video, and sound preservation laboratories in the recently opened Packard Campus for Audio Visual Conservation in Culpeper, Virginia.

About the Commentator
Kristen Whissel is Associate Professor of Film & Media at the University of California, Berkeley. She is the author of Picturing American Modernity: Traffic, Technology and the Silent Cinema (Duke University Press, 2008) and has published articles on early American film in Camera Obscura, Screen, and The Historical Journal of Film, Radio and Television. Current projects include a book titled Digital Effects Cinema.