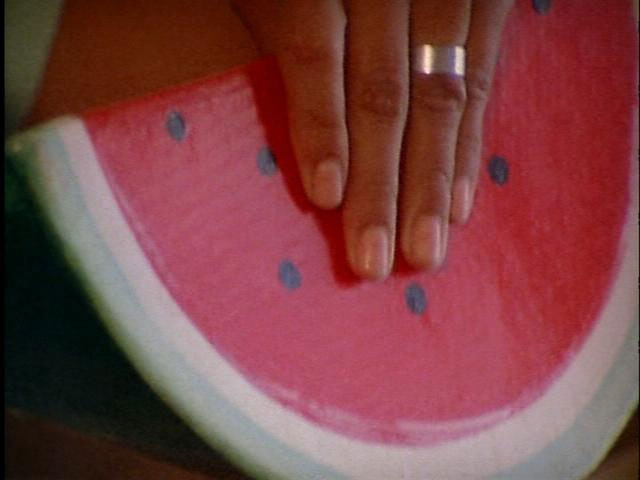 Chick Strand (1931–2011) brings an ethnographer’s eye to avant-garde filmmaking. A native Californian, she became interested in other cultures as a child. While studying anthropology at the University of California at Berkeley, she helped Bruce Baillie launch Canyon Cinema and grew fascinated with experimental film. Strand enrolled in UCLA’s Ethnographic Film Program, learning optical printing from Pat O’Neill and doing anthropological fieldwork in Mexico. The program encouraged experimentation. In Anselmo (1967) and early films completed while still a student, Strand wrestled free of the documentary objectivity of social scientist filmmakers and presented a fuller, more expressive characterization of her subjects. “To leave out the spirit of the people presents a thin tapestry of the culture,” Strand wrote in 1978. “I want to know really what it is like to be a breathing, talking, moving, emotional, relating individual in the society.”

Strand completed her graduate work in 1971 and joined the faculty at Occidental College, where she taught for 24 years. For three decades, she summered in Mexico with her husband, artist Neon Park, and documented the lives of everyday people met along the way. “I’d be tripping over the rocks and speaking this terrible Spanish,” Strand told the L.A. Weekly’s Holly Willis in 2006. “But I was so incredibly interested, and people really responded.”

Fake Fruit Factory, shot from 1981 to 1985 and completed a year later, emerged from these travels. While the title may suggest an industrial film tracing an assembly line process to market, the documentary is less interested in products than in the people who make them—the young Mexican women who create decorative papier-mâché fruit and vegetables for a small handicraft facility. The story is told almost entirely through close-ups. The women do things—knead plaster, tear paper, apply paint, hang ornaments to dry, prepare food, care for children, count bills. As they work, they gossip and complain about men. The camera follows their faces and hands and the things that they produce. The gringo boss and his cousin, seen largely through glimpses of their faces, look on.

Midway the film leaves the factory for a picnic and swim. The women make a holiday of the excursion, bringing food and children and savoring the pool. For the men, it is yet another chance to flirt with employees. Unfazed, the women return, ready their wares for market, and receive their pay. In the closing text titles, we learn that two weeks later the factory owner ran off with a blackjack dealer and that his Mexican wife took over and became rich. While the bosses may change, the women live on in Strand’s intimate portrait of work.

About the Preservation
With support from the NFPF’s Treasures from American Film Archives project, a collaboration funded by the National Endowment for the Arts, the Pacific Film Archive preserved Fake Fruit Factory. The preservationists worked from the filmmaker’s original materials.

More Information
Interviews with Chick Strand are included in Scott MacDonald’s Canyon Cinema: The Life and Times of an Independent Film Distributor (University of California Press, 2008). Strand’s “Notes on Ethnographic Film” appears in Wide Angle 2, no. 2 (Spring 1978). An interview with the filmmaker by Kate Haug is featured in Wide Angle 21, no.1 (January 1998). Also of interest is “Chick Strand’s Experimental Ethnography,” by Maria Pramaggiore, in Women’s Experimental Cinema: Critical Frameworks (Duke University Press, 2007), edited by Robin Blaetz. Prints of Strand’s films are available from Canyon Cinema and the Film-Makers' Cooperative.

About the Archive
For more than 35 years, the Pacific Film Archive has been a center for the study and appreciation of the moving image. The PFA presents more than 450 film and video programs annually, reflecting the full spectrum and cultural diversity of world cinema, past and present, and providing access to rare works not otherwise available to the public. Its exhibition program, film and video collection, and library and film study center provide an array of interconnected services, making the PFA an invaluable educational institution for anyone interested in the study of cinema. Its film collection is distinguished by its holdings in Japanese cinema, Soviet silent film, and West Coast independent film, especially Bay Area avant-garde film and video art.