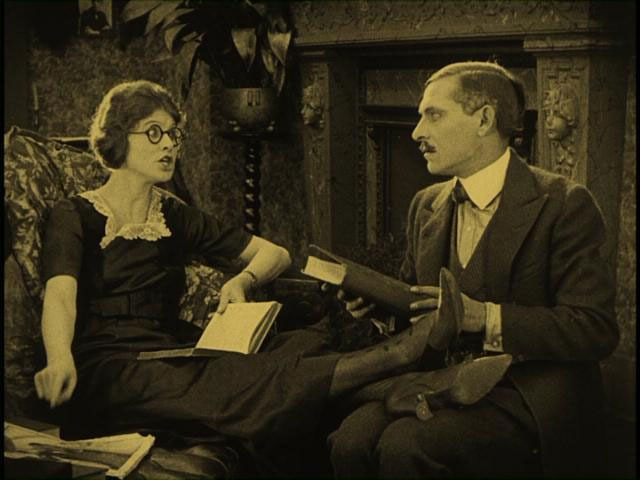 Released under the Christie’s “Vanity Comedies” banner, A Bashful Bigamist is precisely the type of film that company founder Al Christie believed proved his point that comedy could teach moral lessons. “No one need look down upon comedy,” he wrote in a 1920 pamphlet about the subject. “Some of the most useful lessons may be taught through satire…Some of the most rollicking and mirth-producing screen productions send the audience away with lessons that have been subconsciously absorbed, but that are lasting and productive of much real good.”

A Bashful Bigamist follows the comic complications that develop when Betty resorts to a white lie to keep her new husband closer to home. Following the advice of her girl friend, who has whipped an errant spouse into a docile helpmate, she spins a tale of a late-lamented first husband who exemplified all that was ideal in a man. To buttress her story, she passes off a portrait of Uncle Oswald, who she thought was abroad, as her dearly departed. Things spiral out of control, when the “deceased husband” (played by the fabulously expressive Eddie Barry) drops by for a visit.

In the 1920s Christie Comedies often used stick figures drawn by Norman Z. McLeod in their intertitles. Like a silent-film version of a Greek chorus, the figures commented the action and helped bring home the moral lesson. McLeod went on to make his name directing the Marx brothers and worked again with scenarist Jack Jevne on the hugely successful comedy, Topper (1937).

About the Preservation
A Bashful Bigamist was preserved under the direction of the Museum of Modern Art from a 35mm tinted nitrate print found in the collection of the New Zealand Film Archive in 2010. The work was funded through the support of a Save America’s Treasures Grant secured by the NFPF. The main and end titles were missing from the source material and were recreated in the style of other Christie films of the period.