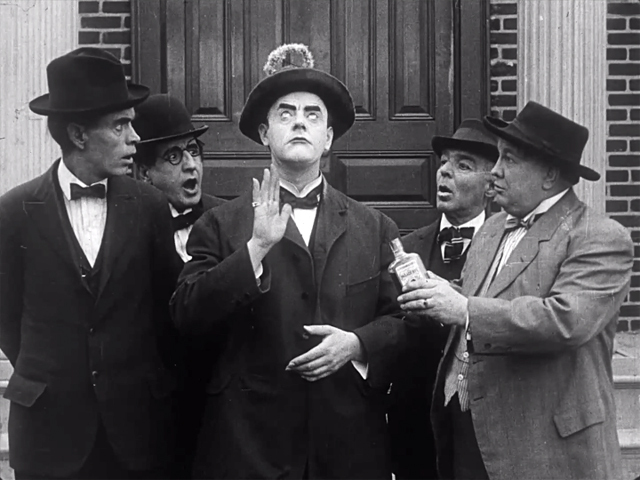 Harry Myers is remembered today for playing the drunken millionaire in Charlie Chaplin’s City Lights (1931), but few know that he was something of a Chaplin himself in the teens, when he produced, directed, wrote, and starred in a series of sophisticated domestic comedies with his screen partner Rosemary Theby. He even designed some of the sets.

After making his stage debut in 1900, Myers spent 10 years on the road in stock companies before entering films with the Lubin Company. At first he was put to work as a handsome dramatic leading man, but he soon gravitated to comedies. At Lubin he met Theby, who had started her career at Vitagraph and had recently been a leading ingénue for the Reliance Film Company. The pair became a team in 1914, with Myers directing their shorts, and by 1915 they’d fine-tuned their output to clever, situational examinations of male-female relationships, usually marital, or as an exhibitor ad advised:

“Refined comedy of a high order — The Myers-Theby Comedies. The humorous adventures of a newlywed couple are shown in each release. All who intend to be, are, have been or don’t want to be married, will enjoy them.”

After getting started at Lubin, the couple moved around quite a bit; their first stop was the Victor Film Company. The company had been formed in 1912 by star Florence Lawrence and her husband Harry Salter, and had become part of Universal Pictures’ umbrella of brands. A Model Husband was made for Victor and was shot at Universal’s facility in Fort Lee, New Jersey, which gives the film a different look from that of the regular Hollywood-made comedies. East Coast actors were used, and the standout performer is Nora Cecil, who plays the snooty Mrs. Gossip. Cecil was an Irish-born actor who specialized in gossips, girls’ school matrons, and mean landladies. Around the time that A Model Husband was made she also appeared in Mary Pickford’s Poor Little Rich Girl (1917) and Tillie Wakes Up (1917), with Marie Dressler, and she continued her cinematic reign of terror well into the sound era with films like Stagecoach (1939) and I Married a Witch (1942).

Myers and Theby stayed at Victor for a year and a half before switching their popular series to the Vim Film Corporation in Jacksonville, Florida. When Vim closed in early 1917 they took over the studio facilities for their own Myers-Theby Productions, which were distributed by Pathe. A team in the minds of their public, they appear to have been a couple off-screen, too, but didn’t marry until the latter 1920s, as Myers had a wife and children in Philadelphia.

By 1918 they dissolved their formal partnership, and each moved into starring roles in features, although they memorably reteamed for the 1921 film version of Mark Twain’s A Connecticut Yankee in King Arthur’s Court. Having stopped directing and writing, Myers became a busy character comedian with plum roles in The Marriage Circle (1924), Zander the Great (1925), Exit Smiling (1926), and The Girl in the Pullman (1927), while Theby’s films included Kismet (1920) and So Big (1924).

By the end of the decade their careers had waned, and after his last hurrah opposite Chaplin in City Lights, Myers descended to walk-ons in sound films until his death in 1938. Theby took small roles in features and shorts; her best-known later role was as Ma Snavely in W.C. Fields’ The Fatal Glass of Beer (1933). She was working as an extra at the time of Myers’ death and left Hollywood after remarrying. She died in 1973.

About the Preservation
A Model Husband was preserved in 2015 at Colorlab Corp using a 35mm nitrate print from EYE Filmmuseum. The intertitles were translated from the Dutch and are modern recreations. The work was supervised by the Library of Congress with funding provided by the National Film Preservation Foundation.