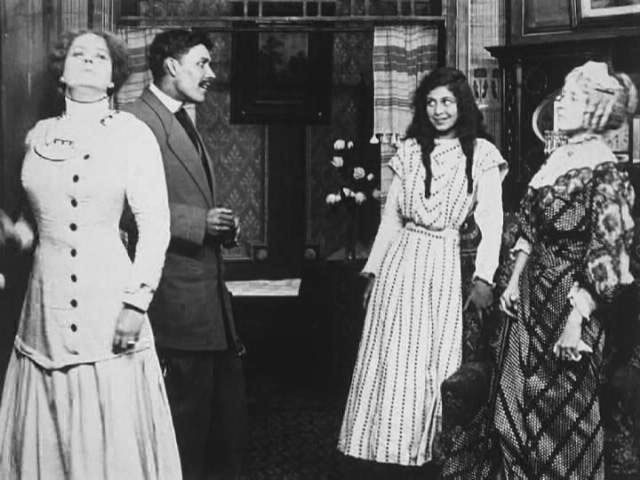 This 20th-century retelling of the classic fairy tale keeps all the familiar elements — a selfish step-sister, a put-upon beauty, a Prince Charming, and, of course, a lost slipper — but shifts the action to a contemporary boarding house. Cinderella, played by Mary Fuller, befriends an elderly resident, who buys a party outfit for her favorite when Cinderella’s elder sister preens for a dance. The new clothes transform the unassuming maiden into the toast of the ball. Finding Cinderella’s missing shoe, a dashing young man follows the clue to his grandmother, Cinderella’s friend at the boarding house, who works her magic to reunite the couple.

A Modern Cinderella, one of Fuller’s final films for Vitagraph, was shot just before the star’s move to the Edison Manufacturing Company. There she remade the ever-popular Cinderella story the following year under the same title and found fame as the first heroine of U.S. serials What Happened to Mary? (1912), Who Will Marry Mary? (1913) and The Active Life of Dolly of the Dailies (1914). (Click HERE to see her as unstoppable reporter Dolly Desmond in episode 5, “The Chinese Fan”, also preserved through the New Zealand Project.)

In 1910 the Vitagraph Company released three to four titles each week from its studios in Flatbush and was considered by many in that year to be the leading company artistically, superior even to the Manhattan-based Biograph Company. But the survival rate of Biograph's films is so much higher—thanks to the rescue of its negatives by the Museum of Modern Art—that it has eclipsed its rival in popular memory. Just three months after the release of A Modern Cinderella, a massive fire swept through the Vitagraph facility, destroying the negatives of virtually every film made up until that point. It is only through distribution prints such as this lovely tinted example from the New Zealand Film Archive that the studio’s early works can be studied today.

About the Preservation
This film was preserved in 2012 under the direction of the Academy Film Archive from a nitrate print discovered in 2010 at the New Zealand Film Archive. With support from the Save America's Treasures project, undertaken by the NFPF in 2011, the 35mm tinted print was scanned at a high resolution and output to 35mm polyester film stock at Colorlab.