A Trip through the Lassen Volcanic National Park (1918) 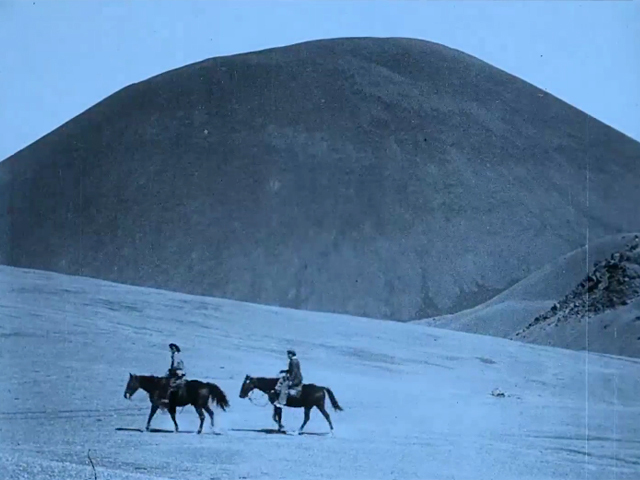 These days, Lassen Peak sleeps. Standing on the crater rim, you’ll be hard-pressed to think of the summit as a fiery place. In fact, you’ll likely be cold. The airy heights, more than 10,400 feet above sea level, are whipped by chilly winds even in summer, and most years a snowfield blankets the pit of the main crater.

But in the early twentieth century Lassen was the only—and thus the premier—erupting volcano in the United States. From 1914 to 1917, the plug dome belched steam, jettisoned ash, and on two occasions blew with such ferocity that entire landscapes were reconfigured, a nation was transfixed, and a fledgling national parks system rushed to protect its beauty and volatility for posterity.

The mountain’s explosive history is front and center in Lassen Volcanic National Park, where displays of photographs by B. F. Loomis and others document the drama of major eruptions in 1914–15. It’s also front and center in A Trip through the Lassen Volcanic National Park. The centerpiece of this short film is footage of Lassen in action, as novel now as it was at the time of its release in 1918. With these images, cinematographer J. J. Hammer of Red Bluff, California, created what one expert determined “might be the second oldest existing film of an erupting volcano” as well as “one of the first in a long line of volcanic films that capture the majesty and awe-inspiring views of an eruption.”

What’s also amazing about what Hammer and colleague H. A. Phillips created is not only how much has changed in the park in the century since the footage was shot, but how much remains the same. When the intrepid filmmakers forayed into the backcountry of what was then a brand-new national park—Lassen was established in 1916, the same year the National Park Service was formed—the amenities familiar to modern visitors did not exist. Bumpass Hell appears without boardwalks, an expanse of boiling pools and steam vents and moonscape foreign and spell-binding. In Devils Kitchen, the steep talus slope of an eroded crater spills into a secluded pocket of hydrothermal activity, with sulfuric steams issuing from fumeroles and thumping “paint pots.” Again, no boardwalks, no trail signs. Lake Tartarus (now Boiling Springs Lake) remains an enigma, its complicated chemistry the focus of ongoing research into the dynamics that drive Lassen’s hydrothermal fields. Formal pathways have long since been beaten into the cinder fields, but what you see on film at Cinder Cone is essentially what you get today—the volcanic bombs; the beachhead on Snag Lake; the ragged lava beds. Bonus points: A trail leads down into the Cinder Cone’s crater. If you are curious . . .

Because A Trip through the Lassen Volcanic National Park reflects the knowledge of its day, some of the intertitles contain errors. But these provide an opportunity to reflect on how science continues to reshape our understanding of the world. For example, Lassen Peak is now considered the southernmost volcano in the Cascades and not part of the Sierra Nevada per se, though it rises at the northernmost reach of that range, as well as at the westernmost edge of the Great Basin. Cinder Cone was born of an eruptive cycle dating back to the seventeenth century—a cycle that also created the Painted Dunes and Fantastic Lava Beds and significantly predates the most recent Lassen Peak eruptions. Snag Lake, identified as the “great lake formed by the 1915 eruption” was actually dammed centuries earlier. That said, the filmmakers can’t be faulted for not knowing Cinder Cone’s geologic time frames, given that controversy surrounded its origins up until the 1980s, when the eruption of Mount St. Helens focused new attention on the forces shaping all Cascade volcanoes.

The film’s centerpiece, of course, is Lassen in action. In 1914–15, when the volcano was fully involved, curious men were wont to wander around on the summit slopes carrying cameras and scientific equipment. Sometimes they were greeted by a crater puffing steam; sometimes Vulcan vented hot rocks and gas at them, forcing them to run for their lives. No one died, but one story describes a man knocked out cold and left for dead after he was struck by rocks hurled downslope at him and a companion. In the biggest eruption of the cycle, on May 22, 1915, the volcano ejected huge volumes of hot gas and ash, creating dramatic volcanic phenomena known as lahars (mudflows) and pyroclastic flows. The ash plume rose 30,000 feet into the atmosphere, and fallout dropped as far away as Winnemucca, Nevada. In the Hat Creek and Lost Creek drainages, the flows took out everything—streambeds, woodlands, homesteads—for miles.

That major eruption is not captured in this footage; instead, it shows what is thought to be a lesser eruption that occurred sometime before 1917. Released by Hammer as Mt. Lassen Volcano—America’s Greatest Scenic Wonder, the film was a local sensation before it gained national attention, and eventually movies depicting Lassen’s eruptive displays were shown in theaters across the country. An article from the June 1918 Oregon Daily Journal raved about a film titled Mount Lassen in Action, noting Hammer’s images of Lassen’s “billowy vapors, black furnace emanations, eruptive energy and all [are] a wonderful sight that will make patron of the ‘silent drama’ clap their hands and shout ‘bravo!’”

By 1918, when the film was released, Lassen’s eruptive cycle had all but ended. In that year, the Oakland Tribune lamented that “the old mountain cannot be counted upon as a constant, regular, every-day performer” for sightseers, being “decidedly temperamental in this respect, staging little eruptions apparently only when fancy strikes it.” By the early 1920s Lassen was completely at rest. Today, Hammer’s film, along with the still photographs captured by Loomis and others, constitute a remarkable and thrilling visual record of an earth-shattering event, both for park lovers and film aficionados.

About the Preservation
A Trip through the Lassen Volcanic National Park was preserved in 2015 at Colorlab Corp using the only known surviving element: a tinted 35mm nitrate print from EYE Filmmuseum. The intertitles were translated from the Dutch and are modern recreations. The work was supervised by the Academy Film Archive and funded through a National Endowment for the Humanities grant secured by the NFPF.

About the Music
The new music for this presentation was composed and performed by Michael D. Mortilla. Michael has been composing professionally for more than four decades and has accompanied silent film screenings throughout the United States. Among his many NFPF projects are the accompaniments for the DVDs Treasures 5: The West and Lost and Found: American Treasures from the New Zealand Film Archive. The score for A Trip through the Lassen Volcanic National Park was improvised in one continuous “take” in order to recreate the live experience of an audience at the time of the film’s original release. According to Michael, “the creative process involves running through the film repeatedly, recording most of the performances. A typical piano solo for a one-reeler like this usually requires about 14 takes to arrive at the final musical work. There is little to no editing of my performances, and absolutely no editing of the score’s overall structure.”