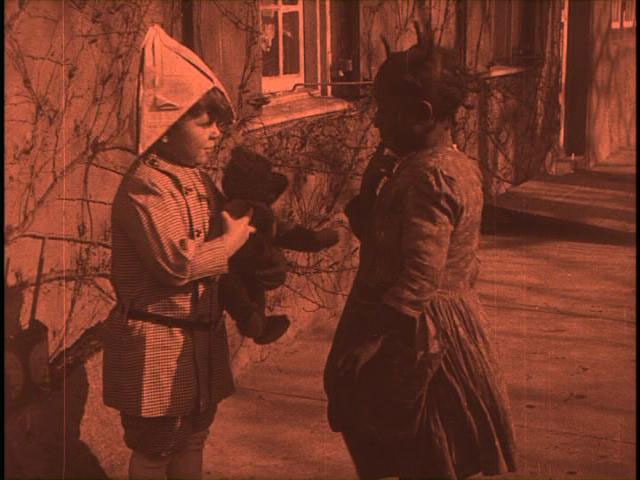 Released in April 1914 shortly before Easter, An Easter “Lily” was marketed as a holiday-themed “comedy-drama that will be enjoyed by young and old.” And what could be better family entertainment than a movie with Vitagraph’s five-year-old child star Bobby Connelly?

Born to vaudeville performers, Connelly had already cut his teeth at the Kalem Company before he followed his sister Helen to the New York-based Vitagraph Company, which shot films closer to their home. At the new studio, he became the centerpiece of the Sonny Jim comedies, a series of 20 shorts about the complexities and pleasures of bringing up a kid in an upper-middle class family. Endearingly mischievous, brave, and too young to be cowed by societal norms, Sonny Jim was everything America loved in a boy. In most episodes Sonny Jim’s shenanigans lead to trouble before he learns life lessons from Daddy Jim and Mother Dear (as they do from him).

The third in the series, An Easter "Lily" takes on upstairs/downstairs race relations with childhood candor. Following his family’s African American maid to the laundry, Sonny Jim befriends her daughter Lily and shares his teddy bear. With Easter approaching, Mother Dear buys her boy a new outfit and readies her home for relatives. Sonny Jim talks about the coming festivities with his playmate. When he learns that she does not have holiday clothes, he appropriates the white frock of his visiting cousin and invites Lily to join his family for Sunday worship. Sonny Jim prepares to escort his newly bedecked, but hesitant, friend into church just as the film breaks off. While the ending unfortunately does not survive, we know what happens from the plot summary in Motion Picture World: “To the huge amusement of all, he (Sonny Jim) drags her (Lily) up the aisle into Daddy Jim’s pew. Daddy later asks Sonny why he did it, and he replies ‘Cause nobody ‘membered Lily at all.’ Sonny is forgiven.” The film closes with the family presenting Lily with a new gingham dress.

The series ended in 1915 but its popularity continued in a novel published that year, with illustrations taken from the movies. Connelly made more than 80 films in his short career, including Humoresque, (1920), directed by Frank Borzage, before dying of bronchitis at the age of 13.

Thanks to Leah Weinberg, a graduate student of Caryl Flinn at the University of Michigan, for her informative paper about the film.

About the Preservation
This film was preserved by the Library of Congress from an original nitrate release print discovered at the New Zealand Film Archive in 2010. The work was funded through the support of a Save America’s Treasures Grant secured by the NFPF. Extreme nitrate decomposition bedeviled some of the print and preservationists exercised extreme care to save as much of the image as possible.