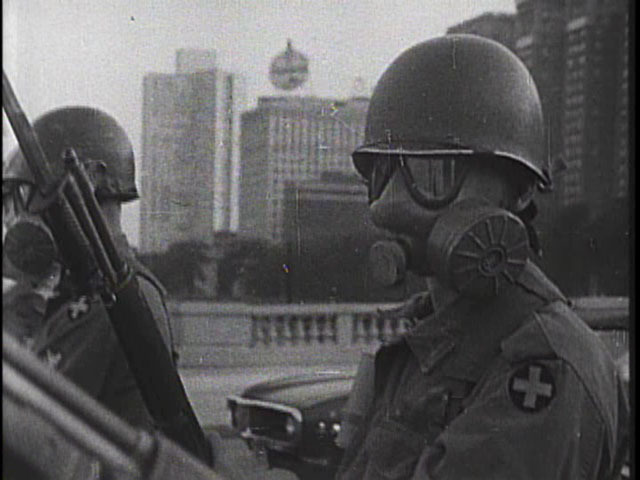 The Film Group, a Chicago-based production company set up to create industrial films and ads, found a new purpose during the Chicago Democratic Convention in late August 1968. On a lunch break from shooting a Kentucky Fried Chicken commercial, founding member Mike Gray and his crew were shocked by police violence on the very streets where they lived and worked. Radicalized, they filmed the chaos and created their feature-length documentary American Revolution 2. From their footage grew the educational series, The Urban Crisis and the New Militants.

Produced by the Film Group’s accountant Bill Cottle, the series consists of seven self-contained modules that “teach by raising questions rather than by attempting to answer them.” The modules tell their story through editing rather than voice-over narration and show “real events, with real people acting spontaneously,” as the Group explained to an educational film distributor. In Social Confrontation, the filmmakers juxtapose events inside the convention hall with those on the streets, connecting the brutality of police with the oppressive tactics of the Democratic leaders.

The 1968 convention brought together a Democratic Party enraged and dispirited by the assassinations of Martin Luther King and Robert Kennedy just a few months before and torn by opposition to the Vietnam War. President Johnson had refused to seek reelection and many saw front runner Vice President Hubert Humphrey as little better. Antiwar and civil rights protesters converged on Chicago but the police and National Guards had little patience with their demonstrations. On August 28, in part of what the Walker Report to the National Commission on the Causes and Prevention of Violence called a “police riot,” authorities clubbed protesters and released tear gas so intense that it permeated the convention hotel. The ensuing mayhem came to be known as “The Battle of Michigan Avenue.”

Social Confrontation captured the havoc firsthand. While convention-goers debated the Vietnam plank, protestors filled Grant Park for a rally. In a series of escalating confrontations documented by the film, police released tear gas, National Guards surrounded the park, and protesters escaped onto Michigan Avenue, mingling with the covered wagons of the Poor People’s March led by Reverend Ralph Abernathy. A stand-off ensued in front of the Conrad Hilton Hotel, headquarters of the major convention-goers. Receiving an order to clear the streets, the police charged into the 5,000-strong crowd, beating anyone in their path—protestors, reporters and bystanders—and dragging them into police wagons.

The delegates in the convention hall gradually received reports of the melee. When Wisconsin delegate Donald Peterson noted that thousands of young people were being beaten in the streets and proposed moving the convention he was cut off mid-sentence by Convention Chair Carl Albert. The film cuts to bloodied protesters before returning to the convention, shock gripping the hall as Senator Abraham Ribicoff went off script to exclaim “When George McGovern is president of the United States we wouldn’t have to have Gestapo tactics in the streets of Chicago!” The Mayor of Chicago, Richard Daley (father of the current mayor), shouted back in protest, leading Ribicoff to add, “How hard it is to accept the truth!” By the convention’s end 668 people had been arrested and a thousand more treated by medics. Hope, however, still lived on at the candlelight vigil concluding the film.

To counter the images in the news, Chicago commissioned the film What Trees Do They Plant? (1968), titled after one of the mayor’s rejoinders. But the violence documented by national television and films like Social Confrontation had been seared into the public consciousness. The truth proved hard, but not impossible to accept.

About the Preservation
Thanks to release prints of The Urban Crisis and the New Militants donated by Bill Cottle and Mike Gray and grants from the NFPF, the CFA has preserved the entire seven-part series.

More Information
The Film Group’s award-winning documentaries American Revolution 2 (1969) and The Murder of Fred Hampton are available on DVD (Facets Video, 2007); Cicero March, another entry from the Urban Crisis series, is included as an extra.

About the Archive
Founded in 2003, The Chicago Film Archives is a non-profit organization devoted to the acquisition, preservation, and exhibition of films that reflect the history and culture of Chicago and the Midwest. Holding over 9,200 titles, the CFA focuses its collections on independent documentaries as well as industrial, educational, experimental, sponsored, and amateur films.