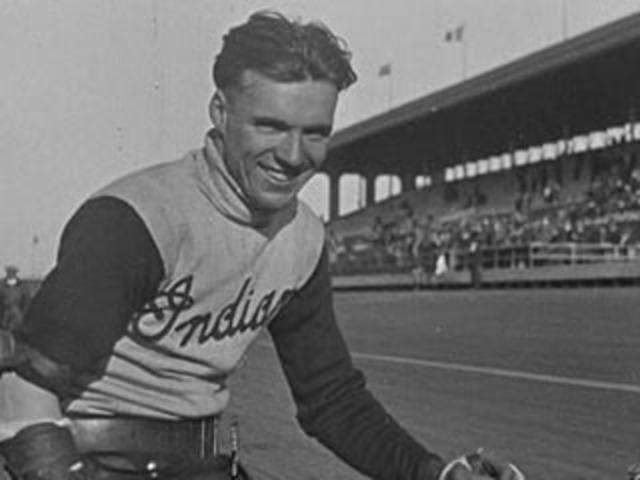 “Murderdromes”—that was the nickname given to the motordromes used in the early days of motorcycle racing. These circular wooden tracks, surfaced with two-by-fours, were modeled after the courses used for bicycle racing but with steeper banking, which enabled riders to maintain speed as they took the curves. Unfortunately, the banking—as much as 60 degrees—made for not only higher speeds but also for more deadly accidents. Because the grandstands were sometimes located above the uppermost edge of the track, even spectators were not immune to danger.

Indian Motocycle Company, the sponsor of this film, was a pioneer in the development of the motorcycle. The company was founded in 1901 by George Hendee, America's first national cycling champion, and Oscar Hedstrom, a watchmaker who in his spare time built standard and motorized bicycles. Built for speed, motorcycles were tested on the race track. In addition to manufacturing quality motorcycles for the general public, Indian invested heavily in specialized racing models, which not only served as prototypes for the next generation of consumer models but also, through the many records set and championships won by the company-sponsored racers, helped sell the Indian brand.

Beverly Hills Board Track Racing presents the highlights of one such competition that took place on April 24, 1921, at the Beverly Hills Speedway in Los Angeles, California. Although created at the time to promote Indian bikes, the film survives today as an important document for the history of motorcycle racing. Not only does it capture the short-lived Beverly Hills Speedway (1920–24), hyped as the world’s greatest speedway at the time of its construction, it also affords a glimpse of the charismatic Albert “Shrimp” Burns, one of the top dirt and board track racers of the time. In this particular event, he set a new speed record—102.5 miles per hour—for a stock motorcycle in competition. And this occurred after Burns had crashed in a previous race earlier that day and unexpectedly returned from the hospital in bandages to compete in the final race with a borrowed bike!

On the face of it, Beverly Hills Board Track Racing is a simple sports newsfilm bringing the excitement of motorcycle racing to moviegoers, but the intertitles—although mimicking the style of a sports announcer—leave no doubt of its promotional purpose. The viewer is constantly reminded that it’s not the daredevil rider alone who wins the race, but the man with the best bike: “ ‘Shrimp’ Burns and Indian take the lead as usual!”; “Burns and Powerplus step out in front!”; “Burns and Powerplus Indian Win!”

Watching the film today, it’s not the final close-up of the Powerplus engine (“the supreme Stock Motorcycle Engine of the World!”) that lingers with the viewer but the bandaged Burns, posing on his bike, smiling to the camera. While the “Shrimp” looks for all the world like nothing could stop him, just four months later the 22-year-old daredevil of board track racing would lose his life on a track in Toledo, Ohio. We are fortunate, at least, that his moving image lives on in this precious film preserved by the Motorcycle Hall of Fame Museum.

About the Preservation
The single surviving 35mm nitrate print of Beverly Hills Board Track Racing, donated by the son of a former Indian Motorcycle dealer, was preserved by the Motorcycle Hall of Fame Museum in 2002, with a grant of contributed services from the National Film Preservation Foundation. The film preservation work was donated by Cinetech and the video reference copy created through a gift of Erickson Archival Telecine.

More Information
The Indian Motorcycle Web site provides a good overview of the company. For a fascinating look at the early years of motorcycle racing, see Daniel K. Statnekov’s Pioneers of American Motorcycle Racing (1998), available online at his Web site, www.statnekov.com. The Motorcycle Hall of Fame Museum Web site has a tribute to Albert “Shrimp” Burns.

The Motorcycle Hall of Fame Museum in Pickerington, Ohio, was founded in 1990 by the American Motorcycle Heritage Foundation to preserve and celebrate the rich tradition of motorcycling in America.