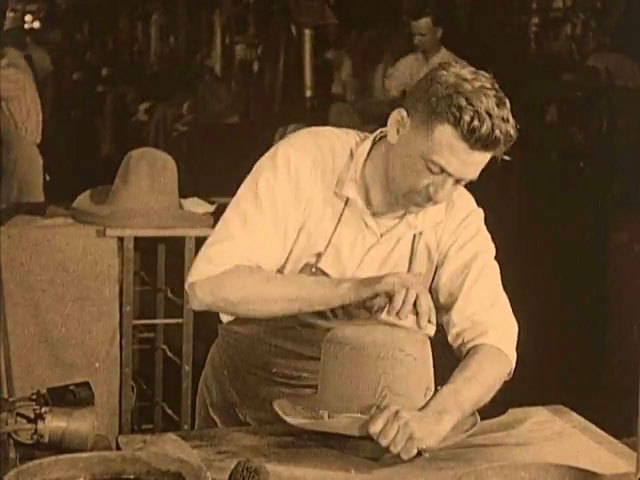 Featured in Lost and Found: American Treasures from the New Zealand Film Archive.

When Birth of a Hat was made, around 1920, hats were an essential item of everyday dress. Few Americans would have been caught venturing outside without one. The film provides an insider’s tour of the John B. Stetson Company’s Philadelphia plant, then the largest hat making operation in the world, with more than 5,000 employees spread across 32 acres of factory floors, and it turned out more than 3 million hats annually. Founder John B. Stetson (1830–1906) was famed as the inventor of the cowboy hat—the wide-brimmed, waterproof “Boss of the Plains” introduced in 1865. As the legend goes, he went as a young man to Colorado for his health and there developed the prototype from beaver pelts collected on a hunting trip. He set up shop in Philadelphia, embossing his name on every sweatband, and soon expanded into bowlers, derbies, top hats, and others.

“Courtesy of” John B. Stetson Company, as the opening title reads, Birth of a Hat is a sponsored film, which would have been provided free to theaters and circulated to merchants to drum up sales. It follows the pattern of perhaps the most common type of silent educational short in depicting a manufacturing process. Although essentially an advertisement, Birth of a Hat is genuinely educational, and its subtitle, “The Art and Mystery of Making Fur Felt Hats,” is justified. The hat-making process, which one might presume to be relatively simple, appears near miraculous in the initial stages here. The manufacturing trick behind fur felt hats is making cloth out of animal pelts without tanning the hides, indeed without using hide at all, except for trimming and hatbands. The result is a lighter hat that maintains shape and withstands rain. In these years the Philadelphia plant went through some 16 million pelts annually. The worldwide popularity of Stetsons is underscored by this film print turning up in New Zealand, and the firm had its largest international markets in Argentina, Mexico, Canada, and South Africa.

Stetson himself claimed, “There’s no advertisement equal to a well-pleased customer,” but Birth of a Hat comes close. It opens with a schoolbook history of hats before showcasing the modern methods that the Stetson company brought to their making. The assembly-line efficiency also relied on a good deal of handwork to deliver a consistently high-quality product. Stetson hats were relatively expensive, but by tracing the complex steps through which felt is made, shaped, styled, and finished, the film makes a case for their price as quite reasonable. In 1920, Stetsons could be bought for between $10 and $30 (this when bread was about 10¢ a loaf, dress shoes about $4, and Ford automobiles $260). The difference in Stetson prices was partly determined by the percentages of fur from the different animals shown in the film’s first moving images—with the costlier hats having a higher percentage of beaver and nutria, the lower much more rabbit. Each felt hat, although carefully styled, could be steamed and reshaped by its owner. Among the more famous customizers was Buster Keaton, who restyled Stetson’s fedora into his trademark porkpie hat.

This film captures the Stetson company at its production peak. The plant maintained a strict gender division, with men manipulating the felt and shaping hats and women sorting fur, finishing hats, and (in a step not shown in the film) making hatboxes. To command worker loyalty—and fight off unionization—the company offered a hospital, a school, and housing as well as a panoply of employee services, from paid vacations, life insurance, and pension plans to holiday turkeys and baseball leagues. With the Depression of the 1930s, demand for hats began to fade, accelerated by post–World War II fashion changes. Hat aficionados lay final blame to President John F. Kennedy, who completed his 1961 inauguration bareheaded. The massive Stetson plant in Philadelphia shuttered in 1971, and the company now manufactures in Texas.

Over the years, the company sponsored various versions of Birth of a Hat, including longer two-reelers with additional background about raw materials and distribution. An early version screened at the 1915 Panama Pacific International Exposition in San Francisco; a current one is viewable here on the firm’s website and makes a fascinating comparison: The mass of employees has vanished, but the process looks remarkably similar. There is no date on our version, but its film stock was printed in 1920, and the many American flags on view in the workrooms suggest the heightened patriotism of World War I and that the film may have been shot as early as 1917 or 1918. The company also at this time promoted its “Americanization” classes for immigrant employees, and it long took pride in making its products stateside. At the top of the border in several of the film’s intertitles is the Stetson coat-of- arms trademark, with a beaver and an eagle supporting a crested hat, below which reads “AMERICAN MANUFACTURE.”

(Many thanks to Jessica Getman for her research.)—Scott Simmon

About the Preservation
This industrial film was preserved by UCLA Film & Television Archive from a 35mm nitrate print received by the New Zealand Film Archive from Jack Murtagh and Tony Osborne. The source material was scanned at 2K resolution and output to 35mm film at Colorlab Corp., thanks to a Save America’s Treasures grant secured by the NFPF.

Further Viewing
For other “process” shorts from around this time, see De-Light: Making an Electric Light Bulb (1920) in More Treasures from American Film Archives and How the Cowboy Makes His Lariat (1917) in Treasures 5. For droll evidence of the ubiquity of hats in early 20th-century America, see At the Foot of the Flatiron (1903), also in More Treasures.