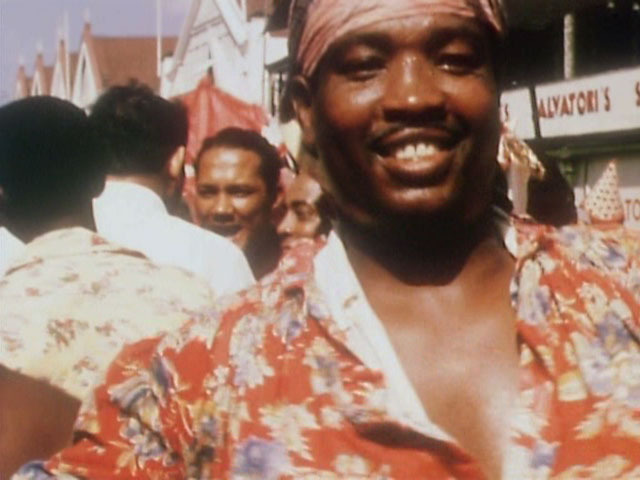 Fritz Henle was a versatile photographer who worked in a variety of genres, from fashion and celebrity portraiture to industrial landscapes. Born in Germany in 1909, he emigrated to the United States in 1936 and started freelancing for LIFE magazine. By the 1950s, he was one of the best-known photographers in America. His work was widely circulated in such periodicals as Harper’s Bazaar, Holiday, Town & Country, and U.S. Camera.

Henle loved to travel. His first professional assignment was photographing an ocean liner touring the Mediterranean, after which he took two weeks on his own to visit Egypt, Greece, and the Middle East. His fascination in documenting people and places is reflected by his publications: This is Japan (1937), China (1943), Mexico (1945), Paris (1947), Hawaii (1948), Virgin Islands (1949), The Caribbean (1957), and Holiday in Europe (1963). The Caribbean, with its unique blend of African, European, and Latin culture, however, held a special pull, so much so that in 1959 he moved to Saint Croix, in the U.S. Virgin Islands, where he lived until his death in 1993.

It’s not surprising that Henle’s beloved Caribbean figured prominently in his brief foray into filmmaking during the early 1950s. His first film, Virgin Islands, U.S.A. (1952), featuring his wife and three-year-old son, was part home movie and part travelogue. While technically an amateur film, it was made with the utmost professionalism and even covered in Modern Photography (November 1952) with a portrait of the filmmaker about to be hoisted up the mast of a yacht for an establishing shot. The Virgin Islands Corporation, which coordinated economic development for the islands, was so impressed that it bought the American television broadcast rights.

Henle’s next film, Carnival in Trinidad, took seed during an assignment photographing the festivities in 1951 for Holiday magazine. He returned the following year to make his own movie. “I had no crew, no advance script, no preparation of any kind, just my fascination,” explained Henle in Family Weekly (October 25, 1953). He enlisted Bob Sosenko, who had worked with him previously on Virgin Islands, U.S.A., to help edit the footage. The impressionistic travelogue was picked up for theatrical exhibition by Universal-International and shown across the U.S. from 1953 to 1954 under the title Calypso Carnival.

Carnival in Trinidad is a kaleidoscope of colors and sounds that seems to capture the very essence of the celebration. For historians, it is also a remarkable document of island traditions from a half century ago. Calypso expert Ray Funk has mined it to identify several famous mas bands—the costumed groups who join the parades—including Carnival designer Harold Sadenah’s Quo Vadis and steelband The Invaders seen dressed in full military regalia. Travelogue, historical record, and personal statement, Carnival in Trinidad remains a vibrant testimony to a still photographer’s mastery of the moving image.

About the Preservation
Working from the original 16mm positive print and optical soundtrack donated by Fritz Henle, the Harry Ransom Center created a preservation negative and viewing print through a grant from the NFPF.

More Information
In 2009, the Harry Ransom Center organized a retrospective of Fritz Henle’s photography in celebration of the centenary of his birth. You can view samples of his work online at the exhibition Web page and in the exhibit catalogue Fritz Henle: In Search of Beauty (2009), written by Roy Flukinger.

Another of Fritz Henle’s films, Yanvallou: Dance of the Snake God Dambala (1953), was preserved by George Eastman House through an NFPF grant.

About the Archive
Founded in 1957, the Harry Ransom Center is one of the premiere libraries for humanities research in the United States. The Center’s diverse holdings range from the dresses worn by Vivian Leigh in Gone with the Wind to the Watergate Papers of Bob Woodward and Carl Bernstein.