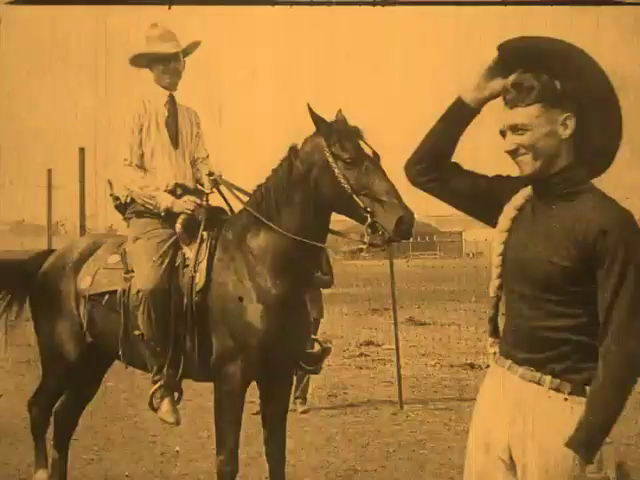 American competitive rodeo has its origins in friendly ranch competitions of riding and roping. By the early 1900s the community rodeo contests grew into a business and began to adopt the showmanship and pageantry of popular Wild West shows.

John Van “Tex” Austin was one of the first promoters to take rodeo on the road, drawing large urban crowds in the United States and abroad. Austin held his first annual World Championship Rodeo in 1920 on the lakefront north of what is now Soldier Field. He created a massive arena with outdoor lighting and seating for thousands, with the typical admission of $1.

Foghorn Clancy, seen here in the striped shirt holding a megaphone, was the most popular rodeo announcer of early rodeo. With the flair of a circus ringleader, he introduced the contestants and special local guests such as Gertrude Olmstead. His voice boomed in the arena in a time before microphones and large outdoor audio systems.

At age 16 Ruth Roach ran away from her family ranch in Missouri to join the Miller Brothers’ 101 Ranch Real Wild West show. She was a prominent rodeo contestant when she performed eight years later in Chicago. The news media proclaimed her the “World’s Most Beautiful Cowgirl.” Roach parlayed her fame into a brief Hollywood career, appearing in numerous silent films with Tom Mix and other Western film stars.

In what became known as Roman riding, a rider balanced precariously on the bare backs of two horses. This impressive feat was popular with audiences. Races were held between horsemen, and performers even jumped roadsters in the arena as demonstrations of skill and daring.

Another former star of the 101 Ranch Real Wild West show, Guy Shultz, is seen riding a young buffalo as a colorful exhibition of his skill. After this demonstration, he is encouraged to “bulldog” the buffalo; he wears a leather football helmet for protection. Bulldogging, now referred to as steer wrestling, was adapted from an act made famous by Bill Pickett, a beloved black cowboy who toured with the 101 Ranch Real Wild West show.

Red Sublette, one of the sport’s first rodeo clowns, is seen shooting blanks as he pretends to light a discarded cigarette. His career led directly to the role of colorful rodeo bullfighters who distract bulls in the arena while bull riders dismount or when a rider is entangled in the bull rope.

Bronc riding is the most traditional cowboy contest. Here, riders are seen mounting broncs in a manner common before wooden or metal chutes were used to hold the untamed horses still. A fellow rider bites the ear of the bronc while the horse is saddled, mounted, and released.

The Chicago rodeo was an open contest allowing anyone who paid the entrance fee to compete, although this rodeo drew many of the premier rodeo performers. A linotype operator from a local newspaper was brave enough to test his skill on a saddle bronc and was kicked in the head. He appeared a couple days later, his head bandaged, to “try ’em again”—only to earn another trip to the hospital.

Another quintessential ranching skill was calf and steer roping. Calves were roped for branding and castrating; older steers were roped and tripped up if they strayed from the herd, a practice that left the semi-wild animal dazed and compliant, ready to return to the protection of the herd. In the 1920s this exhibition of roping skill was often called steer tripping. Competitors are shown roping and tying steers weighing as much as 1,200 pounds, presenting a dangerous contest for both rider and horse.

In his memoirs Foghorn Clancy called 1920 “the biggest rodeo season in the history of the sport up to that time.” The early rodeos produced by Tex Austin represent a transition from the popular Wild West shows of “Buffalo Bill” Cody and others to the sport of modern rodeo, with its established competitive events.

Postscript
Thanks to the research of film scholar Dr. Robert J. Kiss, this Dutch print has been identified as an abridged version of Cowboy Jazz. The original two-reeler was made under the auspices of the Benevolent and Protective Order of Elks with the assistance of Fred Salinger, a Chicago native who worked for several years as manager of the Pittsburgh branch of the World Film Corporation. Salinger sold the film to S. & E. Enterprises, which distributed it on the State Rights market with great success. Arrangements were made so that exhibitors could market the film with the help of local Elks lodges.

About the Preservation
Cowboy Jazz was preserved in 2015 at Colorlab Corp using a tinted 35mm nitrate print from EYE Filmmuseum. The Dutch print is an abridged version of the 2-reel American original. The work was supervised by the Library of Congress and funded through a National Endowment for the Humanities grant secured by the NFPF.