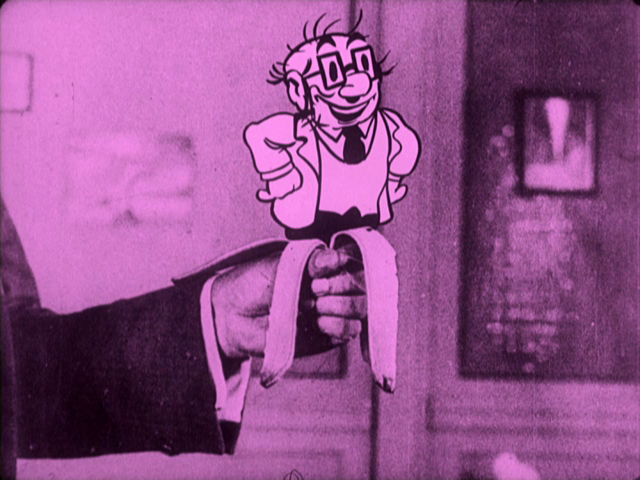 An elderly pint-size braggart inspired by Teddy Roosevelt, Colonel Heeza Liar was the first star created for an animated series. Debuting in Colonel Heeza Liar in Africa (1913), the Colonel went on to star in 59 films. By 1916 his creator, John Randolph Bray, “the Henry Ford of animation,” managed a factory of nine cartoonist-animators, four camera operators, and 30 assistants. One of those animators, Earl Hurd, brought with him the patent for cell animation (drawing moving figures on a transparent celluloid sheet placed over a background), giving Bray a time-saving technique and a means to extract license fees from competitors.

Yet by the early 1920s Bray Studios was in a slump, having lost its major distributor and most talented animators, including Hurd, Paul Terry, and Max and Dave Fleischer. Replacing them were veterans of William Randolph Hearst’s defunct animation studio—Vernon (later George) Stallings, Walter Lantz, and Clyde “Gerry” Geronimi (who later co-directed Disney features such as Cinderella and Sleeping Beauty). In need of a stopgap series, the studio resurrected Heeza Liar, dormant since 1917.

The Colonel’s new cartoons followed the model of the popular “Out of the Inkwell” series (which had departed from Bray with the Fleischer Brothers), and like Koko the Clown, Heeza Liar interacted with his animators. This involved a painstaking process of making blow-ups of each frame of live action film, overlaying cells of the animated action, and photographing the whole. Forbidden Fruit begins with New York in the grip of a banana shortage. Residents sing (or scream) “Yes! We Have No Bananas,” the hit novelty song of 1923 (inspired by real-life banana shortages—the film also references current events by mentioning mobster Louis Cohen, arrested for murder the same year). The scene shifts to animator Walter Lantz strumming the song on his guitar, before a co-worker presents him with a banana that transmogrifies into Colonel Heeza Liar, who tells the tale of how he ended “the great banana famine in 1923.”

As noted by animation scholar Donald Crafton, the Colonel’s solution is that of “classic imperialism.” Traveling to “The Ba-ha-nana Islands” (“Americans Keep Off”), Heeza Liar encounters a tribe of racially caricatured cannibals, who speak an equally stereotyped African American patois in the intertitles. Ingratiating himself with the cannibal Queen, the Colonel despoils the island of bananas and gives her a vicious sendoff. The animators in turn give him a laughing brush-off, viewing the Colonel as a modern-day Baron Munchausen.

Less unsettling than its racial attitudes, Forbidden Fruit’s animation employs enchanting effects—inkblots fly off pens and explode onto paper as detailed backgrounds, transporting viewers into an animated world where sweat drops bounce and snakes pop wheelies. But Bray’s boast of using as few drawings as possible is evident in the action scenes, which heavily rely on repeated animation, almost-bare backgrounds, and cycling (recycling a set of drawings to constitute a larger movement). Bray distributed his last cartoons in 1928, having been outcompeted by his former employees. They founded their own studios, which created characters—Fleischer’s Betty Boop, Lantz’s Woody Woodpecker, and Terry’s Mighty Mouse—remembered long after the little Colonel was forgotten.

About the Preservation
Forbidden Fruit was preserved at Colorlab from a 35mm nitrate release print found in the collection of the New Zealand Film Archive in 2010. The work was supervised by the Museum of Modern Art and part of a Save America’s Treasures project organized by the NFPF.