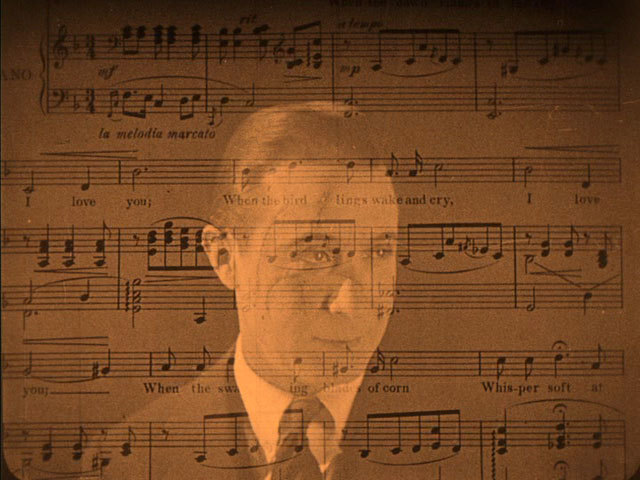 Defying Destiny is the only surviving production from the Rellimeo Film Syndicate. Missing an “e” in the film’s credits, “Rellimeo” is the backwards spelling of the surname and initials of its president, Dr. Orlando E. Miller—an unregenerate quack, scoundrel, and charlatan.

While peddling hernia cures in Denver during the 1890s, Miller was convicted of bank fraud and did time in Leavenworth. In Chicago he founded a tuberculosis sanitarium that charged exorbitant fees for sham treatments. In 1909 the Journal of the American Medical Association exposed the high death rate of Miller’s patients and called him “one of the most heartless and cruel of the innumerable ‘consumption cure’ fakes.” Decamping to England, Miller opened another sanitarium but was jailed for the manslaughter of a patient.

In the early 1920s he returned to the states and reinvented himself as an “Applied Psychologist,” lecturing to thousands of devotees on the West Coast. Deciding the time was right to make “a sound psychological film,” Miller sold his audiences stock to set up the Rellimeo Film Syndicate in San Francisco. After obtaining a script from Grace Sanderson Michie, wife of Rellimeo’s general manager, Miller corralled journeyman director Louis Chaudet and “the nearest to an all-star cast that has yet been achieved by an independent producer” (according to Variety).

Set in the small town of Riverdale, Defying Destiny opens with Jack Fenton (Monte Blue) being scarred while saving the life of his sweetheart Beth Alden (Irene Rich), whose grateful father (James Gordon), president of the local bank, offers him a job. Middle-class Jack becomes head teller, joins the country club, and plans to marry Beth, but his upwardly mobile behavior stirs resentment. When he’s falsely accused of embezzlement the town’s upper crust turns its back. Jack endures self-exile until a chance encounter with a plastic surgeon enables him to return home incognito and seek vengeance.

Its title recalls Miller’s 1922 lecture “The Mastery of Fate,” but Michie’s story is more interested in class than psychology or destiny. Jack and the real embezzler aspire to the lifestyle of the country club, the hub of upper-middle-class society. When Jack returns to the club disguised as a wealthy investor, he’s welcomed and offered cigars by those who shunned him. Using the club as his instrument of his revenge, he literally blows smoke in the face of the chamber of commerce. The film’s contempt for hypocritical small town life and public opinion (which it compares to a wolf pack) recalls Sinclair Lewis’s Babbitt, published a year earlier.

Despite its shady producer, Defying Destiny is hardly a fly-by-night production: Chaudet’s slick direction foregrounds the opulent furnishings of the Aldens’ home and relays the story through adroit crosscutting, evocative superimpositions, and ominously slow-burning close-ups. Variety wrote, “This feature looks like sure pop for the neighborhoods, and may also find its way into some of the better class picture palaces…Although the story may not be sensationally original, its treatment is that in spots.” Exhibitors Herald and Film Daily agreed, praising the film as a “well-staged,” “good program picture.”

But when it came to embezzlement, life followed art. In 1922 Rellimeo’s permit to sell stock was denied in light of its “tangled affairs.” Two more films were produced, but by 1926 Miller had skimmed more than $100,000 and fled the country, leaving his staff to face the heartbroken stockholders. In 1934 he was finally hunted down by federal agents. During the trial his devotees were discovered “concentrating” on the jury to psychically arrange an acquittal, but to no avail—Miller was convicted on five counts “of using the mails to defraud” and given six years in federal prison.

About the Preservation
Defying Destiny is one of several Selznick-distributed films that were rediscovered at the New Zealand Film Archive. The 35mm tinted nitrate release print was preserved in 2010 at Colorlab Corp. under the direction of George Eastman Museum with support from the NFPF.

Further Viewing
Monte Blue’s most celebrated performance is in White Shadows in the South Seas (1928), the first MGM film with a pre-recorded soundtrack, now available from the Warner Archive. Irene Rich features in Ernst Lubitsch’s adaptation of Lady Windermere’s Fan (1925), included in the NFPF’s DVD set More Treasures From American Film Archives. Grapevine Video offers three Chaudet features from 1926: Eyes Right!, Fightin’ Jack, and In the Tentacles of the North.