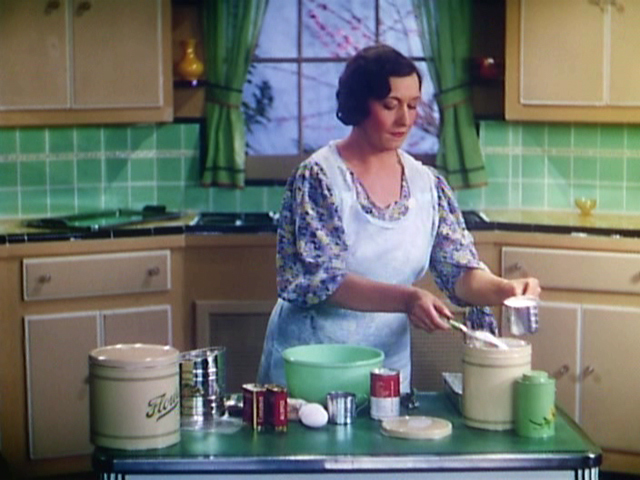 The scenario involves prosperous housewife Mrs. Mortimer Jones, who has only an hour to finish preparing dinner for her husband and six of his clients. Thanks to an electric oven, mixer, juicer, and dishwasher, she finishes with time leftover to attend the theater. Free of drudgery, Mrs. Jones indulges her interests outside the home while remaining a “serene, untired, gracious hostess” capable of charming her husband’s clients. Middle-class and placidly efficient, she’s a stark contrast to the wealthy neurotics in George Cukor’s Dinner at Eight, released a few months earlier. Dinner for Eight never names its sponsor, but its narrator informs us that when baking cakes in a modern kitchen “Mr. Edison does the mixing.” At the end he admits “I don’t know who we should admire the most—Mrs. Jones, who prepared the electrical dinner, or Mr. Edison, who made it possible.”

Filmed in two days in February 1934, the short opened in May at the Paramount Theatre in Los Angeles, and was described by the Los Angeles Times as “an amusing expose of what goes on in the modern kitchen while the master is away” and “an outstanding novelty film.” For audiences the novelty was split between the appliances and Technicolor’s new color process, a breakthrough in capturing the full color spectrum on black-and-white film. To do so required the creation of three records documenting red, green, and blue. Since 1917 Technicolor had offered a two-color process that could capture red and green; by the early 1930s it finally captured the missing color.

The new process involved feeding three strips of film into a special camera, where two prisms divided incoming light, passing one third to the back, where it went through a green filter and was recorded onto a film strip. A gold-flecked mirror placed between the prisms reflected the remaining light through a magenta filter, which transmitted red and blue light onto two strips of film laid back-to-back, the front sensitive to blue, the rear to red. The color records on the three black-and-white film strips were then subjected to laborious dye-transfer printing to create a color print.

Dinner for Eight’s director Rodney Gilliam was a specialist in industrial filmmaking, but those truly responsible for the look of the film were the employees of Technicolor, whose cameras could not be rented without color consultants. Natalie Kalmus—ex-wife of Herbert Kalmus, founder of Technicolor—was the color art director, a role she continued in hundreds of Hollywood productions until 1948. Her desire for harmonious color schemes, conveyed through sets and costumes, determined the look of the kitchen: the balance between its beige cabinets and green trim, tables and tiles, along with the contrasting red sun pattern on the floor. The new color process’s ability to register blue is trumpeted by Mrs. Jones’s dresses and eye-popping flowers.

Such dazzling color was a given with cinematographer Ray Rennahan. Having proved himself Technicolor’s best cameraman with his mastery of the two-color process, he became the premier cinematographer to harness the power of three-strip color, beginning with Disney’s Flowers and Trees (1932). Dinner for Eight, only the second film made with the process to reach the public, preceded his work on the more famous short La Cucaracha (1934) and the first feature in three-strip color, Becky Sharp (1935). Nominated for an Oscar twelve times, Rennahan won for Gone with the Wind (1939) and Blood and Sand (1941). His triumphs were those of Technicolor, whose sumptuous colors have yet to be surpassed. Dinner for Eight is vivid proof.

About the Preservation
The 3-strip negative of Mrs. Mortimer Jones Prepares “Dinner for Eight” was donated to the Huntington Library by Southern California Edison in 2005; from these nitrate elements Film Technology Inc. was able to create new preservation masters and prints. Funding was provided by an NFPF grant.

About the Archive
In 1919 railroad magnate Henry Edwards Huntington made his collections available to the people of California as “a free public library, art gallery, and museum and park containing objects of artistic, historic, or literary interest.” Today the Huntington Library, Art Collections, and Botanical Gardens holds more than 7.5 million items, ranging from Shakespeare’s First Folio to Henry David Thoreau’s manuscript of Walden. It also holds the photographic archive of Southern California Edison, containing nearly 600 reels of film and more than 70,000 images taken between 1887 through 1975.