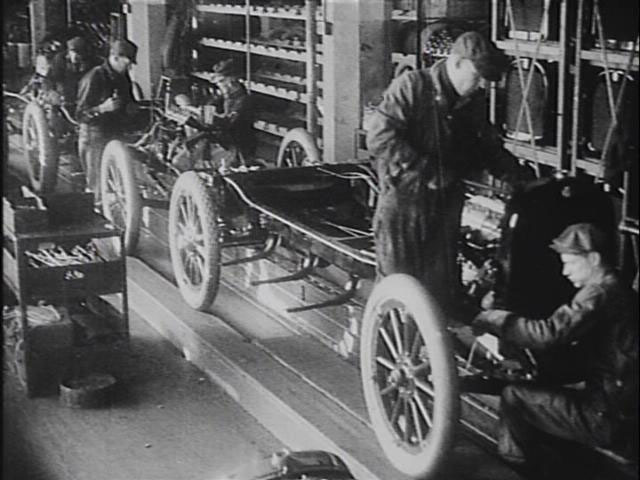 In the 1900s, John F. and Horace E. Dodge of Detroit became the major suppliers of drive trains to the Ford Motor Company. They achieved such a stellar reputation for quality that when they decided to manufacture their own automobiles, incorporating as the Dodge Brothers Motor Car Company in 1914, 13,000 dealers registered to sell the new vehicles before a single auto had been produced.

The first Dodge model, completed in November 1914, was an immediate success. It cost more than Ford’s Model T but was thoroughly tested and soon became known for its durability. The vehicles proved so reliable in the U.S. Army’s campaign against Pancho Villa in 1916 that the military ordered more, a PR coop that cemented Dodge’s reputation.

In 1916, the company created a film department to promote the Dodge brand. This film appears to be one of its first products. It shows the company’s assembly line in action, demonstrating to viewers the workmanship and care invested in each vehicle. The beginning is missing, lending credence to the hypothesis that the film may be the three-reel profile of the company’s production process distributed in 1917 to Dodge dealerships.

According to Automobile Topics (April 29, 1917), the company had initially released its films directly to movie houses but soon found it easier to reach prospective buyers through its own sales outlets. Dodge not only provided the film but also sold projection equipment, “at a price that is exceeding moderate.” “The machine,” reported the same trade paper, “is entirely self-contained, looking very much like an enlarged suitcase, and may be operated anywhere without violation of the underwriters’ rules. When placed twelve or fifteen feet from a screen or white wall, it projects a picture about 12 x 15 inches that is absolutely distinct and remarkable steady.”

The motion-picture sales approach was used by dealers across the United States. The A.E. Staacke Automobile Company in San Antonio, Texas, for example, showed the three-reel “Dodge in the making” film in its back room. The local paper commented, “by simply…taking a seat….[each viewer] sees how the car is made, where it is made, and by whom.”

About the Preservation
This film was preserved under the direction of the Academy Film Archive from a 35mm tinted nitrate print found in the collection of the New Zealand Film Archive in 2010. The work was funded through a Save America’s Treasures grant secured by the NFPF.

The second and third of the original three reels were found; however, the first reel–reportedly detailing the path of the raw materials into the factory–is still missing. The image distortion seen in the shots in the upholstery department is the result of severe nitrate decomposition.