Please answer both questions below to proceed to the video. Thank you.
FROM

Home movie (1938) from the Falk Collection 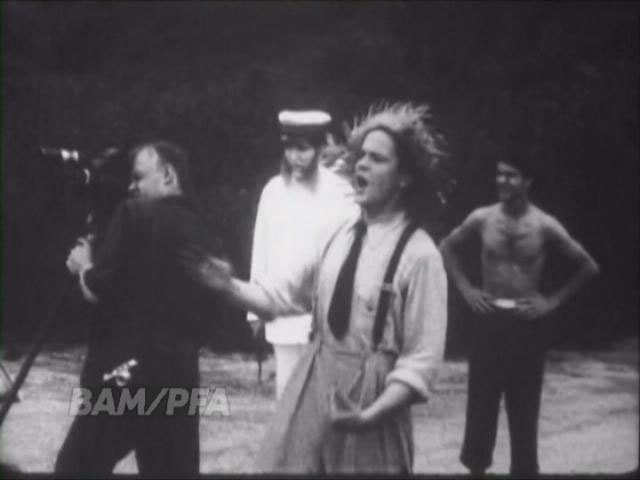 This fascinating home movie—the earliest known footage of Orson Welles directing a film—comes from the family of Myron S. Falk, one of many investors in the Mercury Theatre. In the 43 seconds excerpted here, the Mercury Theatre troupe is on location in July 1938 shooting the movie prologue to Act III of Too Much Johnson. The scene is the fight between the Cuban plantation owner Johnson (Howard L. Smith) and the wronged husband Dathis (Edgar Barrier), with the fast-talking Billings (Joseph Cotten in his first screen role) doing his best to keep them from killing each other. Standing in for Cuba is Tomkins Cove Quarry, just north of Stony Point State Park on the Hudson River.

The clip begins with the suspendered Welles, in a fringed straw hat, intently shouting directions, with the cameraman at his shoulder. Running out of the shot, Barrier darts behind them, losing his pith helmet. In the next bit Joseph Cotten—his back to us—follows with his umbrella. Cut to Barrier and Smith wading ever deeper in the brackish quarry lake, going at it with swords as Cotten (in white) struggles to intervene. No stand-ins here; Welles was not a director to pamper his actors.

In the next scene, Welles demonstrates to Ruth Ford, who plays Billings’s wife, how to do a silent-comedy run. She follows his lead as she races past the fake tropical palms alongside Johnson’s unwilling mail-order bride, played by Welles’s own wife, Virginia Nicolson Welles. As the men fight off screen, the two shriek in histrionic alarm. The excerpts end with the director half-jokingly taking a bow. In these simple images of a summer lark we can glimpse the discovery by the 23-year-old-Welles of a career in filmmaking.

About the Preservation
The 16mm black-and-white 79-foot original positive was donated to the UC Berkeley Art Museum and Pacific Film Archive by the family of the Mercury Theatre investors. BAM/PFA created a preservation negative and viewing print to protect the rare material. For licensing, contact FalkCollection@filmpreservation.org.

About the Archive
For more than 40 years, the University of California, Berkeley Art Museum and Pacific Film Archive has been a visual arts center whose diverse exhibition programs and collections of more than 16,000 art objects and 15,000 films and videos are characterized by themes of artistic innovation, intellectual exploration, and social commentary. BAM/PFA presents some 380 film programs annually, reflecting the full spectrum and cultural diversity of world cinema, past and present, and offers researchers access to the film collection and library of thousands of books, periodicals, posters, stills, and 95,000 files of documentation. Among the film collection’s strengths are Soviet cinema, Japanese cinema, and independent film, especially Bay Area avant-garde film and video art. For more information, visit bampfa.berkeley.edu.