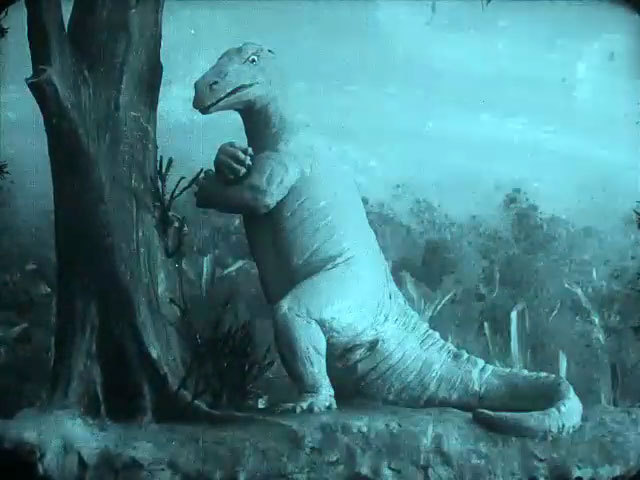 The Service Film Corporation was formed to help supply the demand for short subjects in motion-picture theater programs. Trade ads in the spring of 1925 announced the company’s ambitious release schedule: two-reel Westerns, miniature dramas, Burton Holmes travelogues—and an intriguing assortment of novelty reels, leading off with Fifty Million Years Ago. We are indebted to film scholar Dr. Robert J. Kiss for discovering the origins of this and the other novelty shorts: they were in fact shorter versions of longer documentaries produced in Germany. Service Film imported these productions, adapting them for the American market by cutting them down to one-reel lengths and leavening their serious content with humorous intertitles. This provenance is clear enough from the films’ titles: Fifty Million Years Ago had been produced in 1924, by unidentified German stop-motion animators, as Vor 50 Millionen Jahren.

Whatever the original film’s impact may have been in Germany, Service Film’s motives for releasing it in America are clear enough. In 1925 it was timely in more ways than one. As repackaged for American audiences, it deals nominally with Darwin’s theory of evolution (without ever mentioning Darwin by name). Evolution was already a subject of topical interest, but it became a much hotter topic in 1925 with the onset of the Scopes trial. John Thomas Scopes, a Tennessee schoolteacher, was charged with teaching evolution in defiance of state law, and his trial assumed international notoriety as the “Monkey Trial.” Fifty Million Years Ago opened at the first-run Piccadilly Theater on Broadway in July 1925, while the Scopes trial was in progress, effectively capitalizing on that notoriety. (For good measure, one of the titles includes a mention of “Volstead”—a reference to the Volstead Act, i.e., Prohibition, another subject very much on the minds of most Americans in 1925.)

Despite the stated topical intent, Fifty Million Years Ago devotes most of its footage to prehistoric life, in particular stop-motion-animated dinosaurs. In summer 1925 this gave the short another kind of relevance: Only a few months earlier, the First National feature The Lost World pictured realistic dinosaurs running amok on the screen. The Lost World dinosaurs were the work of stop-motion animation legend Willis O’Brien (better remembered today for the 1933 classic King Kong). In 1925 The Lost World created a sensation among moviegoers, and Fifty Million Years Ago cannily exploited that popular interest. Trade reviews of the short called attention to the similarity and encouraged exhibitors to advertise it to their patrons.

Today we see the film from a different perspective. In some quarters the debate over evolution stubbornly persists, but by and large, we can view Fifty Million Years Ago far removed from the specific concerns of the 1920s. What is immediately striking about the film is its animation. The filmmakers make creative use of a range of animation techniques. The opening scenes depicting the formation of the earth, and early marine life, employ such simple means of simulating movement as a moving camera and sliding cels and overlays. One primal, insect-like creature is pictured by means of an elaborate jointed cutout, its legs and antennae manipulated frame by frame—a technique favored by some early animators.

The dinosaurs in Fifty Million Years Ago are modest cousins to O’Brien’s rampaging monsters in The Lost World. Not to be seen here are such sophisticated refinements as the “breathing” action of O’Brien’s creatures, or ambitious set-pieces such as dinosaur battles or stampedes. But the dinosaurs in our short have subtle charms of their own. As they graze, or warily sniff the air, they supplement their main actions with lifelike embellishments: a swishing tail here, a weight-shifting movement there. One reptile nibbles at a twig, registers distaste, then turns and glares resentfully at the camera. Most of the creatures in this film pose sedately before painted backdrops or simple settings; the effect is that of museum dioramas come to life. It’s augmented by a quiet undertone of humor, as when one dinosaur pauses to scratch a persistent itch, or when a title predicts that another Ice Age is imminent—in another 10 thousand years or so. It’s not hard to imagine that Fifty Million Years Ago provided an intriguing diversion for movie audiences of 1925, and it continues to hold a unique interest today.

About the Preservation
Fifty Million Years Ago was preserved in 2015 at Colorlab Corp using the only known surviving element: a tinted 35mm nitrate print from EYE Filmmuseum. All intertitles survived as single flash frames. A few of the frames were difficult to read. All have been stretched to the proper length and a few have been recreated. The restoration was supervised by the Academy Film Archive and funded through a National Endowment for the Humanities grant secured by the NFPF.