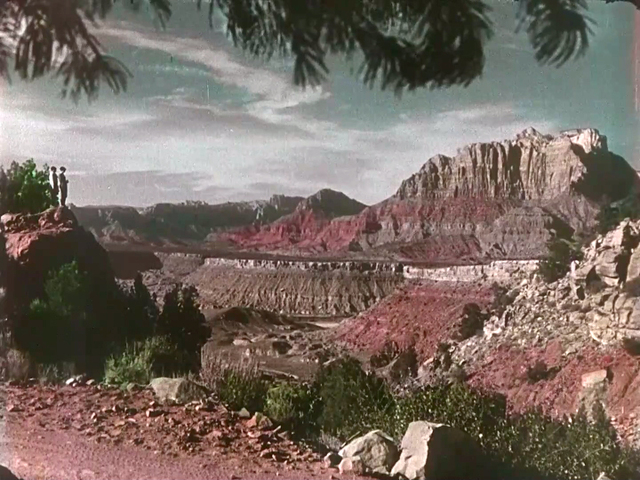 Flaming Canyons was released by Castle Films in 1929 as part of a series called “Castle Color Novelties.” The film is a feast for the eyes, featuring a stunning palette of stencil colors in red, orange, pink, green, yellow, pale blue, and light brown. These colors are overlaid onto images of the famous canyons of the American Southwest: Zion, Bryce, and the Grand Canyon. As is common with travel films, Flaming Canyons ranges across multiple scenic highlights, condensing a trip that would take several days in person into a running time of just over 13 minutes on screen. The purpose of such films was two-fold: to promote actual tourism to the region, and more broadly, to provide a vicarious tourist experience for the audience in the movie theater. The film alternates between images of natural landscapes (rock formations, cliffs, canyons) and images of recreation (touring cars, the Zion Hotel, the Grand Canyon Hotel).

The stencil coloring seen here is an applied color process, meaning that color dyes were added to individual black-and-white positive prints using a mechanical stencil coloring technique. Photographic processes in which the color is reproduced in printing (such as Kinemacolor and early Technicolor) were already being explored by this time, but in the silent era, applied color techniques were more frequently used. In fact, a majority of films in the silent era used some form of applied color, especially monochromatic color tinting, which was common in both fiction and nonfiction films. Stencil coloring, by contrast, was more spectacular and typically involved multiple pastel dyes, and it was frequently used in scenic and travel films such as this.

Flaming Canyons is a great example of the contradictory function of color in cinema: color here adds both realism and artificiality. Stencil coloring was frequently advertised as a realistic technique, on the principle that it mimicked the multi-color perception of human eyesight and thus made the real world look more naturalistic. But the colors in this film are not the colors in which we see the real world. For example, halfway through the film, an intertitle states: “The ‘Temple of Osiris’ was painted with Nature’s most luxuriant palette.” Subsequent shots show rock formations overlaid with non-naturalistic hues: a densely saturated red, a medium-range pink, dirt lightly colored with a pale tan hue, and skies of light blue. While these colors are somewhat mimetic – the rocks are not colored blue, for example – the intensity of some of the hues (particularly the deep red) and the flickering, painterly quality of the stencil coloring lends these images a fantastical, spectacular quality. While the specific stencil process used for this Castle film is unknown, the technique used here is evidently less precise (and thus more painterly) than the machine-cut stencil processes developed by the French companies Gaumont and Pathé in the 1910s. The color flickering effect of this particular stenciling process (which may have been hand-cut rather than machine-cut) can be seen prominently in the mule deer shots in the final third of the film.

In 1929, many theaters in the U.S. and around the world were converting to sound. In fact, several notices in the 1929 motion picture trade press announce that the “Castle Color Novelties” series was to be distributed by the Sound-Films Distributing Corp. and released with sync-sound. However, the print that survives today is silent, and despite these press announcements, the sync-sound may never have been realized. Regardless, Flaming Canyons would have been accompanied by live music even when it was projected silent, and the new piano music composed and performed by Stephen Horne here recreates the emotional affect that was a central part of the appeal of travel films such as this.

Travel films such as Flaming Canyons tend to emphasize the twentieth-century tourist appeal of the places they depict, rather than providing historical, cultural, or scientific information. The modernity of this wilderness destination is emphasized by the cloche hats, flapper dresses, and fashionable swimming costumes glimpsed in shots of tourists at the Zion Hotel. At the same time, the ancient quality of the scenery is repeatedly asserted: a feeling of timelessness is central to the romantic appeal of these landscapes. Of course, there is a real history to the places depicted here, but the film emphasizes the present tense. Although one intertitle refers to “the rock dweller of ages past,” the film makes no specific reference to the Paiute Indians who lived in the region before European settlement, though it does use the Paiute name for the Mukuntuweap River, which is now (and was in 1929) known as the Virgin River. The film also does not dwell on the Mormon settlement that happened in the late 19th century, and even though these canyons had only recently been designated national park lands in 1929, the film does not discuss such classifications. Instead, the film shows – without explaining – a series of remarkable natural landmarks, and heightens their spectacular quality through the use of applied colors. This is a technological vision of nature’s grandeur in which, indeed, “With each mile, the beauty increases.”

—Jennifer Peterson, Associate Professor and Chair of Communication at Woodbury University and author of Education in the School of Dreams: Travelogues and Early Nonfiction Film.

About the Preservation
Flaming Canyons was preserved in 2015 at Colorlab Corp using the only known surviving element: a tinted 35mm nitrate print from EYE Filmmuseum. The intertitles were translated from the Dutch and are modern recreations. The work was supervised by the Academy Film Archive and funded through a National Endowment for the Humanities grant secured by the NFPF.