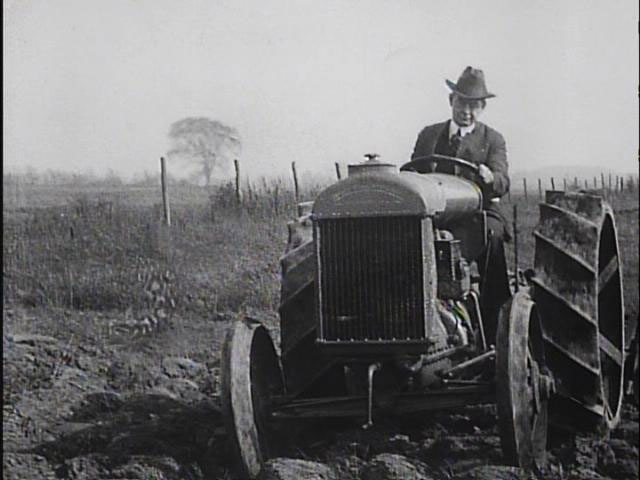 Henry Ford started mass-producing all-purpose tractors at his company’s Dearborn, Michigan, plant in 1917, under the brand name Fordson, a contraction of Henry Ford & Son Inc. Fordson began as business convenience, a spin-off company that enabled the automobile mogul to circumvent his skeptical board of directors and outmaneuver a competitor who already trademarked the “Ford Tractors” name. Although the Ford and Fordson companies eventually merged, tractors continued to be produced under the Fordson brand through the 1960s.

Ford’s efficient assembly line made it possible to introduce the Model F, demonstrated in this promotional film, at the low price of $750. Four years later the price was cut to $395 and put within reach of many American farmers. By the late teens, more than 6,000 Fordson tractors were in use in Britain, Canada, and the United States, giving the company an estimated seventy percent market share. During these early years, Ford was the only automotive firm to produce cars, trucks, and tractors.

Fordson tractors played a significant part in the mechanization of farming in the early 20th century but were not without their problems. Early models had a seat that would heat up to scorching levels under heavy use and the lightweight carriage could rear up and flip over. Even after design improvements corrected these flaws, the tractor required heavy maintenance.

To help sell product, Ford produced dozens of promotional films for screenings by dealers and traveling sales agents. Fordson Tractors is one of the earliest. Shot on a farm in Waterloo, Ontario, the film shows how to operate the Model F and demonstrates its power and versatility over the traditional horse-drawn farm team. This customized New Zealand copy opens with a screen directing customers to the three North and South Island locations of the Colonial Motor Company, the Fordson distributor. The copy is not complete.

Fordson wrapped up American production in 1928 but continued operations until 1967 in Great Britain and Ireland, where the tractors still have an active community of enthusiasts.

(Many thanks to Katy Ralko, a graduate student of Caryl Flinn at the University of Michigan — Ann Arbor, for her informative paper about this film.)

About the Preservation
Fordson Tractors was preserved from a 35mm nitrate print uncovered at the New Zealand Film Archive in 2010. Due to severe nitrate decomposition, the source material had suffered image loss for much of its first half. (To skip most of the deteriorated sections, start at minute 6:30.) The preservation was completed by Film Technology Company Inc., under the supervision of the Academy Film Archive, and funded through a Save America’s Treasures grant awarded to the NFPF in 2011.