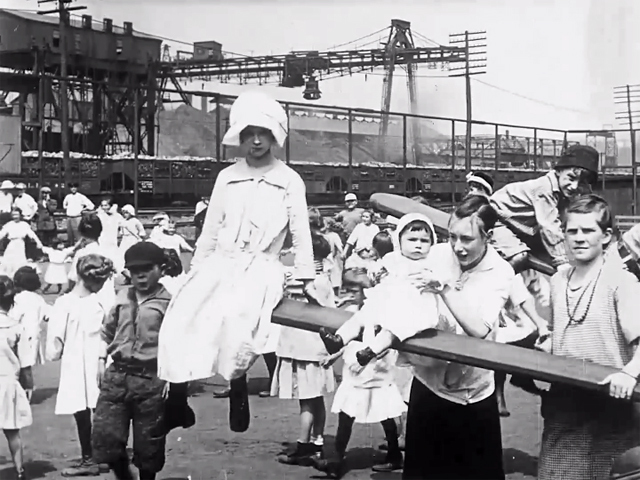 The industrial film From Ore to Finished Product is a four-reel production commissioned by the National Tube Company and probably shot around the Fourth of July 1915. In 1921 the company produced a small book with the same title. The motivations for creating this early film were complex — partly a baseline advertising effort, partly an attempt to diffuse public unease over the rise of large corporations, and partly an effort to quell labor discord. The first three reels of the film documented the technical process of making steel and steel tubes. These reels probably didn’t survive, but reel four did, and it admirably documents the company’s efforts at welfare capitalism.

National Tube Works Company was formed in the 1870s when Flagler & Company relocated from Boston to McKeesport, Pennsylvania, near the nation’s iron and steel center of Pittsburgh. In 1899, during the height of the American merger movement, lawyer William Cromwell and banker Edmund Converse, with the help of financier J.P. Morgan, brought together 16 pipe and tube manufacturers under the National Tube name. In 1901, National Tube merged with other steel companies as part of the formation of the U.S. Steel Corporation.

In the second half of the 19th century many American manufacturing companies expanded in size, and the resulting economies of scale and application of new technology lowered costs of production. By the late 1880s and 1890s cutthroat competition broke out as firms fought for larger shares of the national and global markets. Faced with high fixed costs, businesses followed many strategies to prevent ruinous price battles, including trusts, mergers, and monopolies. Companies often absorbed their suppliers or distributors in an effort to control the market. Kickbacks, bribery, price fixing, and secret deals were widespread. Americans became uneasy and debated the virtues and detriments of free enterprise. Films such as From Ore to Finished Product helped counter the impact of Progressive era muckraker books (like Ida Tarbell’s The History of Standard Oil).

In the early 1900s the rising power of organized labor and general concerns regarding American capitalism versus Marxism motivated some business leaders to turn to the new medium of film to sway public opinion. As W.L. Schaefer of the National Tube Works advertising department explained, “Our motion pictures were taken for the purpose of using them as educational propaganda” (Reel and Slide, October 1918, p. 43–44). In 1909 National Tube shut down the Dewees Wood plant after a bitter strike. As a company official explained, “McKeesport…has a population that is largely in sympathy with lawlessness, and has a mayor who will not use his police to protect the property of manufacturers and will not permit a nonunion man seeking work to enter town” (National Tube Works Historical Marker). Interestingly labor was also an early adopter of film as a persuasive tool.

At the turn of the century, increasingly complex operations, the threat of unionization, and massive influxes of immigrant workers led many businessmen to change the way they ran their companies. The quest for cheap labor had led factory managers to hire recent immigrants who spoke little or no English. The chorus of foreign tongues seemed to confirm managers’ beliefs that their companies were slipping out of their control. As workers’ rights and managers’ prerogatives clashed, the two sides battled over control of the workplace. Workers struck over hours, new machinery, work rules, and union representation in an attempt to retain some control over their jobs. Managers’ ethnic and racial fears of the rising tide of immigrant workers in the American workforce led them to seek new methods of control such as welfare work (“welfare work” is a period term growing out of the early 20th-century personnel movement and should not be confused with later concepts of state-sponsored welfare). Proponents of welfare work, the subject of this film, believed that improvements such as lunchrooms, recreational facilities, company outings, and vegetable gardens would instill company values and thereby boost productivity. This paternalistic corporate attitude sometimes even intruded into employees’ personal lives. By making changes in work environments, company officials sought to remake the working class in their own middle-class image. The use of employee gardens as a tool of control is not always apparent, but labor stoppages become much less likely when striking workers not only lose their pay but also their source of vegetables.

While paternalistic, welfare work was not always egalitarian; companies often excluded blacks from their welfare programs or established separate facilities for them. From Ore to Finished Product shows that National Tube followed a different course, and a number of scenes show white and African American children playing together. However, other aspects of mill life likely remained segregated. In 1937 U.S. Steel signed a contract with the Steel Workers Organizing Committee, which was one of the first integrated industrial unions.

About the Preservation
From Ore to Finished Product was preserved in 2015 at Colorlab Corp. using a 35mm nitrate print from EYE Filmmuseum. The work was supervised by the National Museum of American History, Smithsonian Institution, and funded through a National Endowment for the Humanities grant secured by the NFPF.

About the Music
The new music for this presentation was composed and performed by Michael D. Mortilla. Michael has been composing professionally for more than four decades and has accompanied silent film screenings throughout the United States. Among his many NFPF projects are the accompaniments for the DVDs Treasures 5: The West and Lost and Found: American Treasures from the New Zealand Film Archive. The score for From Ore to Finished Product was improvised in one continuous “take” in order to recreate the live experience of an audience at the time of the film’s original release. According to Michael, “the creative process involves running through the film repeatedly, recording most of the performances. A typical piano solo for a one-reeler like this usually requires about 14 takes to arrive at the final musical work. There is little to no editing of my performances, and absolutely no editing of the score’s overall structure.”