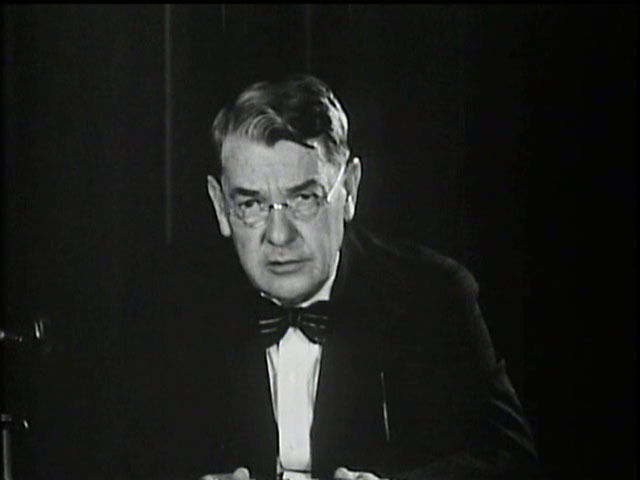 Governor Marland Declares Martial Law, a political ad disguised as a newsreel, is one of the few surviving campaign films from before 1952. The Oklahoman behind it remains one of the most fascinating figures in his state’s colorful history.

Ernest Whitworth ("E.W.") Marland (1874–1941), a trained attorney, became a self-made millionaire in the oil fields of Pennsylvania before losing everything in the stock market crash of 1907. Starting over, he moved west and struck oil in Ponca, Oklahoma. By the 1920s, his Marland Oil Company controlled ten percent of the world’s oil reserves. It brought innovation to the industry, introducing new equipment, starting the first oil company research division, and insisting on high wages and health insurance for employees. However, through a hostile takeover by J.P. Morgan and Company in 1928, Marland was forced out and again lost his fortune. Turning to politics to fight back, he won a seat in Congress in 1932 and, two year later, became Oklahoma governor by pledging to bring the New Deal to his state. Although stymied on many fronts by his fiscally conservative legislature, Marland enlisted help from Washington and gave jobs to more than 90,000 Oklahomans through federal Works Progress Administration projects.

The film celebrates one of Marland’s more popular acts as governor. In 1936, when Oklahoma City officials opened to private interests the drilling of oil reserves under the State Capitol from nearby residential property, Marland fumed. He declared martial law, arguing that all Oklahomans deserved a share of the profit. Marland won the stand-off and Oklahoma became the only state with oil wells on the capitol grounds.

Set at the intersection of news and propaganda, Governor Marland Declares Martial Law exploits the confrontation to promote Marland as a champion of the people. The ad was used to boost for the governor’s run for the U.S. Senate—a campaign unmentioned by the film’s pseudo-newsreel narrator—-and was shown in theaters throughout the state. The public, however, wanted governor to finish out his term. He lost the election and never held public office again.

About the Preservation
Working with a 35mm print, the Oklahoma Historical Society created a new preservation negative and viewing print through an NFPF grant.

More Information
Marland and Oklahoma oil are discussed in the Oklahoma Historical Society’s Encyclopedia of Oklahoma History & Culture. The governor’s estate and his earlier mansion, both in Ponca, Oklahoma, are open to the public.