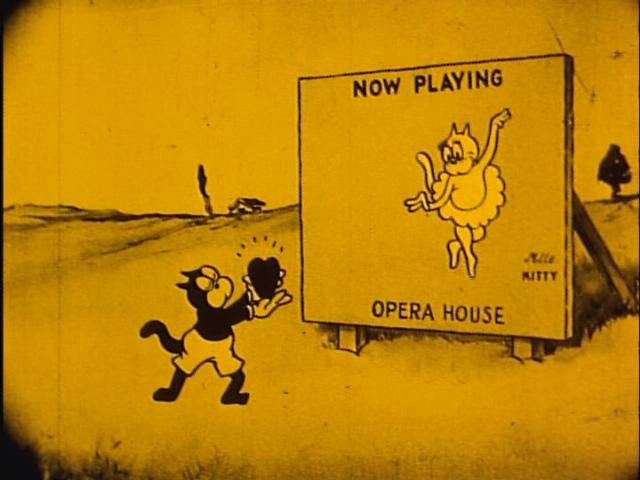 Although never known for trailblazing artistry or wit, Paul Terry (1887–1971) brought labor-saving techniques to animation and produced an astonishing number of cartoons—at least 1,300 by some counts. Like so many early animators, he got his start as a newspaper cartoonist. As the story goes, Winsor McCay’s Gertie the Dinosaur inspired him to switch to movies, and by 1916 he was producing the Farmer Al Falfa cartoons for Bray Studios. After World War I, Terry formed his own studio, Fables Pictures, with backing from the Keith-Albee Theatre circuit. The alliance not only brought reliable production funding but also guaranteed coast-to-coast distribution through the theater chain.

The stock-in-trade for Fable Pictures was Aesop’s Film Fables, a series of cartoons loosely inspired by the ancient Greek storyteller—and celebrated for never missing a weekly release over its run from 1921 through 1929. An ideal vehicle for the animator, the classic fables illustrated moral lessons and used as their characters animals that talked and acted just like people while retaining distinctive animal traits. In their early years Aesop’s Film Fables put a cast of donkeys, lions, frogs, canaries, flies, ants, dogs, cats, tigers, bees, foxes, and wolves to work in modern retellings of the ancient tales. However much they strayed from their roots, the cartoons always adhered to the time-honored fable form by ending with an aphorism. More punchlines than universal truths, the aphorisms often had but a tenuous link to the story, but that was part of the point. “The fact that they’re ambiguous makes ‘em funny,” Terry said.

Henry’s Busted Romance is a tale about a lovesick tomcat. Spotting a theatrical poster for Mademoiselle Kitty, he feels his passion surge and consults a fortuneteller for advice. “You are in love,” the cat is told and should pop the question at once. At the theater, the cat endures several acts (surely not players on the Keith-Albee Theatre circuit!), but makes little headway with Kitty, who leaves after the show with a top-hatted dog. When Kitty’s date proves to be a robber, our hero saves the day and returns with his ladylove to her home—and her brood of kittens. Tomcat makes a quick exit. As we are reminded in the final title card, “2600 Years Ago Aesop Said 'Anticipation is greater than realization.' ”

Henry’s Busted Romance was released in November 1922, at the end of the studio’s second year. With the coming of sound, Terry sold his company and went on to start Terrytoons, where he created such animal favorites as Mighty Mouse and Heckle and Jeckle.

About the Preservation
Henry’s Busted Romance was preserved in 2012 at Film Technology Company, Inc., from a 35mm tinted nitrate release print found at the New Zealand Film Archive. The work was supervised by the Library of Congress and funded by the National Film Preservation Foundation.