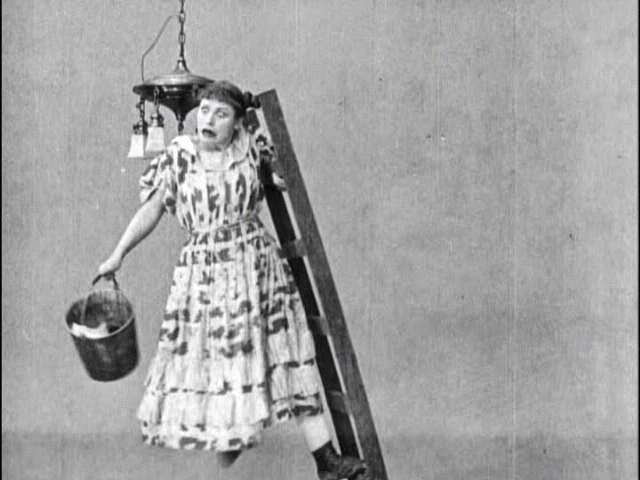 Films fade from collective memory unless they can be seen. Fortunately, the recovery of “lost” silent-era movies from the New Zealand Film Archive enables us to reverse the process by putting forgotten movies back into the limelight. Her First Kiss and its featured comedian Ethel Teare deserve this second chance.

Her First Kiss was produced by the Fox Film Corporation’s Sunshine Comedies unit. Over the years Sunshine Comedies have become the “Holy Grail” for some silent comedy aficionados—not just because so few works survive but also because the production values of those that are left are so astonishing. Capitalizing on the ample resources at Fox, the company specialized in elaborate gags and special effects. At other studios actors might be upstaged by such Rube Goldberg–like antics but here performers rose to the challenge with perfect timing and audacity that matched the absurd comic situations they faced.

Of the two leads in Her First Kiss, George “Slim” Summerville—the “swell-headed villain”—is still familiar thanks to his later talking roles in All Quiet on the Western Front (1930) and low-budget comedies with Zazu Pitts. The revelation is his “soft-hearted victim” Ethel Teare. Almost completely forgotten now, the Arizona vaudevillian had won a following by 1915 as a regular in Kalem’s “Ham and Bud” comedies. Moving Picture World credited her popularity to her “alluring beauty”, “charming screen personality”, and “ability to wear bewitching gowns in a natural and graceful manner”. Motion Picture News added that she was “equal to all occasions required by the [Ham and Bud] scenarios.”

That’s certainly the case three years later in Her First Kiss, where the glamorous Teare trades her fancy gowns for the rough attire of Minnie Spuds, the gawky farm girl who Chester tries to swindle. Whether dangling from a ladder, teetering over a cliff in a horse-and-buggy, or wielding a mop, Minnie may be from the sticks but never misses a beat. Although the film’s ending is missing, we should be grateful for what survives and keep our fingers crossed that more Sunshine Comedies turn up in archives abroad!