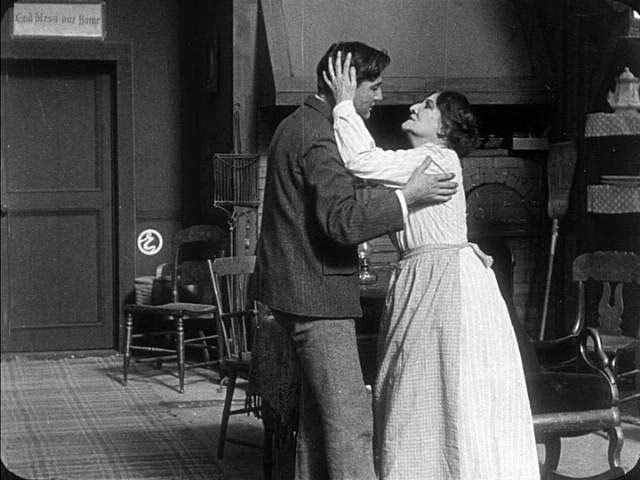 This holiday-themed melodrama released by Edison Studios in 1910 concerns Robert, a young man who leaves his mother’s home in New England to forge a career in the big city. When he achieves “fame and fortune” six years later, his proud mother can’t wait to welcome him home for Thanksgiving. Robert, however, intends to stay in the city to enjoy a holiday feast with his society friends and beautiful fiancée. When Mom decides to pay a surprise visit on Thanksgiving Day, she is saddened to find that her son is so ashamed of her that he relegates her to an upstairs room, out of sight and out of mind. As Mom tearfully prepares to retreat home, Robert’s compassionate fiancée discovers her plight and takes the distressed woman under her wing. In a heartwarming display of contrition, Robert welcomes his mother to Thanksgiving dinner as an honored guest among his posh friends, who all welcome her with open arms.

In addition to inventing the light bulb and cylinder phonograph, Thomas Edison’s laboratory had famously made momentous contributions to the development of the motion picture industry. Edison and his skilled staff, including assistant William Kennedy Laurie Dickson, had dipped their toes into the new world of the moving image through the invention of the Kinetograph and Kinteoscope, creating hundreds of early short films as they experimented along the way. The company had started with brief actualities just a few seconds long, and graduated to longer and more complex stories of comedy and drama for public exhibition. Consumed primarily with the technology of the equipment and not storytelling, Edison was never interested in directing the films himself. Instead, his lab employed a number of directors, including noted early pioneer Edwin S. Porter, to oversee the creative process.

Edison Studios prided itself on delivering quality motion pictures to theater owners and audiences. “Edison Films are works of art,” stated an early advertisement for the company. “In story, action and photography they set a standard for other manufacturers. Go to any licensed theatre in any town and see any Edison Film. That is the best way to judge the possibilities of the photoplay. The little Edison trade-mark has come to represent a guarantee of excellence that is recognized by exhibitors and their patrons alike…If it’s an Edison, it has no superior.”

Upon its release, Variety reported that “A young man in one of the theatre boxes wept silently, which was the best testimonial imaginable for this picture. There is a telling sentiment which impinges the heart and impresses the mind…well acted and nicely photographed.” The Nickelodeon, an early film-centered publication, said, “Not an element of the situation is strained or improbable. It is all warm and human. The production shines at all points and the acting could scarcely be bettered. The piece applies especially to the Thanksgiving season, but it would be appropriate and welcome any day in the year.” — Andrea Passafiume

About the Preservation
His Mother’s Thanksgiving was preserved under the direction of The Museum of Modern Art from a nitrate print uncovered in 2010 at the New Zealand Film Archive. The work was completed in 2013 by Colorlab Corp. through the support of a Save America’s Treasures Grant secured by the NFPF.