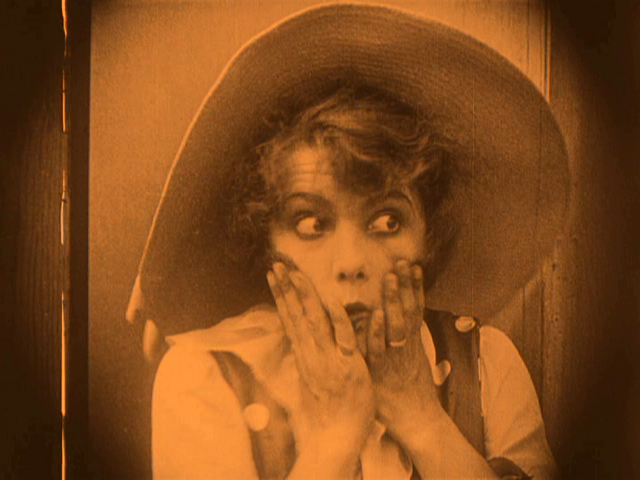 Before American film studios succumbed to the perpetual sunshine of Hollywood, they made movies throughout the east coast. Though New York and New Jersey were the major centers of production, Pennsylvania had a studio of its own, the U.S. Motion Pictures Corporation. Based in Forty Fort, across the Susquehanna River from the city of Wilkes-Barre, it was headed by James O. Walsh, a wealthy New Yorker who enticed local investors into building a state-of-the-art steel-and-glass studio in 1915.

A year later the USMPC signed a deal to supply Paramount Pictures with a series of single-reel comedies. Named for the locally mined anthracite coal, the Black Diamond Comedies were among the very first released by Paramount. Though USMPC used local talent—the cameraman was the police chief and the treasurer later served four terms as Wilkes-Barre’s mayor—the series was mostly directed by industry veteran Billy Quirk, a star comic at Biograph and Vitagraph.

His Neglected Wife is one of 24 Black Diamond Comedies that were re-edited, re-titled, and released as “Unique Comedies” in 1919. Its original title remains unknown—the year of its initial release was probably 1917. “Susie,” the recurring heroine of the series (played by Leatrice Joy) is the wife in question; fed up being married to an impecunious writer, she leaves him a note (“As a writer you are a flivver [jalopy]. I'm off to get a six cylinder start”) and flees to the city. Her husband secretly follows her, enduring a great deal of symbolic punishment along the way.

The film stretches slapstick across the plot of a bawdy farce—with gags involving ladies underwear and crossdressing—and enacts a battle of the sexes between lecherous men, filmed in leering close-up, and forceful women. Susie avidly manhandles her husband, grabbing him by the hair, shoving his face, and stuffing him into a trunk, while a gaggle of girl scouts knock over an old playboy. Much of the action occurs within a Wilkes-Barre landmark, Hotel Sterling, demolished in 2013. Its nameplate can be seen on a column in the lobby, where the moving camera follows the characters as they flirt. An impressive defenestration from one of the upper rooms nods to one of the specialties of the series—trick photography and stunts.

The Black Diamond Comedies were apparently well received—Picture Play’s “Screen Gossip” column enthused, “At last Paramount has added some jolly good comedies to its program […] judged by the first few releases, they are fully up to the standard which Paramount has set for its other offerings.” But after World War One the industry consolidated in Hollywood and one-reel comedies lost their appeal. Paramount began distributing two-reelers from Fatty Arbuckle in 1917, and the next year the USMPC lost its contract. It tried rebounding with a second series, the Rainbow Comedies, but the studio was done for by 1920. After a short stint as a laundry it was demolished.

Leatrice Joy wasn’t there to experience the studio’s end. She left for Hollywood in 1917 and became a star, with glamorous roles in Cecil B. de Mille’s Manslaughter (1922) and The Ten Commandments (1923). But judging from her exuberant and indomitable performance as Susie, she missed her true calling in screwball comedy, a genre His Neglected Wife anticipates with glee.

About the Preservation
A 35mm nitrate print of His Neglected Wife was found at the New Zealand Film Archive in 2010. Preservation work was undertaken by Colorlab, under the direction of George Eastman Museum, as part of a Save America’s Treasures project. Funding was provided by Wilkes-Barre attorney and local historian F. Charles Petrillo. The NFPF salutes his dedication to his hometown’s filmmaking heritage.

Further Reading and Viewing
In recent years Wilkes-Barre has rediscovered the USMPC through newspaper articles—including “Quiet on the Set!” by Matt Hughes for the Times-Leader and “Hollywood on the Susquehanna” by Elizabeth Skrapits for the Citizen’s Voice—and a Black Diamond Comedies website, created by King’s College students under the direction of professor Noreen O’Connor.

Only four films survive from the USMPC; the Black Diamond comedy Her Fractured Voice (1917) is available for viewing at the Internet Archive.