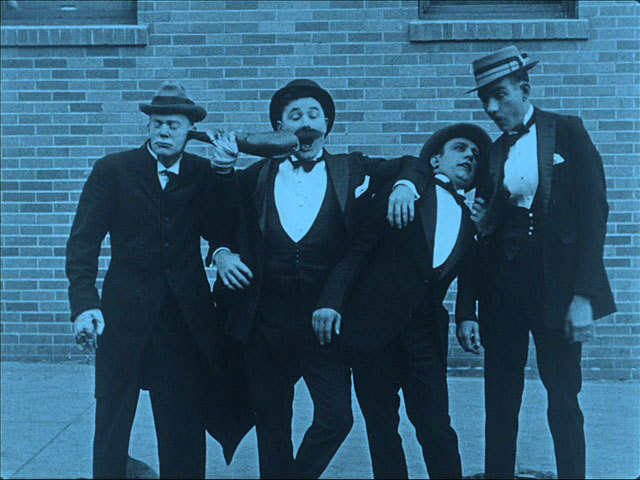 One of the great second bananas of silent comedy, Al St. John was the nephew of Roscoe “Fatty” Arbuckle, who’d promised St. John’s parents to keep their son out of the movie business. That didn’t prevent Arbuckle’s wife Minta Durfee arranging for an impressed Mack Sennett to catch St. John doing bicycle tricks. Initially hired for stunt work and bit roles (including a Keystone Cop), he became a reliable foil to Arbuckle, his stringbean physique providing an amusing contrast to his uncle’s heft in classics such as Fatty and Mabel Adrift (1916).

When Arbuckle left Keystone to form Comique, his own production company, St. John followed. Starting with their fist production, The Butcher Boy (1917), they were joined by a young vaudevillian named Buster Keaton. By 1920 Arbuckle was promoted to features, leaving Keaton as Comique’s star. St. John went solo and spent the rest of the decade starring in shorts for Paramount, Warner Brothers, Fox, and Educational. Several were directed by Arbuckle, whose acting career had been wrecked by the Virginia Rappe scandal in 1921.

His Taking Ways is one of four films made for Biff Comedies, owned by independent producer Samuel Bischoff. St. John plays a hearing-impaired burglar who bumbles his way through a suburban break-in. One wonders how a criminal of such incompetence could be responsible for a “200 per cent” increase in burglary, but the premise is just an excuse for St. John to obliviously destroy household furnishings.

When playing alongside Arbuckle, St. John portrayed a grotesque, manic rube in tight, ill-fitting clothes. Here he wears an oversized evening coat (all the better for hiding sledgehammers) and acts relatively straight-faced. Despite his talent as a performer, St. John was never promoted to features, and this short’s routine structure and direction (the gags are mostly generated through editing) might suggest why. His Taking Ways works best when the camera stays still long enough to accentuate the contrast between St. John’s in-character bumbling and acrobatic performing, as he swiftly pivots on his heel, expertly somersaults, intercepts a falling bottle, or duck-walks across a table.

The Biff Comedies were produced by the Van Pelt brothers for Bischoff, but the production credit of His Taking Ways is assigned to poverty row producer Trem Carr, who later co-founded Monogram Studios. He receives the same credit for Hollywouldn’t (1925), another Biff production that was also rediscovered in New Zealand and preserved through NFPF funding.

St. John continued starring in shorts up to 1932—several sound comedies were also directed by Arbuckle, whose rebounding career was cut short by his premature death. Afterward, St. John went into B Westerns, playing the beloved cowboy sidekick “Fuzzy Q. Jones” for nearly two decades. Regardless of genre, he was a superb second banana.

About the Preservation
His Taking Ways was preserved under the direction of the Library of Congress from a 35mm tinted nitrate print uncovered at the New Zealand Film Archive. The work was completed in 2010 by Colorlab Corp. with support from the NFPF.