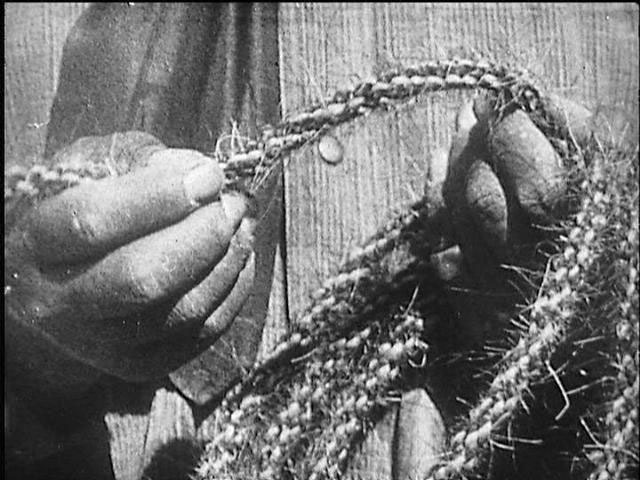 “All the real cowboys have gone into the movies,” we’re informed by Womanhandled (also featured in Treasures 5). That’s true enough in the case of Pedro León, who demonstrates here just one of his vaquero skills—using only a piece of wood and horsehair. León’s transition into the movies came via the 101 Ranch’s Wild West shows, where his acts included lassoing four galloping horses with his right hand, then four more with his left. After the 101 Ranch was hired by film producer Thomas Ince, León was put in charge of studio cowboys and began to perform roping stunts for the camera. He made the Los Angeles Times in 1915 for lassoing a sea lion out of the Pacific for use in an Ince production.

How the Cowboy Makes His Lariat was seen widely in theaters within the film magazine Paramount-Bray- Pictographs. Each of its weekly reels consisted of two or three topical segments alongside a cartoon. Bray was an animation studio—better known for streamlining the cartoon process than for wit—that branched into live action when it took over Paramount Pictographs early in 1917. How the Cowboy Makes His Lariat was part of issue no. 84, released September 10, 1917, which opened with a cartoon titled Quacky Doodles Sings the Pledge (the family of lovable ducks turning presumably patriotic after America’s entry into World War I) and featured two more live segments, A Quail Hunt in Ole Virginny and A Scenic Gem from South America. Other 1917 Paramount-Bray-Pictographs had Western-themed pieces, including The Desert Harvest, Mission Life in California, and the intriguing-sounding De Indianizing the Red Man—but none of these is known to survive.

The single surviving copy of How the Cowboy Makes His Lariat ends abruptly and may originally have been slightly longer. Pedro León is never seen making a lariat (used to catch horses or cattle), instead weaving an elaborate horsehair cinch (used to secure a saddle). There’s an elegant economy here in deriving from the horse the tools to ride it. “All cowboys know how to do this,” reads one intertitle. Maybe so, but nine decades later this little film remains genuinely educational.—Scott Simmon

About the Preservation
How the Cowboy Makes His Lariat was preserved by George Eastman House in 2005 from a 28mm Pathéscope copy, through a Save America’s Treasures grant, a collaboration between the National Endowment for the Humanities and the National Park Service. A number of nonfiction films have survived only thanks to 28mm Pathéscope copies on nonflammable safety stock. The Pathéscope Library was a successful early distribution scheme for home and nontheatrical viewing. It offered films for rental and sale not too long after their theatrical runs, similar to the home video distribution window introduced decades later. How the Cowboy Makes His Lariat became available in 28mm through the Pathéscope Library in January 1918, four months after its theatrical debut.

For research about this film and its distribution, our thanks to Daniela Bajar, Jennifer Blaylock, and Walter Forsberg. Don Reeves, who provides the audio commentary, also thanks preeminent horsehair craftsmen Ernie Morris and Doug Krause.

About the Archive
George Eastman House in Rochester, New York, is the most comprehensive museum dedicated to the photographic and moving image in all its forms. Housed on the estate of George Eastman, the founder of Eastman Kodak Company, the museum brings together photographic equipment, still images, motion pictures, posters, and library materials documenting the history and impact of photography.

The motion picture department has a diverse collection, including many films that survive only in rare 28mm prints. Special strengths are early films from France, Britain, and the United States, avant-garde cinema, and American features. Eastman House’s extensive nitrate collection is stored in the Louis B. Mayer Conservation Center, established in 1995. The museum hosts an active film screening program in its Dryden Theatre.

About the Commentator
Donald W. Reeves is McCasland Chair of Cowboy Culture at the National Cowboy and Western Heritage Museum in Oklahoma City. An expert in regional cowboy traditions, Don worked closely with top saddle makers, bit and spur makers, rawhide braiders, and silversmiths to form the Traditional Cowboy Arts Association in 1998 and has curated the association’s annual exhibition since 1999. Over the years he has curated many other exhibits at the museum, including The Guitar: Art, Artists and Artisans (2010), Luis Ortega’s Rawhide Artistry (2004), Western Roping (1984), and Gauchos of the Pampas (1983).